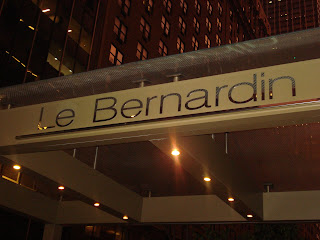 Le Bernadin, if you’ve been paying any attention to food for the past few years, you know just how much weight that name carries. Just in the past year, I can think of two major expositions of Eric Ripert’s masterpiece. First, Le Bernadin was the setting for an episode of the last season of Top Chef, and wasn’t Ripert a charmer? Second, Ripert’s buddy, Anthony Bourdain, listed Le Bernadin as one of his 13 places to eat before you die.

With these sorts of endorsements and publicity, I was sitting on the edge of my seat during the entire flight from Atlanta to New York. After a mad race from Le Guardia to Times Square to my hotel, I covered the final leg of the journey and stepped into the tranquility of Le Bernadin.

Catching my breath, I was delighted to receive a complimentary glass of champagne. Soon after that came a lovely amuse bouche. 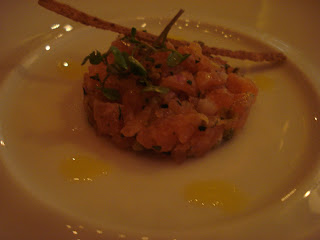 I apologize for the less than stellar lighting of most of these pictures. I usually have no problem being the conspicuous man with a constantly flashing camera, but something about Le Bernadin made me hesitant to use the flash. Anyway, the salmon tartar amuse bouche was a real delight. The salmon was obviously the starring role, but the green onions played a great costar. This really seemed to be an example of letting high quality ingredients speak for themselves.

After receiving a menu, I had a little internal debate. While the four course menu had a wonderful variety, I felt that I would be letting me and my small contingent of readers down if I didn’t have the chef’s tasting menu. 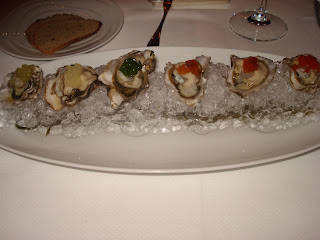 The first in my 8 course meal was a progressive tasting of kumamoto oysters “en gelee”. From left to right, each gelee was supposed to change from light and refreshing to complex and spicy. I did my best to write down all the flavors, and from left to right they were green apple, Japanese mint (in the middle), ponzu, dashi, and lastly kimchi. To be quite honest, I couldn’t taste any of the gelees until the Japanese mint in the middle, but my favorite was definitely the kimchi on the far right. I love the combination of a bold kimchi flavor and the subtle kumamoto oyster. In addition to the oysters, I had a glass of Kasumi Tsuru, Yamahai Ginjo, Hyogo sake. Not being a fan of sake, I did my best to savor each sip with an oysters, and the flavors melded beautifully.

Second in the line of eight dishes is the extremely washed out poached, pastured egg. 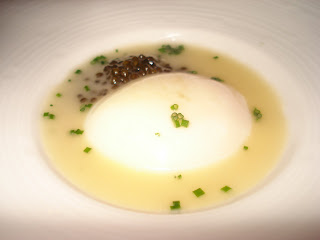 Not only is there a lovely poached egg, there is also ostera caviar, a mariniere broth and an English muffin. As much as I enjoyed the oysters, this dish was what I was expecting from Ripert. The egg was perfectly poached and its flavor was only heightened by the deliciously salty caviar and savory broth. At the urging of the waiter, I tried a little of the English muffin with the egg & broth mixture, and what a treat that was. Although, I soon realized why the muffin tasted so good; it was literally dripping with butter. Still, who comes to a restaurant like this to eat a light meal. Also, I loved the wine for this course; who doesn’t like a glass of 1995 Dom Perignon - Moet & Chandon?

The decadence continued with the third course: an ultra rare scorched scallop. 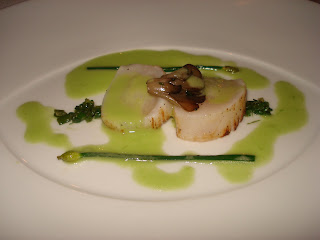 Served with a ramp- goat’s milk butter emulsion, I was expected this poor scallop to be completely overshadowed by the emulsion. I should have known better, the sauce perfectly complimented the scallop. Even more amazing was that the scallop was at the forefront of the dish. Usually, scallops are lost in a sea of cream sauces, but here it was 75% scallop and then 25% ramp & goat’s milk butter. Unbelievable, and another stellar wine, but this time from Austria; it was a sauvignon blanc “moarfeitl” from Neumeister, Styria/ Austria 2007

Fourth in line seemed to be a simpler, lighter dish. 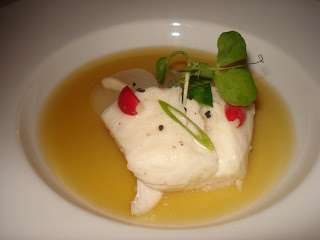 Pictured is a poached halibut with braised daikon, baby radish and turnips in a sesame court bouillon. I know that halibut is a flaky fish, but once it was poached it was fork tender with a smooth, buttery texture that was only complimented by the subtle sesame flavor of the court bouillon. While the fish on it’s own was great, it was superb with a spoonful of court bouillon. I was really enjoying everything that Le Bernadin had to offer, especially the wine, traminer, Domaine Andre Tissot, Arbois, Jura 2006

Soon after the halibut came the last fish dish, a sautéed codfish. 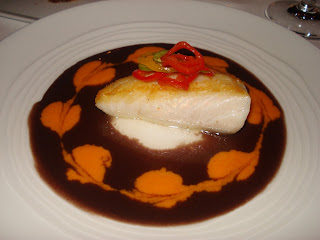 It was fascinating to watch the presentation of this dish. Any dish involving a broth or sauce arrives in separate parts. The fish was brought on the plate and then a octopus sauce was delicately poured around it. After that, the basquaise emulsion was dollop around the fish and then fashioned into the elegant presentation you see above. As amazing as this dish was, I was still enthralled with the halibut, although the baby bell peppers were amazing. This dish also featured an interesting side item. 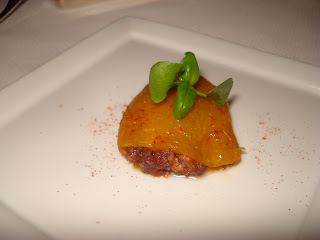 This is a baby bell pepper stuffed with chanterelle mushrooms, and I thought this little pepper was the star of the dish. Once again, it was all perfectly complimented by the wine: pinot noir, by Farr, Geelong, Australia 2005

My last savory dish was Ripert’s version of a surf and turf. 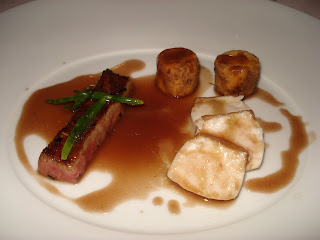 Nothing understated here as the dish is escolar poached in olive oil, seared kobe beef, a sea bean salad and eggplant fries, and Mr. Kaufman’s pesto and anchovy sauce. I’m not sure who Mr. Kaufman is, but his sauce is wonderful. The escolar was slightly crisp on top, but velvety smooth throughout the rest. The eggplant fries were spectacular, almost like an eggplant cream puff. Lastly, the kobe beef was buttery and went perfectly with the pesto and anchovy sauce. As I was enjoying the last piece of kobe, I thought this is what beef should be, a sense that was only heightened by the heartier Chateau Haut-Bages Averous, Pauillac Bordeaux 2001

After my six savory dishes, it was down to the final two, the sweet. 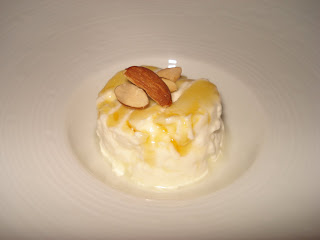 It’s always impressive when a restaurant has exclusivity, and this artisan fromage blanc is produced by the Vermont Butter and Cheese company exclusively for Le Bernadin. Served with toasted almonds and honey, this tasted like extremely fresh yogurt, something only enhanced by the use of almonds and honey. Needless to say, I enjoyed it thoroughly. Like sakes, I rarely indulge in dessert wines, but the Takaji, Late Harvest, Oremus, Hungary 2005 went with this cheese as well as the honey and almonds.

You would think that seven courses, including the amuse bouche salmon tartar, would be sufficient, but I was also treated to an intermediate dessert dish. 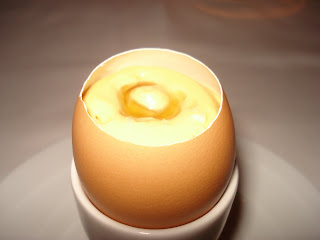 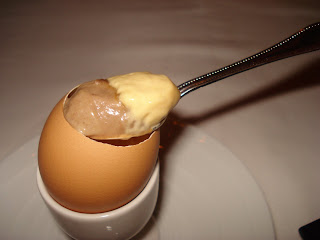 A decadent mélange of flavors, I could truly eat this all day. This sort of dessert really is overindulgence to a T. 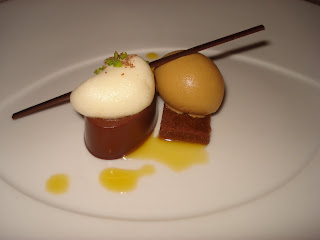 The standout from this quartet was the chicory ice cream. It really reminded me of café du monde chicory coffee, something I always wish was made in ice cream form. In an effort to accompany all these flavors, the sommelier had chosen a museum muscat, reserve nv, Yalumba, Rutherglen/Austria.

I thought my meal was finished, little did I know. 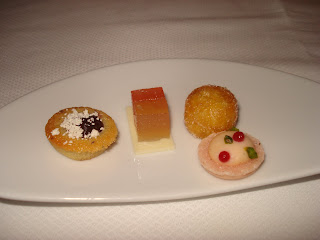 Of course I need a plate of after dinner treats, I’ve only had 10 courses. Actually these tiny morsels of olive oil cake, crème & patty, and a beignet were better than the final dessert course. I was especially a fan of the beignet. If only they had combined the beignet and the chicory ice cream, then it would have been outstanding

It doesn’t matter where you are, 11 courses in a meal is quite a lot, and the bill definitely reflected that. Regardless, I thoroughly enjoyed my meal at Le Bernadin. It was exquisite, but not the life affirming meal that so many yelpers and bloggers had described. If I were to come back, I would certainly avoid the tasting menu. As much as I enjoyed the pomp and circumstance of 8 courses with wine, it got a bit old after a while. However I think that Ripert said it best at the end of his menu: “fish is the star of the plate not the chef.” I had come to Le Bernadin expecting miraculous things to be done with fish, and I had experienced that through the use of excellent ingredients and minimal interference.

I don't care if you were a bit underwhelmed, I can't wait until the day i find myself at Le Bernardin. The oysters scallop and poached egg looked good enough to kill for.

On another note overly extravagant tasting menus are my favorite way to eat. If a restaraunthas a tasting I am getting it and I usually tell the waiter to bring it on, so to speak. You must submit, eating is an act of submission.

I may have been underwhelmed, but only because of the plethora of yelp reviews I read before hand. It was still an amazing meal.

I too love a tasting menu, but like I said, if I came back I would order off the regular menu. The tasting menu was a great and thorough introduction to Le Bernardin, but I want to do a little exploring on my own next time.