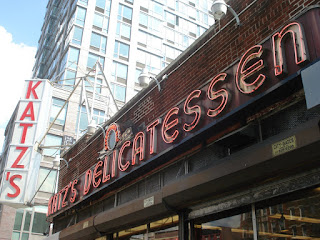 I’ll admit, I’ve been to Katz’s deli before and I played the ultimate tourist role. I ordered a bowl of matzo ball soup. Thankfully I also ordered a pastrami on rye. Now, two years later, I was back in and Katz had made it onto Bourdain’s “13 Places to Eat Before You Die” list.

So after day two at the fancy foods show, Paul and I met up with his nephews, Joseph and Little Paul, at Katz Deli for the best pastrami in town, possibly the world. 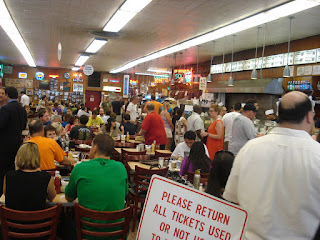 First thing that you get when you walk into Katz is a ticket. It’s best advised to not lose your ticket, it’s a $50 penalty to pay without a ticket. Ticket in hand, you find a line for a cutter.

I found a short line and waited my turn for my own sandwich. Minutes later I put in my order and did my best to watch a master carver at work. 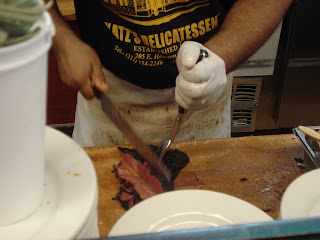 There’s not much elegance his method, it’s about efficiency, speed, and a good tip.

A nice extra is that each carver gives you a sample slice when you order your sandwich. 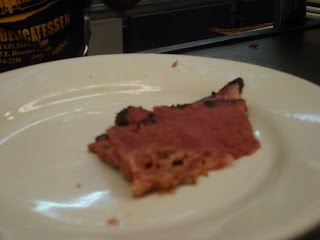 I realize it’s a bad picture, but it’s amazing pastrami. 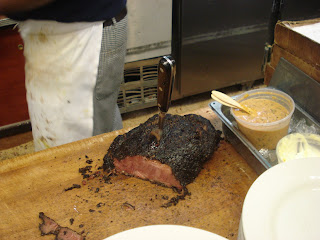 Seeing that hunk of pastrami, I was seriously figuring out the logistics of taking one home, but I wimped out.

In no time at all, my order was ready. 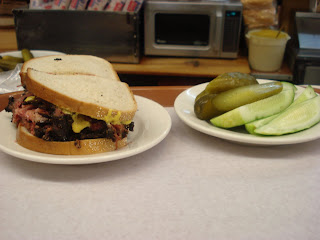 Slathered with mustard and with a side of excellent half sours, it’s a pretty fine lunch. 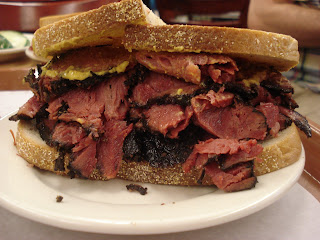 A close up of the masterpiece, and taking a bite revealed just how much better Katz is than the Carnegie Deli. The pastrami is beautifully tender without that slimy feel and taste of the Carnegie.

Extremely filling, hugely satisfying and cheaper than the Carnegie Deli, I really can’t see a reason why you would go anywhere besides Katz Deli. The pastrami sandwich was honestly one of the best I’ve ever had, and as often as Bourdain seems like a prick, the man knows his food and he hit Katz Deli dead on.