Julep is one of those places that I’ve been meaning to write about for quite some time. The problem is that I’ve never really had an urge to go back. It’s not to say that I’ve had poor dining experiences, it just doesn’t have anything that makes me want to return for my next meal.


However, after a quick shower on Friday evening, my friend Alvin texts me and ask about my Friday dinner plans. Long story short, I make my way from to Julep to enjoy dinner with Alvin and Kate. The downside to this situation is the timing. 8 on a Friday night is the perfect way to receive subpar service.

Nevertheless, as soon as I arrive, I put in an order for the portabella fries appetizer. 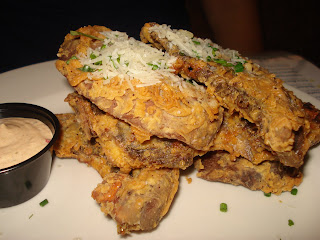 The first thing I noticed is how much larger these portabella fries are than the ones at ’s Drive In. Taking the first bite, I’m surprised at just how crispy these fries are. Usually mushroom or eggplant fries had a little interior sogginess to them, but Julep has avoided that pitfall. However, I soon realize just how salty the mushrooms are. I first blame the lackluster chipotle tartar sauce, an accompaniment that brings nothing worthwhile to the table, but I realize that it is the crust on the mushrooms that is so salty. Even with a generous size and portion, I’ll be sure to avoid the portabella fries the next time around.

As I was driving into Julep, I already knew which entrée I would order: the fried chicken. Julep is known for their fried chicken with a honey rosemary glaze, and I had never tried it. 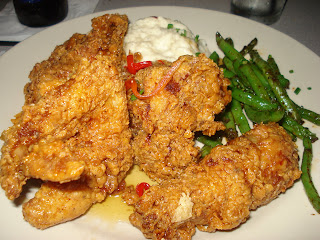 I can’t fault them for presentation, but the site of half a fried chicken that is covered in honey would bring a smile to anyone’s face. Starting with the drumstick, it was just like the portabella fries. I was amazed at the crispiness of the skin, and the meat underneath was extremely moist. Unfortunately, outside of the honey, the chicken had no real flavor at all. If there was the tiniest shred of flavor it was completely masked the rosemary honey. I was also annoyed by how both the thigh and breast had been deboned. I had been assured by the waiter that the half chicken was served on the bone, but not. As a result, the breast was dry. In the end, you’re really left with a bland, poorly seasoned chicken that hides behind a veil of crunchy skin and rosemary-less honey.

Due to ’s graciousness, I was able to try a few bites of his shrimp and crits. 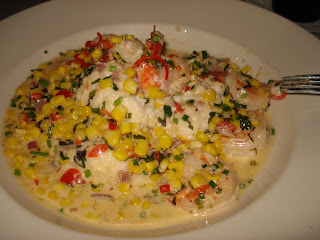 Quite frankly I was appalled at this waste of shrimp. I can appreciate that Julep might have been going for two forms of corn with the kernels and the grits, but it simply does not work. It’s a shame, the shrimp themselves aren’t badly cooked, they just are overwhelmingly bland. I could taste the slightest hint of cayenne in the dish, but I was completely turned off by the liberal use of corn, peppers, and onions. In fact, Alvin and I both agreed this dish tasted like a corn salad; definitely not the flavor I’m looking for with shrimp & grits.

Overall, I was completely disappointed in Julep’s “award-winning” fried chicken. Having been selected by USA Today as one of the top ten fried chickens in the country is no surprise. I’ve long maintained that the USA Today isn’t worthy of wrapping fish, much less reporting news or commenting on best foods. What surprised me was Julep had won Mississippi Magazine’s “best fried chicken in MS” for 2007. Apparently, the readers of Mississippi Magazine have never tried Mr. D’s chicken at the Lorman country store or even their local Popeye’s, both of which serve more flavorful and generally superior chicken.

I knew I that I should expect poor service during the dinner rush on a Friday night, but it’s simply poor planning to expect a single bartender to field both the bar and the half dozen bar tables. Julep is like many popular northeast restaurants. At one point it might have served excellent food, but now people automatically come, regardless of the actual quality. For the money I spent at Julep, I could have eaten like a king at the Thai House less than a mile away. Needless to say, it will be some time before I’m lured back to Julep.

has the cynical cook ever worked in a restaurant?

I must agree Julep's food is not the best in Jackson, but to talk about walkers in the same review is like comparing apples and oranges even if you are talking about the portobello fries. Which walkers does better then any other place that has tried to serve them. I have tried them at several other places in and around Jackson and walkers is still the best

^^i agree with you guys. p.s. shrimp and grits is a traditional cajun dish-regardless of whether your plate wasnt seasoned well, someones been thinking it works for a couple hundred years.
usually, there are two bartenders on crowded nights to tend to bar and table, but you shouldn't sit in that section on a crowded night with all the drunks and expect to have super attentive service.