It’s been a while since Sam and I have made a stop on our quest for the best bacon cheeseburger in Jackson, but the release of Mississippi Magazine’s “best of” issue was just the impetus we needed. In that issue, the fine people of Mississippi voted Mugshots as having the best burgers in the state. Wanting to see for ourselves, Sam and I met at the Mugshots off Lakeland.

After being led to our table by the waitress, I couldn’t help but notice how much this felt like a college bar. Maybe it’s the mostly college locations (Jackson, Hattiesburg, Starkville, Tuscaloosa), or the prominent stage, but I felt like I needed to find my frat letters and order a mug of something domestic, light, and cold.

Atmosphere aside, Sam quickly pointed out our target. Named the Savell, this burger features an 8oz patty of ground round. Dressed with hickory smoked bacon, cheddar cheese, mayo, lettuce, tomato, and red onion, this burger sounded right up our alley.

I was immediately a fan of the presentation. For only 8 ounces, the Savell seemed like a large burger with an even larger bun. 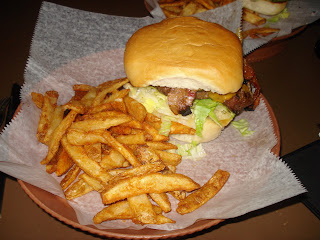 Taking a look under the bun, I was happy to see well melted cheese and a few slices of tasty looking bacon. 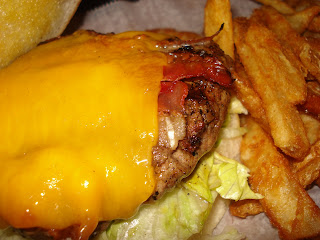 Looks aren’t everything, so we dug in. The first thing I noticed was just how cumbersome the bun was. There seemed to be half a loaf of bread wrapped around this piece of beef. Sam made the keen observation that the bun was sugary, yet bland. We both agreed this would be better with a classic sesame seed bun.

Unfortunately, our problems with the bun persisted. 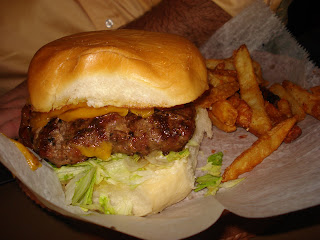 With more bread than burger, it was surprising when this burger ban to slide apart with ease. I found the best way to actually taste the patty was to ditch the bottom of the bun. Moving on to the bacon, it had a nice bit of hickory flavor, but each strip was too thin and was quickly lost in the mélange of bread and burger.

Once we finished, we both agreed there was simply too much mayo on the burger. There seemed to be almost as much mayo as there was bread. On a higher note, Mugshots serves some pretty tasty fries with their burgers. With a mix of crispy and not so crispy potatoes, my only real complaint was the uneven distribution of the great seasoning.

It was nice to be back on the hunt for Jackson’s best bacon cheeseburger, but like their choice of Amerigo for best Italian, I think the readers of Mississippi Magazine missed their mark here. I’ll admit, we were both fascinated with the challenge of “The Mugshot”. With 3 seasoned patties, 6 strips of bacon, cheddar and swiss cheese, mayo, mustard, lettuce, onion on the burger and beer battered fries, onion rings and a beer battered pickle, “The Mugshot” has to be finished in 12 minutes or less or you’re in the hole for $20. That’s quite a challenge, but Sam and I had our own challenge, and unfortunately, Mugshots is an unlikely choice for best bacon cheeseburger. They produce a solid burger, but I’ll wager it’s far from best in the state.