Time for stop 5 on the hunt for Jackson’s best bacon cheeseburger: Nick’s. I had been looking forward to this stop since I had made the list of potential candidates. I reviewed Nick’s last November, and I gave it a glowing review. Every time, I eat at Nick’s, I leave more than satisfied.

As soon as Sam and I arrived at Nick’s, we took a seat in the bar and began watching the latest episode in the serial drama that is American politics. In this case, it was Governor Sanford of South Carolina admitting he had a mistress in Argentina.

While watching his live confession, we put in our orders and a short while later our orders arrived. 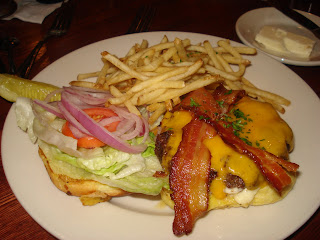 You’ll notice that Nick’s takes the same approach to a burger as Char. One major difference is dollop of mayonnaise you can see leaking out from under the patty.

After a quick q & a with the waitress, I found out another similarity between Nick’s and Char. They both use applewood smoked bacon. Regardless of the similarities, I had my burger ready for the first bite. 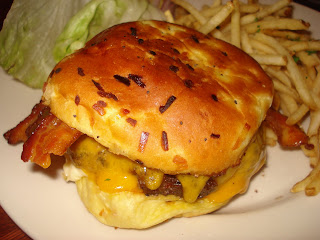 Unlike the jalapeno bun at Roosters, the onion bun at Nick’s had a very discernible taste that nicely complimented the rest of the burger.

Delving into the sandwich, I noticed that the Nick’s burger seemed to have more flavorful bacon than char. 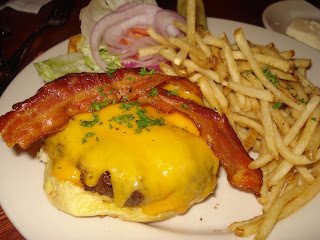 Although, I wouldn’t be surprised to find that they both came from the same supplier. Bacon aside, Sam and I were both surprised how well the mayo worked with the already juicy burger.

In seconds, both our burgers were gone and just a few errant French fries remained; fries that Sam jokingly described as “like crack: small, crispy, and addictive”.

We realized that we had made a critical error in our order of restaurants. Instead of the euphoric leap forward we had experienced going from Rooster’s to Char, we had taken a step sideways by going immediately to Nick’s.

Sam was insistent that Nick’s was better than the 8.5 he had given Char, but not better than a 9. I was torn as I had given both an 8.5. Like I had feared, by giving out actual numeric ratings, we had begun to paint ourselves in a corner.

Regardless, even with no clear winner between Nick’s and Char, we had decided that there were two strata of burgers in Jackson. Hopefully, we can find a greasy spoon or pub that serves a delicious bacon cheeseburger on par with Nick’s and Char, but until then, the rest of the contestants are on a lower level than our two frontrunners.