As I said before, I had an overabundance of vegetables from the garden. I needed something to do with zucchini, but I wanted something with an Asian twist. After an unsuccessful search through any of Fuschia Dunlop’s books, I turned again to the Food & Wine recipe database. A few minutes of searching pulled up the perfect solution: Manchurian Pork and Zucchini dumplings.

I’m not exactly sure what makes dumplings Manchurian, but I started with a medium sized zucchini. I got it as close as I could to a ¼ inch dice. 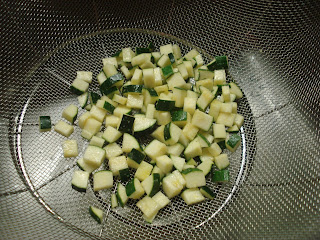 I then put the zucchini in a colander, tossed with ½ tablespoon of kosher salt and left it to drain for 30 minutes.

While the zucchini was draining, I get to work with the rest of the ingredients. 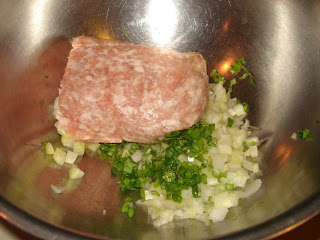 Staring with 1 rib of celery sliced into a ¼ inch dice, I added two minced scallions and ½ lb of ground pork. 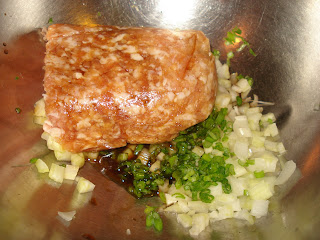 With nearly every ingredient added, I mixed everything together with a fork. 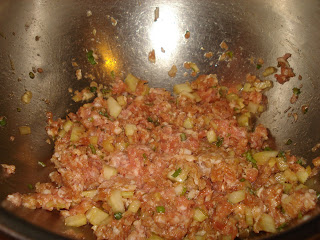 Not forgetting the zucchini, I rinsed it under cold water, squeezed out any excess moisture, patted it dry, and then added it to the bowl. 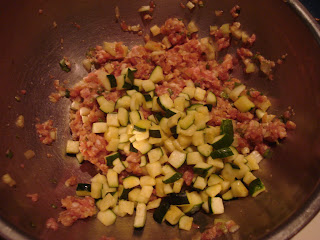 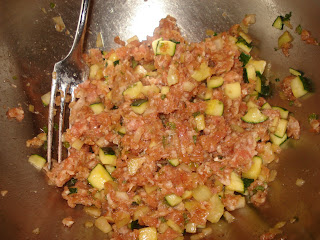 I had my dumpling filling ready to go.

Now for the hard part, the actual folding of the dumplings 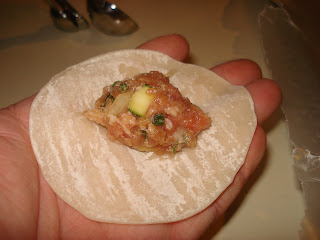 Starting with one gyoza wrapper, I took it in my hand and added one level teaspoon of filling. I moistened one edge with a small pastry brush and then folded it into a half moon. I then started to pleat the edges. 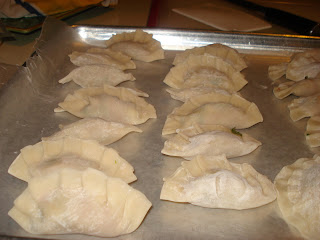 Soon enough, I had the hang of it and my platter was full of dumplings. 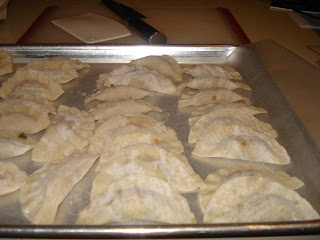 These on the right were made with a press. They seem too uniform and visually unappealing.

A better look at my pleated masterpieces. 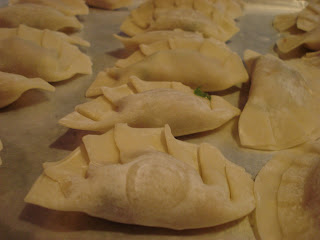 I had everything on a pan lined with wax paper. The idea was to cook a few now and freeze the rest for later use.

Wanting to enjoy the fruits of my labor, I heated a pan with a thin film of oil and added the dumplings. 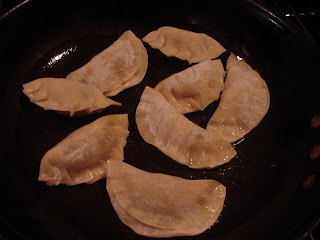 You can really tell the difference between the hand pleated and the pressed dumplings.

I decided to treat these dumplings like potstickers. I waited until the dumplings had formed a nice crust and had adhered themselves to the pan. I then poured in enough water to come halfway up the dumplings. 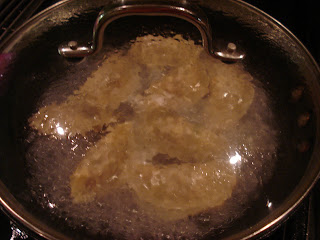 With the lid on, I only had to wait for the water to evaporate.

The first batch was soon ready. 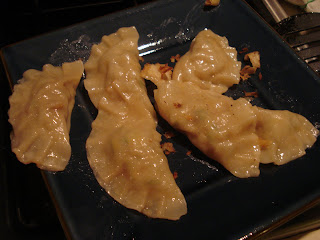 Sure they may look a little greasy, but they were delicious and soon had vanished.

With about 25 or 30 dumplings on the pan, I had hoped to freeze most of them. However, this was the fourth of July and everyone was hungry. I soon had pan fried the entire batch. Manchurian dumplings may not be your traditional July 4th meal, but I felt entirely patriotic when I was making dumplings and watching the fireworks from D.C. Besides, everyone gets tired of hamburgers and hotdogs.