There is a glut of vegetables from the garden. It’s overflowing with zucchini, squash, eggplant, okra, and black eyed peas. Unfortunately, the tomatoes are under attack, and production is nil. So looking to take advantage of the garden’s bounty, I started scouring the Food and Wine recipe database for some ideas.

After a few minutes of searching for eggplant, I came across something I’ve wanted to make for quite some time: baba ghanouj

I started right away. 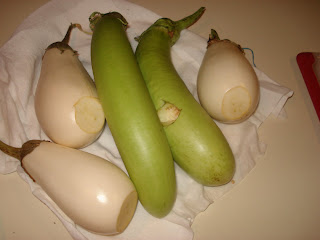 I realize the recipe calls for 2 large peeled eggplants, but I didn’t have any purple eggplants. Instead I had smaller green and white. After cutting out a few odd spots, I soon had them cut into rough 1 inch cubes. 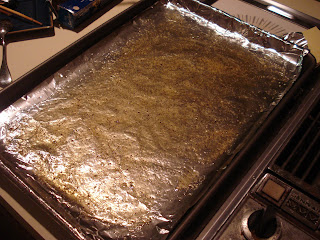 Next, I coated a baking sheet with aluminum foil and drizzled a fair amount of olive oil over the sheet. After mixing in about a ¼ teaspoon of kosher salt and fresh pepper 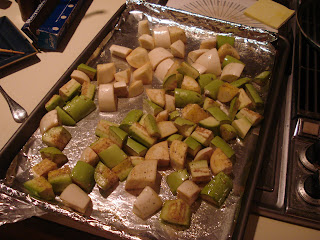 In went the cubed eggplant. 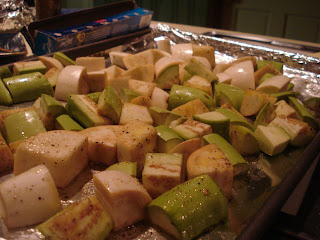 Doing my best to evenly coat each piece, I tossed the slices in the oil. The pan then went into a 450 degree oven to roast until “soft and golden”

Midway through, I pulled the pan out of the oven to toss the eggplant and to make sure nothing was burning. 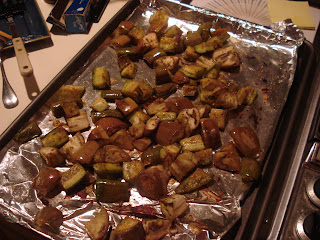 At the end of the cooking time, I grabbed the pan from the oven. 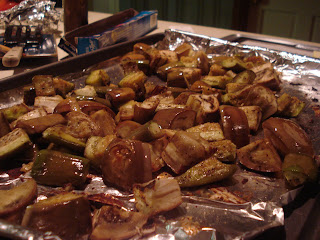 Everything looks “soft and golden”, maybe even a little brown.

From the baking sheet, all of the eggplant went into the food processor. 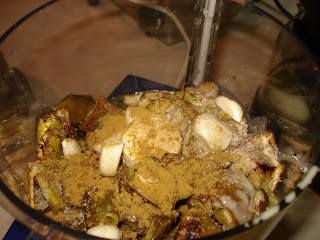 In addition to the eggplant cubes, I added the juice of one lemon (about a ¼ cup of juice), 1/3 cup of tahini, 4 or 5 cloves of garlic, and about ¾ teaspoon of ground cumin.

10 pulses later, I had a pretty good looking mixture. 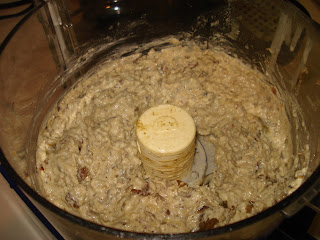 I decided to give it 3 or 4 more pulses

I realize that it doesn’t look very appetizing. 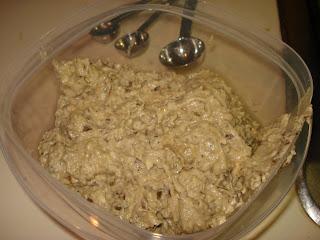 In fact, it looks like lumpy oatmeal, but when eaten with a little pita, this is an amazing dip.

After enjoying the fruits of my labor, I started to wonder how I would change the recipe. Even though I had added 5 cloves of garlic, I still wanted more garlic flavor. Also, I think it might need a little heat, maybe chili flakes or some jalapeno. However, that’s all for later,