I was fascinated to see the July issue of Saveur magazine. Named the Texas issue, these 100 or so pages were dedicated to all things culinary from the largest state in the continental US. Let’s be honest, you could fill 100 pages with just one street in Houston, still I was fascinated by what made the cut, especially Saveur’s “Twenty-four reasons why we love Texas”. Number 12, slow smoked brisket is one that really caught my eye. Always looking for a new way to cook brisket, I decided to give Saveur’s recipe a try.

Like nearly all good things barbeque, this recipe starts with a rub. 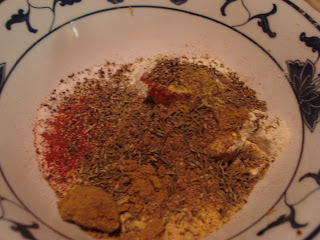 With the rub made, it was time to apply to the star of the show. 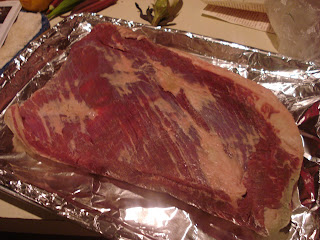 A lovely flat cut brisket, from Paul Anthony’s market, would be the recipient of said rub. 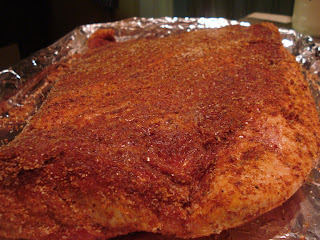 After a generous application of the rub, the brisket was looking pretty good. Now it was up to the rub to work its magic and that requires times. So, I put the brisket in the fridge and called it a night.

The next morning, I pulled the brisket from the fridge. 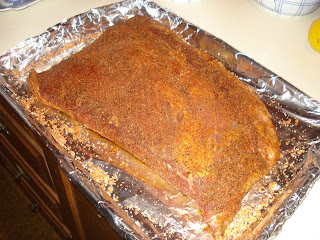 I wanted to give the meat a chance to come to room temperature. 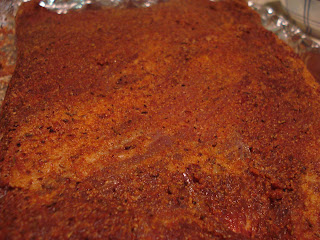 In the meantime, I took a closer look and was happy to see the rub had done its magic on the meat.

While the meat was losing its chill, I got my fire ready. 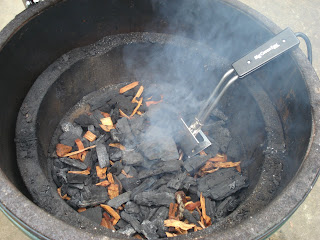 Yes, I’ve resorted to an electric starter for my big green egg. I know it’s lazy, but I simply don’t care. However, you will notice the nice distribution of pecan chips throughout. I would have preferred mesquite for this application, but you work with what you’ve got.

Once the egg was reading a good 225, I went inside to get the brisket. 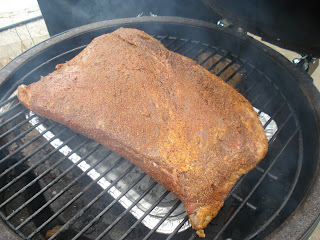 The recipe calls for a foil pan hall full of water to be placed under the brisket. After putting the thermometer’s probe into the brisket, I closed the egg up and set the alarm for 160 degrees. In the meantime, I got the rest of the ingredients ready. 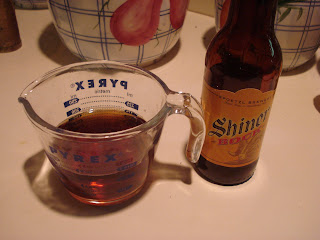 When the brisket has reached 160, the recipe calls for it to be wrapped in foil and doused with ¾ cup of warm lager. In the step by step pictures in Saveur, you can clearly see them using a bottle of corona. Not wanting to sully my brisket with flavorless beer, I went for the go to Texas beer, shiner bock.

The recipe said that it would take 4-5 hours for the brisket to reach 160, but it only took mine 3 hours. 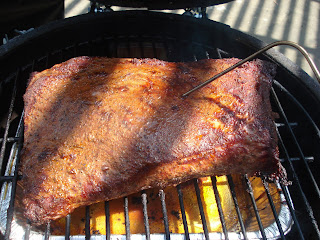 I was surprised how quickly it heated up. I checked and the egg was at a steady 225, and I reinserted the probe and came up with the same temp. Still, that’s a pretty tasty looking brisket.

After reaching 160, the recipe calls for the brisket to be wrapped in heavy duty aluminum foil. 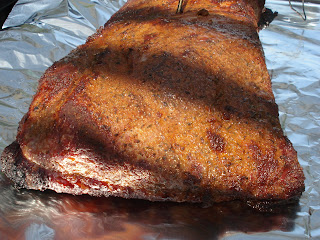 After that step, the all important beer is next. 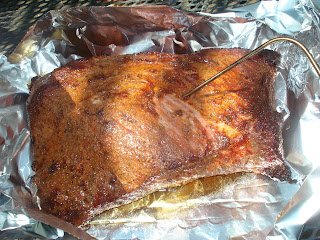 I realize it’s hard to see it, but there’s a nice pool of warm shiner bock under that brisket.

Once the beer and foil steps are finished, it’s back on the egg with the brisket. 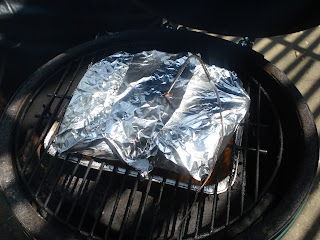 Getting the heat back to 225-250, the idea is to cook the meat until 190. Saveur estimates that will take about two hours.

Of course my grill races to that temperature and reaches 190 degrees in little more than an hour. Something has to be wrong, but I never did figure out what it was. Anyway, the recipe calls for the 190 brisket to be left to rest on a cooled, uncovered grill for one more hour. Knowing that leaving the egg open would just ignite more of the charcoal, I closed all the vents and snuffed out the flame.

An hour later, I pulled the foil wrapped beef off the egg and brought it inside. 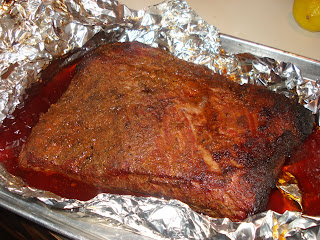 My grill might have been set on fast forward, but this was a fine looking brisket.

Oddly enough the fat cap seemed to be completely intact. 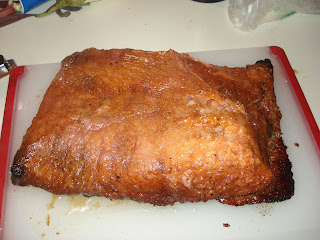 I’ve heard through the bbq grapevine that the new standard is to cook the brisket fat side down. The idea being that the fat would shield the meat from the heat and allow a more tender meat.

As soon as I took a few slices from the brisket, I was delighted with what I saw. 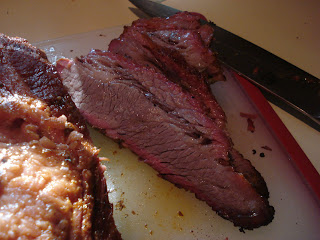 Not only are there nicely charred edges, there’s a beautiful smoke ring around the edge.

However the real test is the taste test, and I thought the brisket did very well. I wasn’t entirely satisfied with the rub, but it had imparted a great flavor to the beef. However, I think I might simplify next time and try a Kreuz Market style rub of salt, pepper, and cayenne. 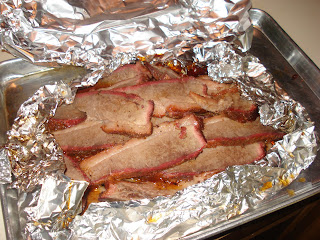 Anyway, I soon had the entire brisket sliced and ready to pack up. Over the course of the week, I gave samples to friends and coworkers and received rave reviews. However, I’m already looking forward to my next try at bbq brisket.

I am really fascinated with this plate, it really looks so lovely and I think that this recipe will be so tasty and everybody would be so happy eating. Buy Viagra Viagra