Cooking the book - Land of Plenty - Chili Oil (hong you)

Having exhausted my supply of chili oil, I knew it was time to whip up a new batch. Fortunately, I had been meaning to try Fuchsia Dunlop’s recipe from her book Land of Plenty.

It’s an extremely simple recipe that starts with a jar and ½ cup of chile flakes. 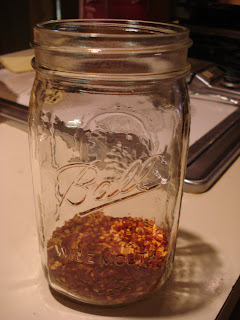 As an option, you could use coarsely ground chilies with seeds

Next, I decided to use the optional ginger. 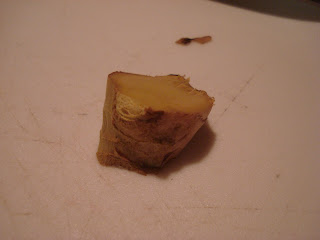 In a moment of sheer brutality, I crushed the daylights out of it. 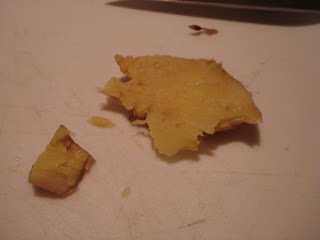 From there, I got 2 cups of peanut oil measured and ready. 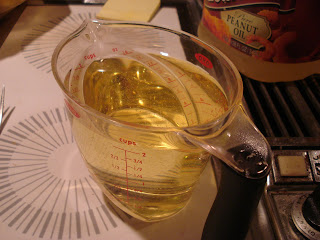 Another option here is to use corn oil, but I had gallon jugs of peanut oil on hand.

Now for the “interesting part” 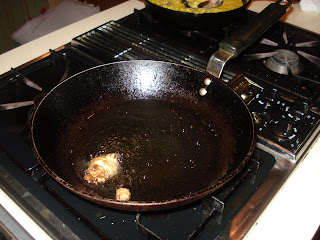 I put the spurs to my oil and ginger and began the long wait until smoking. While waiting, I decided to look up the smoking point of peanut oil. After finding out that peanut oil has a smoke point of 450 degrees, I knew it would be a while to heat up a full 2 cups.

Once it was smoking, I immediately turned off the heat and then left it alone. The idea is to let the mixture cool for 10 or so minutes until it reaches 225-250 degrees. 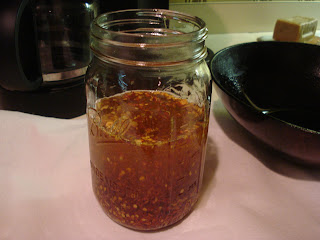 From there, I removed the ginger and poured the wok full of oil into the waiting jar of chilies.

With a good stir or two, I ended up with this glorious jar. 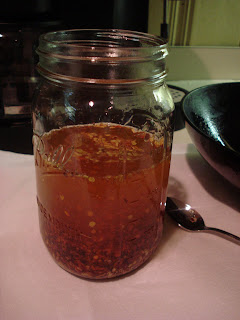 Dunlop writes that you can use this oil almost immediately, but I decided to let it sit in the pantry for a few days in order to fully mature. Hopefully, I’ll soon try a recipe that showcases my freshly made chili oil.