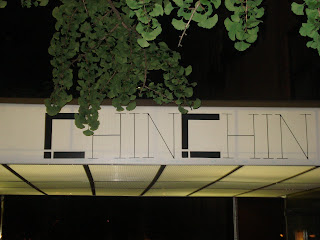 My last night in New York, and I decided the best thing to do was to see a show. After buying my tickets, I knew it would be late, so I was scrambling on open table for a 10:30 reservation. I made one at an Italian place, but I remember my family and I would always go to Ollie’s Noodle Shop after a show at least once. Unfortunately, the kitchen at Ollie’s closed at 10:30, but I was still in the mood for Chinese. So turning to yelp, I eventually settled on reservation at Chin Chin.

After a great performance of South Pacific, I found a taxi and made it to East 49th street. Walking in the door, I was pleased to see that Chin Chin is a semi-upscale take on the classic Chinese restaurant. What was even nicer was to see an enthusiastic and friendly Jimmy Chin playing the role of maitre d’.

Once I was seated, I was given two sorts of amuse bouche. 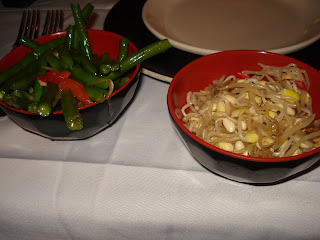 The soy bean sprouts were dense, much denser than the usual mung bean sprouts, but they were delicately flavored and tasty. The grean beans were just as good with a soy based sauce and great lingering heat.

With a few recommendations from the waiter, I had my order in. In no time at all, my appetizer was on the way to the table. 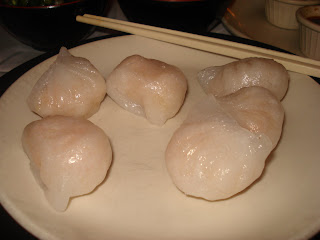 Labeled as steamed shrimp dumplings, I called over the waiter and asked him if these were just the har gao from their dim sum menu. He quickly nodded and retreated to the background. Dim sum or no, I love har gao, and these were a pretty fine specimen. The wrapper was thicker than I have come to expect from har gao, but the shrimp inside had a great, fresh snap with each bite. Everything was really tied together with the superb house chili oil dipping sauce. I wish every Chinese restaurant had har gao on the regular menu.

There was one dish that every yelper was raving about, the Grand Marnier shrimp. 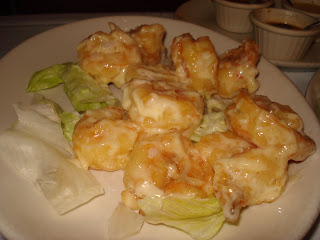 Really just fried shrimp with a sauce, taking a bite revealed them to be much more than that. Not only were the shrimp enormous, they retained a perfectly crunchy and delicious fried exterior. I thought the Grand Marnier sauce would be overpowering, but really it was rich, decadent and entirely addictive. Sure the dish was a little pricey, but I couldn’t stop eating those shrimp.

Almost as an afterthought, I had ordered another yelper favorite to go along with the Grand Marnier shrimp. 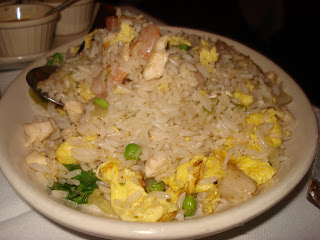 The waiter had also recommended the 10 ingredient fried rice. As soon as it was brought out, I took a bite and realized this was just a house everything fried rice. The subsequent bites revealed just how simple this dish was, and I realized I’ve made much better fried rice. I decided to make it into a little game, and I tried to name all 10 ingredients. I was sure about the rice, eggs, peas, cabbage, green onions, shrimp, bbq pork, soy sauce, and chicken. The last ingredient eluding me, but my best guess is white pepper.

I soon had my fill of Grand Marnier shrimp and fried rice, so I had it packed to go and paid my bill. I’ll admit that around 12:30, after doing some packing, I ate the rest of the rice and the shrimp. Sitting in my room, with an empty takeout box, I was pleased with my choice of dinner. Sure, Chin Chin is nowhere near the best Chinese food I’ve ever enjoyed, but it was a pleasant end to a great visit to New York.