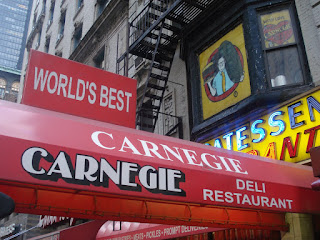 The Carnegie Deli, I know it’s overrated. I know it’s a tourist trap right off Times Square, but I wanted to try it, just so I could say that I tried it.

Being by myself, I was seated at a table of strangers, which isn’t always a bad thing. In this case, I had a nice conversation with a man from Durango. However, the constant questions about “why are you taking pictures” from the couple next to me got really old, really fast.

As soon as your seated, the waiter brings you a bowl of half sour pickles. 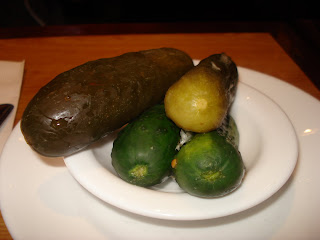 I’m a big fan of half-sours. You just can’t find them in Jackson, and the Carnegie Deli has a pretty good pickle.

Playing the role of the uber tourist, I ordered an egg cream. 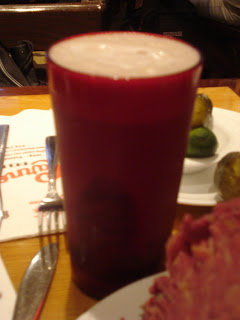 I thought this was a pretty fair offering, but I realized that I’ve had so few egg creams that I don’t know the good from the bad. Regardless of my experience, I enjoyed the rich chocolate flavor of the Carnegie egg cream.

Outside of the mention during the original Chanukah song, if you ask anyone about the Carnegie Deli, the first thing they talk about is the huge sandwiches. 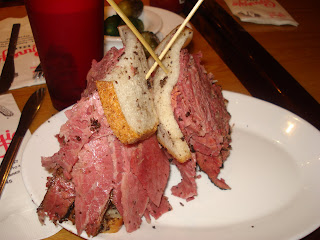 Pictured is the popular “Woody Allen”, a literal mountain of corned beef and pastrami on rye. Sure it seems like a lot of meat, but for $18, I expect something close to a full brisket on my plate.

Trying to take a bite of the sandwich is a fool’s errand. 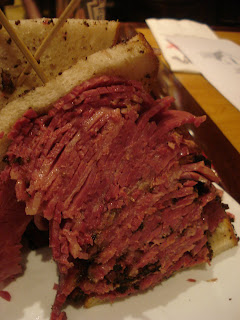 There’s no way to get your mouth around that sandwich and the toothpick is there purely for decoration. However, once I tasted the pastrami, I was thrown off by it’s odd texture. Sure it was nice and fatty, but it had an odd bite. Moving to the corned beef, that texture only worsened, the corned beef actually tasted slimy.

Unimpressed and without a fridge, I left the majority of my sandwich at the table. I really couldn’t see the attraction of the Carnegie Deli. Not only were both cuts of brisket oddly textured, the sandwich didn’t even come with mustard. Walking out, I realized I could have taken my 18 dollars, caught a cab to Houston Street, gotten a pastrami on rye from Katz and maybe have a little change. Thankfully, I can say that I’ve been to the Carnegie Deli and I have never to return.