For many Jacksonians, Brent’s Drugstore has a special place in their memory. I know I can remember going there with my grandparents and enjoying one of their griddle cooked burgers with chips, not fries. However, like many things in my childhood, Brent’s had faded into the background. Only recently with the sale of the pharmaceuticals to CVS, and the Calvert’s selling the actual location, has Brent’s moved back to the forefront.

Saturday, I decided to pay a visit to the Jackson institution and I was accompanied by Alvin and Kate. Things have definitely changed in the years since I was last in the place. The aisles of knick knacks and drug store items are gone, replaced by tables and booths. It’s a large change from the half dozen booths and counter stools that were there originally. The real question is, how has the food changed?

Despite having two waitress, it seemed that the single cook, Jarvis, was running the show. In between mixing milkshakes and cooking on the griddle, Jarvis had the chance to come and take our order. Ordering at Brent’s is unique in that it’s like a sushi menu. You check off what you want from a piece of paper and hand it to your server. I went for the tried and true Brent’s cheese burger with the extra 75 cent bacon. 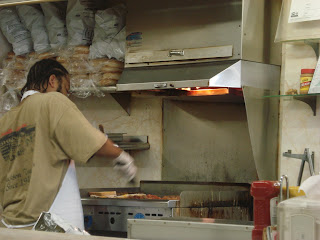 It’s nice to see that the venerable griddle is still seeing duty. Pictured is the aforementioned Jarvis, and he’s hard at work.

While we were waiting and talking about the large number of kitsch items on the wall, it was nice to see the new owner, Brad Reeves, patrolling the floor. He even stopped at our booth for a quick chat, and told us about his plans for Brent’s. Reeves claimed that Brent’s will start serving breakfast and that the pharmacists counter in the back would be converted into another kitchen. I was a little worried that Brent’s would lose its soda fountain charm with two kitchens, but the promise of faster food won me over.

After a sizeable wait, our orders were delivered to the table. 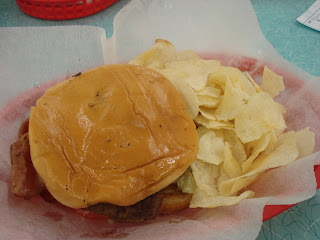 You can tell there’s a fair amount of grease with this burger, and that’s the way it should be. 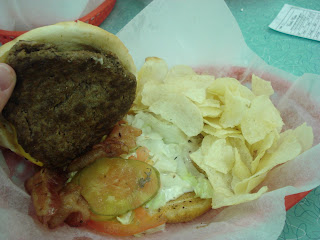 Surprising there’s also a large amount of mayo and lettuce. Moving on, I noticed that by itself, the patty is nothing spectacular, but with all the fixings, it makes for a solid burger. As glad as I am to see that the burgers are still up to standard, I’m ecstatic to see that Brent’s has stuck with the side of chips and not gone with fries as standard. Some things are not meant to change.

Looking for the full soda fountain experience, we all ordered milk shakes. Unfortunately we were soon remembering our wait for burgers fondly as the milk shakes seemed destined to never arrive. We sat there dumbfounded as the waitress seemed to be doing nothing at all while Jarvis was taking orders, cooking, and making the milk shakes. I’m hoping this is something that Reeves remedies soon. 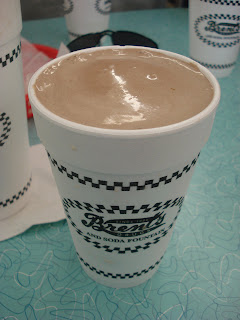 Good things come to those that wait, and good Lord these were good milk shakes. It was thick, rich, and most importantly, extremely chocolaty. In fact, the sheer deliciousness of the milkshakes almost made it worth the wait.

It’s been nearly 10 years since I last visited Brent’s and things have certainly changed. However, most of these changes seem to be for the good. It’s a shame to see the Calverts no longer in charge, but the new owner, Reeves, seems to have high hopes for the place. He has the idea of retaining the original charm and feel but with a few new touches. It’s a daunting task to modify a classic, but I wish him the best. I’m excited to come back and see what new changes have occurred by next visit.

I love Brents! We need to go some time.