After my first foray into the world of “The Best Thing I Ever Ate”, I had come away disappointed with the Michael Simon and his choice of the Oklahoma beef rib at Daisy May’s. However, I was still upbeat and I decided to try to another “Best Thing” from New York. Bobby Flay said the best French fries he ever ate were at Balthazar in the Soho neighborhood of New York. Needing somewhere to eat on Tuesday, I made a reservation on open table and caught a cab to Soho.

Walking in, I was impressed with the classic French bistro style. Also, the place was packed and was full of that noise and energy that a popular restaurant always has. After being shown to my seat, I knew I had to try the chicken liver & foie gras mousse, but I couldn’t decide which vehicle I wanted for the fries.

Fries aside, I soon had my mousse appetizer brought to the table. 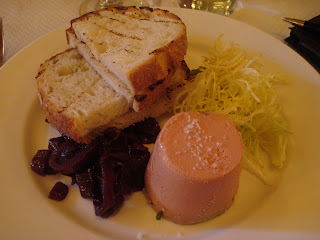 I was already a fan of the presentation. I realize that foie gras & mousse usually aren’t described as simple, but I was a big fan of the simple presentation of this dish. It had all I needed: the mousse, caramelized onions, and plenty of bread. I was a little surprised at the abnormally pink color of the mousse. 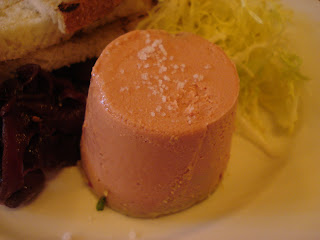 However, taking my first bite of the mousse, it had the familiar irony and decadent taste that I’ve come to enjoy about foie gras. Once I put a piece of the onion with the mousse on a slice of bread, I found the perfect combination. The onions cut through some of the harsher flavors of the mousse and made everything that much better. A course, the only other problem is the amount of mousse. That’s a massive amount of mousse for 12 bucks and more than enough for one person. I soon ran out of bread and room for mousse.

Ultimately, I decided on the steak frites. Of course, seeing the lady next to me get her order of moules frites, I immediately regretted the decision. 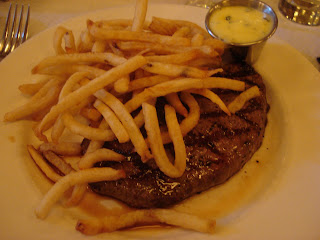 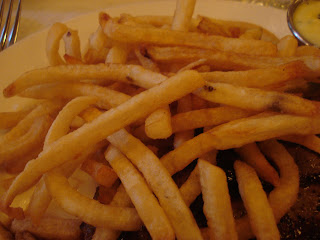 Wasting no time, I immediately sampled a fry. They were crisp, delicately seasoned, but in desperate need of salt. By themselves, the fries aren’t bad, but nowhere near the best fries I have ever eaten. That’s strike two to the food network. Of course this was a Bobby Flay’s recommendation, and I’m sure these fries are fantastic when they come with an overwhelming supply of smug self-satisfaction. 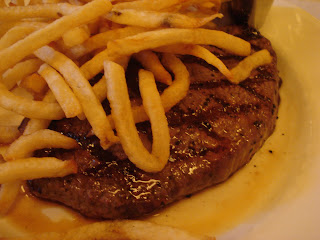 Anywho, I moved on to the steak, and after taking a bite, I knew I should have gone for the mussels. This steak was overcooked and lacked any flavor; it didn’t even taste like beef. Sure, my taste buds might have been jaded from Luger’s the night before, but this tasted like a steak I would get at the Western Sizzler of the Golden Corral. 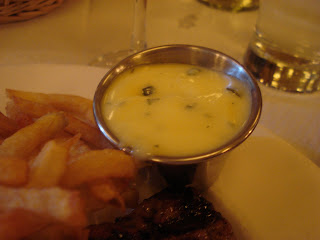 I soon flagged down the waitress for my bill, and she was concerned at how much food I left on my plate. 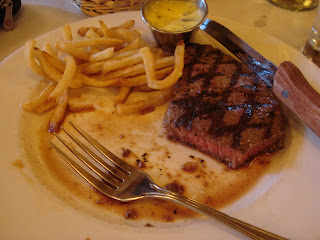 Not wanting to make a scene, I assured her it was fine. Unfortunately, that was pretty far from the truth. As I paid the bill, I realized that I probably would have been better with just the mousse and an order of fries, but the mussels should have been my entrée of choice. It’s really a moot point, there are too many restaurants in New York for take the time to come back to Balthazar. Also, I’m seriously wondering what the stars at Food Network are thinking.

Dude, you make me laugh and Bobby Flay cry....classic!

I do believe the "Cynical Cook" is a "Cynical FREAK"

-Thanks for airing your beliefs. What struck a nerve?

I really like eating this meal is so wonderful to have this amazing plate, I am so charmed to have in my table, just to enjoy it at all. Buy Viagra Viagra