As soon as you walk into the restaurant, you can’t help but notice the Peavey sound stage. I’m not sure if Peavey sponsors the Auditorium or if the restaurant spent a ton of money, but they seem to have the whole Peavey catalogue on one state.

While I was admiring the stage, my friendly waiter stopped by and took my order. In no time at all, the first appetizer arrived. 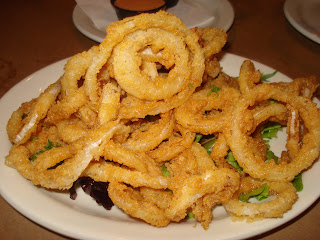 I’m always interested to see how each restaurant approaches the simple onion ring, and the Auditorium had gone for the extra small, extra crispy approach. While I enjoyed the crunch, I kept searching any real onion taste. Eventually, I did find a larger ring that had enough flavor to overcome the dominating batter. In addition to the standard Heinz ketchup, the onion rings came with a two small bowls of comeback and ranch. The comeback really complimented the onion rings, while the ranch was too vinegary to enjoy. Oddly enough, the best way to eat these onion rings is with plain ketchup. Score one for Pittsburgh. 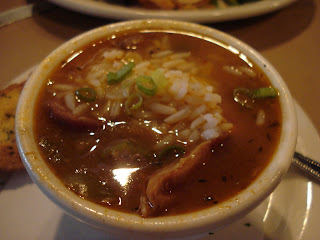 Even though I liked the presentation, I was worried about how watery the gumbo looked. 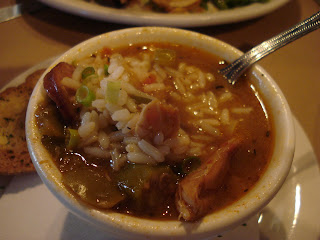 Fortunately, the Auditorium hadn’t skimped on the proteins. Diving in headfirst, there was a pleasant bit of cayenne kick, but the gumbo was lacking. I realized that this gumbo lacked the depth of a labor intensive dark roux. It’s a shame, the gumbo had good potential.

Luckily, there were soon plenty of entrees to divert my attention. 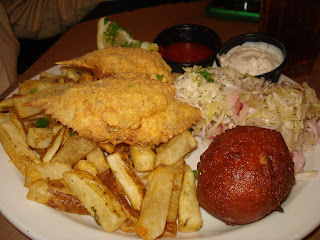 First up was the stuffed crab platter with diced fries, hushpuppies, and coleslaw. It’s great to see that the Auditorium doesn’t skimp on stuffing. The stuffed crabs were completely full of big, lump crabmeat. In fact they were nearly overflowing. Unfortunately, someone in the kitchen had been overzealous with the lemons as every bite was overpoweringly tart.

When the menu read smoked chicken breast, I was expecting a paltry boneless, skinless piece of meat that was dry and overcooked. 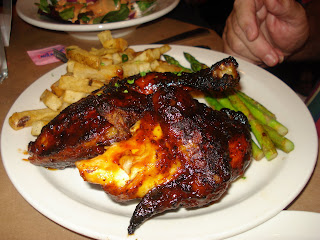 The kitchen at the Auditorium had something else in mind. Essentially a half chicken that had been smoked with a combination of hickory and pecan, this was a well flavored fowl. Each bite was deliciously moist, coated with a great bbq sauce and not at all overpowered by the smoke. Hoping for the same magic with the fries, I was disappointed to find the diced fries to be too salty, even for French fries.

Even with the crab and chicken, there was room for a southern favorite. 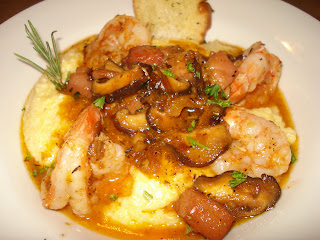 The Auditorium’s shrimp and grits feature their “signature bbq shrimp” served on smoked gouda grits. No matter how you slice it, that’s a lot going on. Hoping to get a taste of each component, I tried the cheese grits first. Alone, the grits are bland and lacking any real cheesy taste, but with the sauce in the middle of the bowl, they are absolutely dynamite. Moving to the shrimp, I was delighted to find them well cooked, but to be honest, the best part of the dish was the ham, mushrooms and the sauce. Literally swimming with well seasoned butter, I knew there were few if any healthy aspects to this dish, but all together it was superb.

While wrapping up the meal, I was able to recount the various parts of my meal at The Auditorium. Sure there had been some marvelous high points such as the shrimp & grits and the smoked chicken, but there had been some real lows as well. The Auditorium has some real potential, but there are some definite kinks in their system. Luckily, the amicable wait staff eased any pains, but I still have mixed feelings. Maybe a second visit would give me a more definite footing, but that will have to wait.