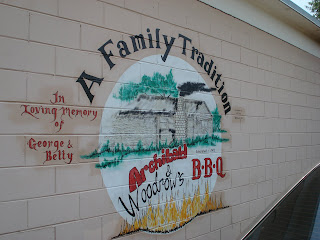 I’m on that all too familiar stretch of interstate between Jackson and Atlanta, and wouldn’t you know it, it’s time for lunch. Tuscaloosa is my goal for both food and fuel fill up, but I need something besides the lackluster Dreamland or fast food that’s right off the interstate. With a quick search on chowhound, I keep seeing the name Archibald’s bbq. Hoping for something better than bland dreamland ribs, I pull off on exit 71 and begin searching for Archibald’s off McFarland. 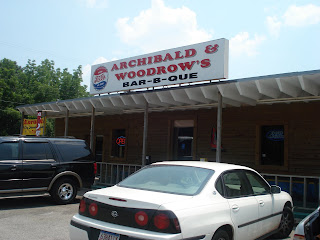 But I like a bbq joint with a simple approach. Besides, the smell of delicious wood smoke hits you as soon as you pull into the parking lot, always a good sign.

Inside the simplicity continues, but I’m able to grab a menu and put in my order without a problem. 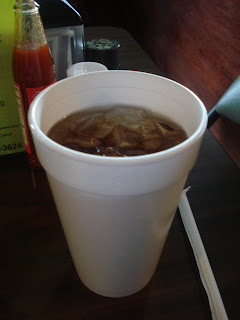 Waiting for my plate gives me time to enjoy Archibald’s excellent and extremely sweet tea, not to mention the rapid refills. Also, like any self respecting college town restaurant, the walls are full of Bama posters and memorabilia.

Just as I’m getting used to watching soccer on the tv at a southern bbq restaurant, my dinner plate arrives. 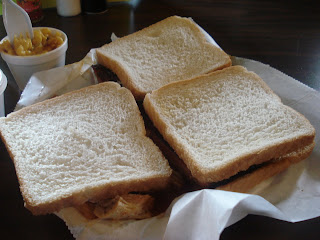 I quickly forget the Confederation Cup and take a look at what I’ve ordered. I don’t know why places in Tuscaloosa give you so much white bread. 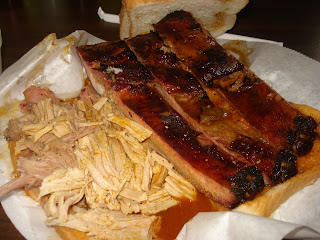 Taking the lid off, I can really get a look at what’s on my plate. That’s a fair amount of pork for such a little plate, and I love that the pulled pork is literally swimming in sauce.

Let’s start with the most important player on the plate, the ribs. 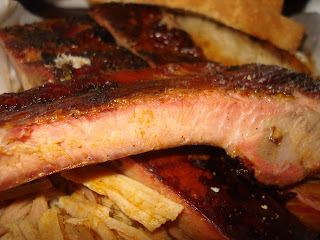 After asking the waitress, I found out that everything is smoked with hickory wood, and I’m pleased to see the signs of a smoke ring on the ribs. 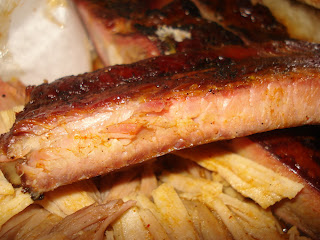 that simple little ring is something that was definitely missing from the Dreamland ribs, and the first bite reveals the flavor is there along with the ring. I notice that the ribs are just a little on the dry side, but they have just enough give for the meat to pull right off the bone but not fall off. Another thing I can’t help but notice is just how tough and chewy the large ends of the ribs are, but the rest of the meat more than makes up.

After demolishing the ribs, I moved onto the pulled pork. 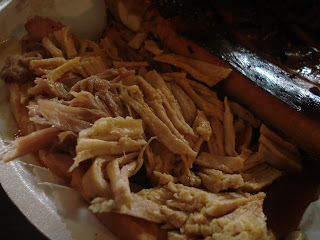 The first thing I noticed is that this is actually chopped pork, not pulled pork. Digging in, I noticed that pork is a little dry, even with its own swimming pool of bbq sauce. One highpoint I did find were the crunchy ends that were buried amongst the rest. Combined with that bbq sauce, the crunch was spectacular. 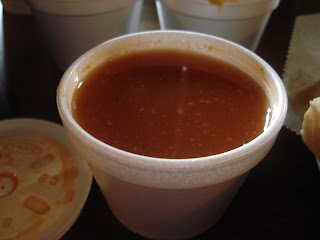 Speaking of the sauce, I was actually pretty pleased with it. It seemed to be a nice mix of sweet, spicy, and just a touch of vinegar.

With my dinner plate, I had a choice of two sides. I decided to stick to the basics, one carb heavy and a green veggie. 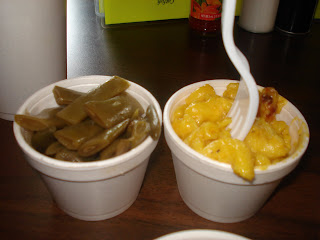 First going for the mac & cheese, I could definitely tell this was made with processed cheese. However, it was nice, hot, and filling. I’d say it tasted like a high quality easy mac. The green beans were something entirely different. I was amazed at how much pepper was used on them, and because of the pepper, I’d say the green beans aren’t bad. They weren’t worth writing home about, that’s for sure.

When all is said and done, I had come to Archibald & Woodrow’s for one reason: to see if it was better than Dreamland. On that level, I’d say that A & W’s succeeded, their ribs had a definitive smoke ring and flavor, and I wanted to finish all the ribs, unlike my experience at Dreamland. However, beating your cross town rival doesn’t make you king. Neither Archibald & Woodrow’s nor Dreamland has me chomping at the bit to come back. I’ll have to continue my search for better Tuscaloosa dining options.

Hey there, I sugesst you try the ribs and Mike and Eds. Both the rips and the pulled pork at Full Moon are pretty tasty too.

I concur about Archibald and Woodrow's. Way better than the extremely over-rated Dreamland. But still nothing compared to the best or even run of the mill 'q' i'm accustomed to in kansas city. and i know it's a kc peculiarity, but i miss fries with my bbq. a and w is versatile, though, I thought their catfish was really good, probably a notch better than the ribs.

Please try the original Archibald's in Northport, off mlk. Its better than archibald and woodrows.