After a mediocre lunch in , I made it to , and my sister and I immediately began brainstorming about a place for dinner. Quite conveniently, I remembered an article I saw on Blissful Glutton about a cheap, Chinese place called Wan Lai. Soon enough, Jennifer, Aaron and I were on our way to for a visit to Wan Lai.

Once inside, I couldn’t help but notice how empty the restaurant seemed, but I suppose it was after 8 pm on a Monday night, not exactly prime dining time. We were quickly shown to a table for four and started pouring over the menu.

With a few ideas from yelpers and the recommendations of the owner, we had our order in. In no time at all, the first dish arrived: three wonton soup. 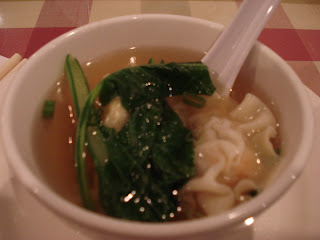 It might be hard to see in that picture, but there are three separate types of wontons in that little bowl, not to mention a crispy piece of bok choy. The soup arrived in a large bowl, but the waiter meticulously divided the broth into three bowls, taking care that each one of us got one of the three dumplings.

As soon as I downed a spoonful of the wonton soup, I knew that Wan Lai had been a good choice. Unfortunately, I couldn’t get a second spoonful until we moved tables. In a both embarrassing & fun twist, our waiter made us move to a bigger table, simply because we had ordered too much food. Immediately after the move, our appetizer arrived. 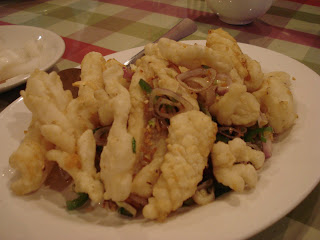 I believe this dish was one of the owner’s recommendations, and it was a winner. Light and delicate, with just a slight taste of salt and pepper, these pieces of squid were deliciously creamy. I’m always prepared to get rubbery squid, but at Wan Lai, the squid are excellent and are further complimented by the extra spicy house chili sauce.

The next dish to arrive was one of the yelper’s favorite, the beef chow fun. 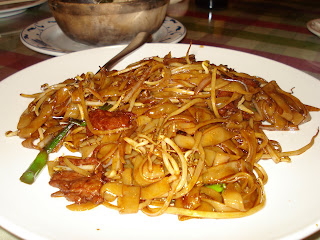 Usually chow fun dishes are a big helping of greasy noodles, and while the beef chow fun at Wan Lai was a little oily, it more than made up for that transgression. The noodles were fresh and nicely contrasted by the crisp bean sprouts. I’ve also never had such tender beef in a noodle dish. Everything was nicely wrapped together with a great soy sauce flavor. In fact, I enjoyed this dish so much; I took an order home with me to . 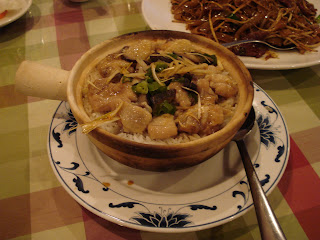 Our waiter had said this would take ½ hour to be ready, but it magically appeared at our table in little more than 10 minutes. After the first bite I was hooked. The chicken was tender and well flavored, and I really enjoyed the sporadic chunks of ginger. I suppose my only real complaint is having to eat around the chicken bones, but that’s an integral part of Chinese cooking and it adds enormous amounts of flavor.

Unfortunately there was a downside to the meal, namely our last two dishes. First was the pan fried seafood noodles. 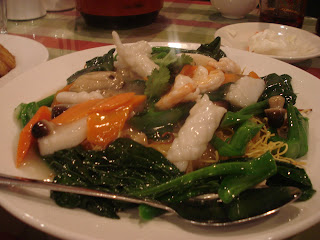 Despite excellently cooked squid and oysters, this seemed to be a very touristy recommendation by the owner. Everything was swimming in a thick, white, starch sauce. This is something I expected off a buffet, and was a complete nosedive from our first three dishes.

Our last entrée was braised duck with assorted vegetables. 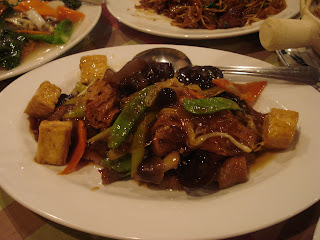 I was really blasé when it came to this dish. We all wanted to try a duck dish, but Jennifer wouldn’t go along with me and Aaron when it came to trying fried duck tongues or duck intestines, so we settled with the most benign duck dish. What you see with this dish is what you get. The duck is all right, and while the vegetables and tofu are big, they really are mediocre.

As a surprise dessert, the owner and waiter brought out three order of red bean tapioca. 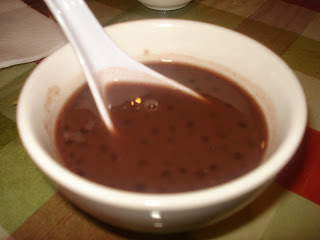 I had heard of red bean before, most notably from the hilarious site: “stuff Korean moms like”

but I had never had anything with red bean in it. The first taste was very odd, and musty. I decided it tasted like pureed black eyed peas with little droplets of tapioca. In other words, this is a dessert I’ll skip next time.

One of my favorite things about Wan Lai is the name. From what I’ve read, it roughly translates to “fat boy store”, and you can’t help but laugh at that name. Also, with a name like that it’s no wonder that some of the food is so delicious, particularly the wonton soup, beef chow fun, and chicken rice casserole. I’ll admit that I was disappointed that the owner recommended two extremely pedestrian dishes with the seafood noodles and duck with vegetables, but I’ll let the transgression slide. I’m definitely paying Wan Lai a second visit the next time I’m in .