Trying to Learn from the Best - Mrs. Yuan's Chinese Cuisine

After I got back from , I got a phone call from , and it was great news. In honor of his birthday, his mom was cooking a small feast. For those unaware, Mrs. Yuan is a master of Chinese cuisine, and her springrolls have been known to cause fights amongst my family members.

Naturally, I was excited about the meal and it seemed like Sunday evening couldn’t come fast enough. Eventually Sunday crawled to 5:30 and I set off for the Yuan’s house.

Once inside, I was hit with the trademark smells of Chinese food; not the salty dreck you get from a buffet, but Chinese food prepared at home by a skilled hand. 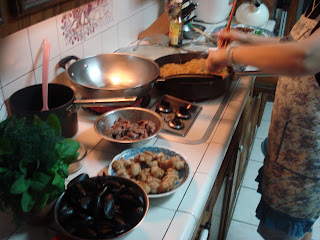 The expert hands of Mrs. Yuan at work.

Minutes later, we all gathered in the dining room. The first dish on the table was a platter of noodles. 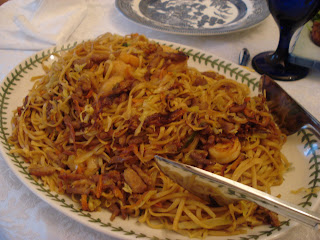 Mrs. Yuan told me that noodles are traditional birthday dish, but no one was quite sure why. All origins aside, these were delicious soy sauce noodles with plenty of beef and shrimp. 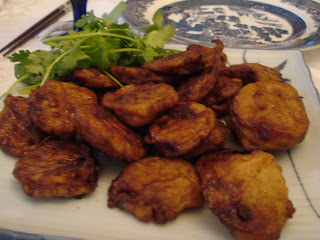 As best I can tell, each one of these medallions consists two slices of lotus root sandwiching a spoonful of pork filling. The medallions are then battered and pan fried, and then quickly cooked in a vinegar sauce. On their own, lotus roots don’t have much flavor, but in this instance, you can’t eat just one.

Our next dish was the sole vegetarian option. 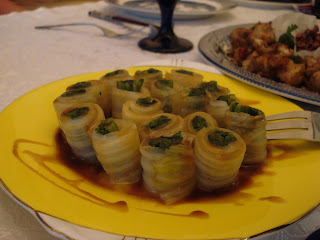 Pieces of cabbage wrapped around greens are a tasty alternative to the other meat filled dishes, but they are damn hard to handle with chopsticks. I eventually broke down and used a fork….I feel so ashamed.

Every time I have dinner at the Yuan’s, Mrs. Yuan has a new dish, and this meal was no exception. 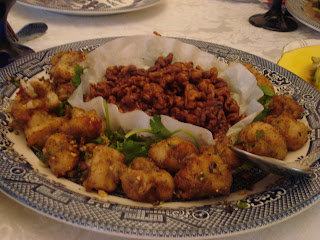 I haven’t had very many frog legs in Chinese restaurants, but if they taste anything like these, I’ll have to ask for them every time. Every one of these leg joints was deliciously moist and very well seasoned, and the candied walnuts in the center were a great contrast to the light and flakey frog meat.

I’m always a fan of mussels, and Mrs. Yuan’s mussels stir fried with black beans reconfirmed my faith in the bivalve. 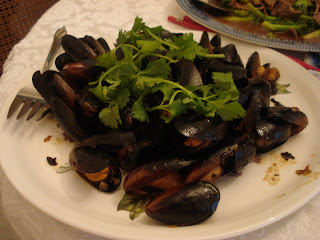 My only problem with Chinese style mussels is how does one eat them? I decided the best way was the hold the mussel with one hand and extract the meat with my chopsticks. Maybe it’s the correct way, maybe it isn’t, but it worked fine for me.

Mrs. Yuan had a second new dish for the night. 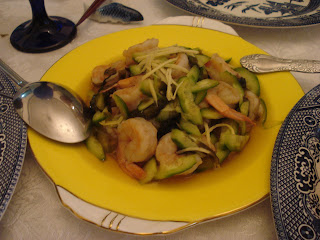 I never really got the name of this dish, I just heard was called Japanese shrimp. I have no idea what actually makes this Japanese, but it was tasty nonetheless.

Last and poorly photographed was the beef and broccoli. 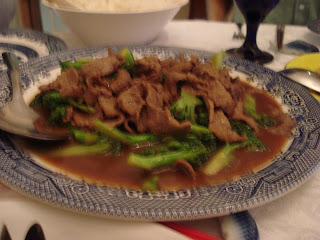 I wish I had taken a better picture of this dish, just to show Chinese restaurants how beef and broccoli should be prepared. I realize that this is an odd addition to a menu of authentic Chinese dishes, but this was perfectly done and always a hit.

Of course it wouldn’t be a birthday without a picture of the birthday boy and his birthday cake. 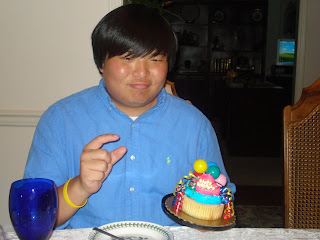 might have been complaining about the size of his cake, but there was no room to complain about the meal his mother prepared. As always there was too much to eat, and I went home a little miserable from eating too much, but I can live with this sort of misery.