After our start at Cool Al’s, it was time for the second stop on our quest for the best bacon cheeseburger in Jackson. Where to go next was a tough choice, but in the end, geography and the suggestive power of advertising made the decision for us.

Having seen their billboard on Old Canton Road for so long and having just begun the burger quest, I knew there wasn’t a better time to try Majestic Burger.

Pulling into strip mall parking lot, the first thing you notice is that Majestic Burger is a popular northeast Jackson lunch spot. As a result, the staff seemed to be curt and less than courteous. After placing my order for two signature majestic burgers, two drinks, and an order of fries, I was shocked to find it totaled over $25. Unfortunately, my biggest shock was yet to come.

10 or so minutes later, a waitress found our table outside and delivered our order. 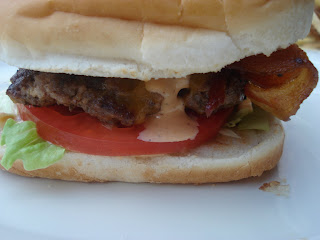 I realize that picture makes for a frumpy looking burger but that is exactly how it appeared, complete with dripping comeback dressing. 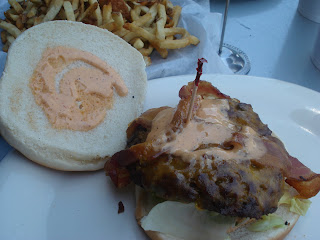 Opening the burger gave me a better look at what I was dealing with. A signature majestic burger is topped with bacon, cheddar cheese, comeback dressing, shredded lettuce and tomato. It took me a second to find the cheddar, but I soon noticed that the cheese had been melted into oblivion.

The first bite brought the terrible truth to the forefront. 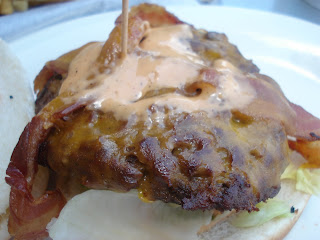 Nothing but black pepper and comeback, every other taste was obscured. Where was the beefy and bacon flavor that every man loves in his bacon cheeseburger? Even the distinct taste of cheddar cheese was nowhere to be found.

Hoping to find redemption amongst the french fries, I was surprised to find a stowaway in the middle of my pile of potatoes. 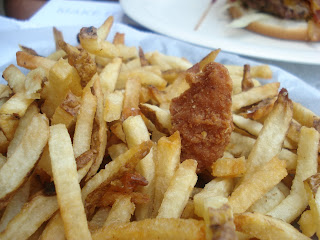 It’s a shame that a shred of flavor wasn’t hidden in this basket of fries. Bland and essentially devoid of any seasoning, there was one saving grace for these fries: at least they were a little crisp.

At the end of our meal, our scores were most telling.

I’ve seen this before, subpar food becomes the darling of the Northeast Jackson crowd. It happened with McAlister’s Deli and various other places across the metro area. Maybe I’m being a bit shortsighted by only judging a single burger from Majestic Burger, but as I’ve stated before, there are few things more sublime than a well made patty, cheese, bacon and bun all working in perfect harmony. Besides the signature Majestic Burger was the closest thing to a traditional bacon cheeseburger, and if this is the best Majestic Burger can do, they might want to rethink their name.

For a second look at Majestic Burger, please click here

The best advice I could give you on your absurd review on Majestic Burger is that you have to be a complete idiot to slam one of the best restaurants that has come to Jackson in a long long time and you should retry that food for your "epic" burger you are claiming for. However you seem to slam a lot of the finer restaurants in Jackson so maybe that is just part of your disposition.

What the hell dude, I'm so not hungry after hearing anything you write on your food blog,,,, First, I stopped into Majestic Burger by chance on a Friday night and not only were the servers the most fun ever,, but they would not leave me alone, ok,,,, Second,,, I had my whole family plus a friend from out of town and she absolutely love the music and engery. So let's get to the 3rd and most important part.... Majestic Burger has a kick(...)menu .... and you need to go back when you are hungry and not so pissed off at north jackson my dude! I think you should go back with a empty belly and get out of your car and go in vs. a damn drive in.... aka wendy, burger king, whataburger, .... ps. will be looking for you like a fly on the wall.. by the way I'll be the one eating the healthy delicious salad topped with blackened redfish. pass me the comeback dude!!!

Okay first of all, I have no idea is this is some kind of popular blogsite or not and the ONLY reason I ran upon it is looking up the number of Majestic Burger to call in an order. After placing my weekly favorite, I stumbled across your blog and I only have to ask "are you out of your mind?" You can not even begin to appreciate how and where this whole concept of a gourmet burger began and how it has come to reality. The best thing you can do is START over and join the rest of the statisfied customers of this place and from what I read previously it is not anywhere close to the confines of Northeast Jackson!!

I'm just amused by the phrase "by the way I'll be the one eating the healthy delicious salad topped with blackened redfish. pass me the comeback dude!!!"

- so you are arguing about someone's opinion of a burger - but are claiming that if one finds you there, you won't even be eating one. Then I don't recall the author of the blog mentioning any drive-throughs in his burger quest - pretty sure the aforementioned chains haven't been included in this "quest." And unless this is comeback in a form unlike any I've ever seen, I don't know of anyone that would use the word "healthy" to describe it.

ps - should have been in Atlanta this weekend. Aaron made burgers - half beef/half bison with fantastic blackened cheddar that we picked up at the Farmer's Market. Oh - and we finally tried the Wagyu hot dogs - good gracious - tell Paul Anthony to stock up!

Thanks for this review... my husband and I have an errand to run in Jackson, and were looking for a place to have lunch while we're there. We won't be stopping at Majestic Burger. I can't believe their presentation!

After visiting a few spots in Jackson I tend to agree with you that mediocre food is the standard there. So sad! Maybe we'll just run our errand and come back to Meridian for some delicious food (and I thought our restaurant choices were limited here! Jackson is way worse).