After the great success of Abacus the night before, I did a quick search for some Texas favorites: Mexican food and Barbeque. Unfortunately, my search revealed that the best barbeque is found outside of Dallas and there doesn’t seem to be a clear favorite for Mexican. Lacking an answer, I turned to yelp to see what sort of dim sum Dallas had to offer. One name that kept turning up with very positive reviews was Hong Kong Royal, so I loaded the address into my Garmin and hit the highway.

Situated in the middle of a strip mall, Hong Kong Royal had windows full of Chinese characters and advertisements for all day dim sum. I’ve had mixed experiences with places that serve all day dim sum, but nothing ventured, nothing gained.

As soon as I got inside, I was surprised to see how empty the restaurant was. I know that 10:30 is early, but I figured that more than one table would be occupied. Regardless, I was shown to a table and a steamer cart was soon rolling my way. 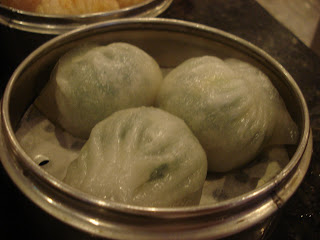 Next off the cart was an order of the old favorite, pork shui mai. 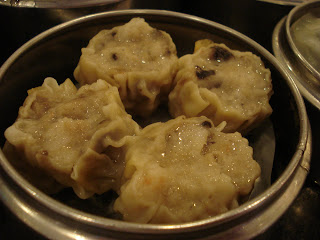 These were greasy little dumplings, and lacked the full porky flavor that I had come to expect from Texas dim sum. The absence of a bold pork flavor meant that the chili sauce quickly dominated everything about this dumpling. On a side note, Hong Kong Royal provides an excellent chili sauce, one of the spiciest I’ve had.

The next dish was another pork favorite, the pork spare ribs. 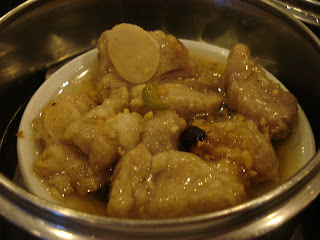 Despite swimming in liquid, these pork ribs were surprisingly lean and dry. They did have a nice level of jalapeno heat, but I couldn’t get past how dry they were.

Timid eaters beware, the chicken feet were next. 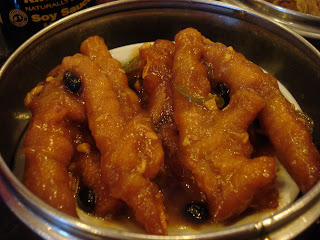 Time for the dim sum litmus test, the har gao 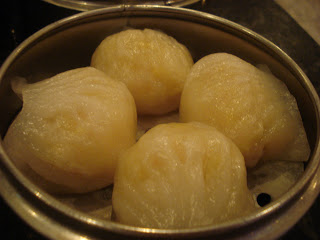 While these har gao lacked the usual perfectly translucent wrapper, they were full of shrimp and bursting with flavor. It probably helped that these were fresh from the kitchen. The bold shrimp flavor was a perfect match for the potent chili sauce.

One of my new favorites came up next, the stuffed bean curd. 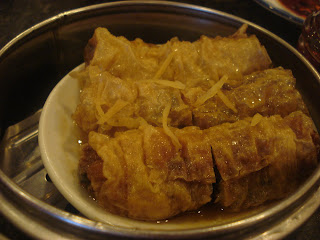 Nicely flavored with pork and shrimp, I was a little disappointed in the amount of stuffing. Usually bean curd wrappers are stuffed to the gills and are cumbersome to eat. Sure this particular example was a little easier to eat, but I prefer the challenge of a fully loaded bean curd wrapper.

The shrimp and mushrooms was just an odd dish. 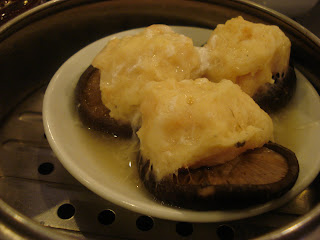 There was a great difference in textures here. The shrimp practically melted in your mouth while the reconstituted mushroom was overly chewy.

Obviously, we were missing our quota of shrimp for a dim sum meal, so I remedied that with an order of the fried shrimp balls. 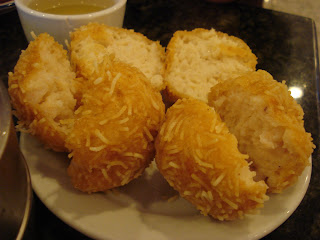 The use of cellophane noodles instead of strips of wonton wrapper made this a much neater dish. Also, the shrimp stuffing was delicious and perfect for picking up extra bits of chili sauce.

I had no memory of ordering this dish, and I called it the mystery dumpling. 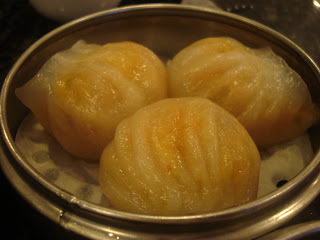 A quick query to the waitress remedied that situation as I found out these were called seafood dumplings. I thought it tasted like a spicy dynamite sushi roll that had been put in a dumpling and steamed. It was full of shrimp and crab and was generally unpleasant.

Despite having already enjoyed the fried shrimp balls, I felt the need to order us two stuffed crab claws. 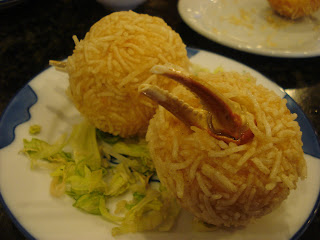 I was still amazed at the use of the cellophane noodles and the odd batter that Hong Kong Royal used. As soon as you took a bite of the crab claw, the entire fried shell seemed to pull away. Still, these were hot and delicious, mainly because they were made to order.

Even though some of their dim sum dishes had been less than spectacular, I was very pleased with the dim sum at Hong Kong Royal. I was so pleased that I decided to splurge on gifts for people in Jackson. 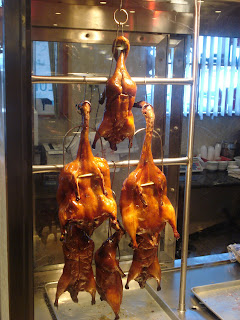 Driving home with three ducks makes for a very odiferous vehicle, thankfully the attentive and helpful staff at Hong Kong Royal made sure to package the ducks well so nothing was spilled. Needless to say the ducks were a great success at home.

I am not nearly as adventurous as you are when I have been to Hong Kong Royal. Thanks for the well written and complete review, I will have to try some of those dishes. I am definitely a fan of the har goa, shrimp and spinach dumplings and seafood dumplings but I will have to venture out next time.
Matt