The first week of our search for Jackson’s best bacon cheeseburger had been less than spectacular. It seemed that, one by one, we were exposing revered Jackson institutions. Wednesday, Sam and I planned to meet for lunch and get the quest back on track. Trying to decide between Char or the Cherokee, I decided we should try the high end and see if we fared any better.

I’ve previously reviewed Char and had been less than impressed; I believe I said “it doesn’t excite the senses”. Regardless, I was ready to give Char another try, but this time sticking to simpler fare.

Right away, I was glad we had agreed to try Char. As much as I love a good greasy spoon, there are few things finer in life than a clean restaurant with dark woods, clean white tablecloths, and an attentive wait staff.

Less than a minute after being seated, we had our order ready. Two orders of the Char burger, dressed with lettuce, beefsteak tomatoes, and red onions on a toasted egg roll. A two dollar extra of Tillamook sharp cheddar and bacon make the char burger exactly what we’re looking for. 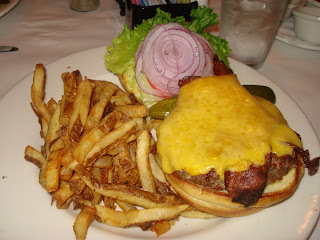 10 or so minutes later, the burger is ready and what a sight for sore eyes. No flimsy turkey bacon or magic disappearing American cheese on this burger. With a real, cultured cheese and honest to goodness slices of apple-wood bacon, this is what a bacon cheeseburger should look like.

The first bite, as always reveals the truth. The cheddar definitely compliments the burger. 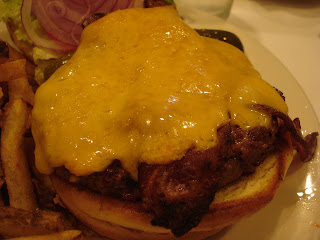 I might even go so far as to say the sharp Tillamook cheddar slightly dominates the burger, but at the end of each bite, the flavorful beef of the patty shines through and shows just how well prepared this burger is.

One thing I can’t emphasize enough is how nice it is to finally taste a quality piece of bacon. This is a well smoked, well flavored piece of pork. Even better than the first bite, I found the ethereal bite for this burger. It comes right in the middle, just where the two strips of bacon intersect. Not only do you enjoy the beefy patty and sharp cheddar, you get a double dose of bacon that just makes everything zing.

Sam and I had to throttle ourselves in for this rating.


While discussing our scores, a few interesting comments came to the forefront; this was the first truly juicy burger we had enjoyed. Also the fries were a very complimentary to the burger. However the biggest shocker was the price. Two bacon cheeseburgers with fries at Char were cheaper than two signature majestic burgers and one fry. Not only was Char cheaper, the service, quality, and overall enjoyment are leagues ahead. It may be too early to pick a favorite in this competition, but the Char burger is making a quite the case for itself.

For my first review of Char, please click here

Well, if the score is no longer 8.12, I am no longer as interested in your scoring rubric.

$13 for a hamburger is obscene