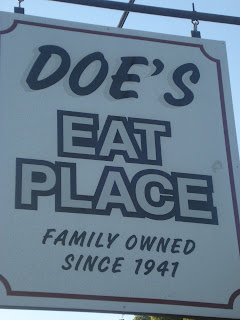 One of the top 10 steakhouses of 2008 by Gayot Guides, one of America’s top restaurants according to Bon Appetit, and a feature in Alton Brown’s “Feasting on Asphalt”; normally these sort of accolades are awarded to a 150 year cornerstone of cuisine in Chicago or New York, but not this time. This time, all of this high and lofty praise is lauded on a tiny restaurant in even tinier Greenville, Mississippi. It’s named Doe’s Eat Place, and on Saturday evening, I found myself passing through the cotton fields of the Mississippi Delta en route to Doe’s and a taste of their world class fare.

When you first pull up to Doe’s, you can tell this is a popular place for a Saturday night. It’s 7 pm and the place is already full to brim. Walking through the front door presents you with an unexpected treat. Instead of a front waiting room with a maitre d stand, you walk right into the middle of the small and sweltering kitchen. 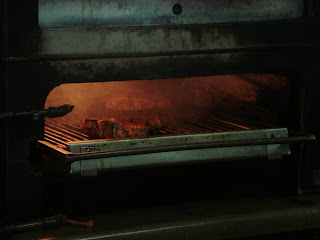 The broiler on full blast might have something to do with all that heat.

Once we were shown to our table in the corner, I was able to get a real feel for the place. It’s obvious this place has been here for years, there’s no way it would pass health code standards as a new restaurant, but that’s part of the charm. 10 or so minutes later, our waitress comes up and asks us for our order. Never having been given a menu, we don’t know what’s available, so the waitress gives us a quick rundown of the menu. They have 1 ½ lb filets, 2 ½ lb porterhouses, 4 lb strip steaks, fried or broiled shrimp, and tamales. We each try a porterhouse and then a half dozen tamales to share.

The first part of the meal is quick to arrive. 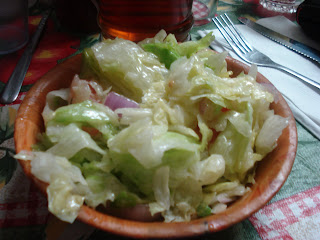 Although Doe’s is known for their cooked dishes, they have a bit of a cult following for their salad. Dressed in a simple, thick lemon & oil dressing, this is a lot of salad for such a small bowl. 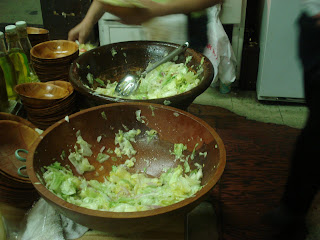 Each salad is hand tossed in these massive wooden bowls. Supposedly the far bowl has been in use since day 1. Regardless of the age, these wooden masterpieces produce thick, oily, and delicious works of art.

Before we can finish the salads, our waitress comes to our table with our half dozen tamales. 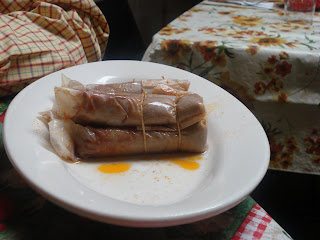 That’s quite a presentation, particularly those little orange puddles of grease. Ain’t life grand? I hurriedly unwrap one of the tamales to get a closer look. 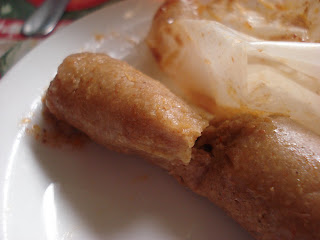 The first bite is extremely telling as it is dense, extremely flavorful and spicy with a slightly lingering heat. Made of all beef, these tamales have an oily nature, something that is reinforced by the parchment paper wrapper. I prefer a corn husk wrapper, but the parchment wrapped, soaking in oily broth tamales at Doe’s have a multitude of virtues.

And now, the main event, it’s time for my porterhouse steak 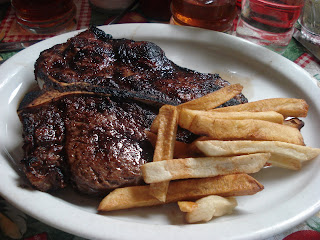 I don’t care where you’re from, that is a sizeable chunk of meat. Served with a small side of cast iron skillet fried French fries, this is what a steakhouse is all about. The first bite reveals it all, 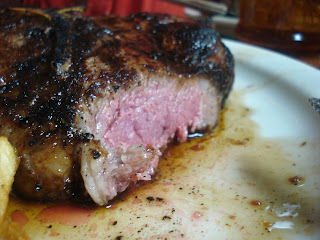 The fatty edges are crispy and hide a moist, slightly pink interior that is dripping with full, beef flavor.

The accompanying French fries are another story. 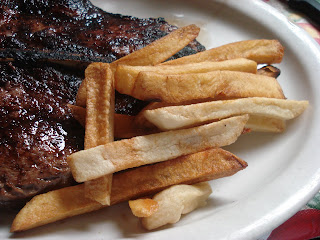 I figured that they would be like everything else at Doe’s, very good if not damn near ethereal. 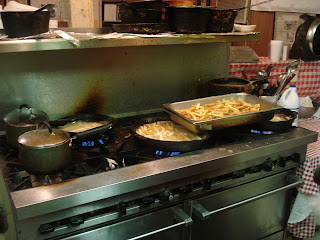 Especially since they are cooked in a proper skillet instead of a deep fryer. However, I soon found out that a little salt on these fries does wonder for the flavor.

Going back to the porterhouse; after attacking the strip side of the steak, I decide to give the filet side a fair shake. The outer section of the filet is a little overcooked, but past that first inch, it’s nothing but buttery smooth and delicious. 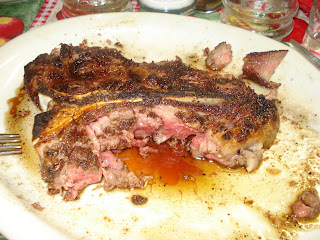 Unfortunately, this just too must to eat at one time. I was flummoxed by a 2 ½ lb porterhouse; I can’t imagine the man who takes on an entire 4 lb strip steak.

After getting all our takeout boxes, we headed to the car. 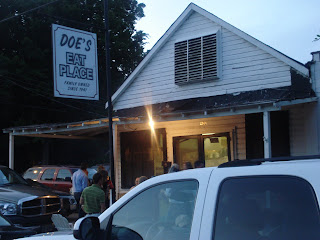 Even though it was nearly 9 at night, Doe’s was just getting started. Everyone here apparently knew the drill as they brought lawn chairs and beer to ease their lengthy wait for a table.

On the way home, I got a chance to reflect on the feast I had just enjoyed. It’s amazing to think that something that delicious can exist in a small town in such a poor state, but it’s achieved cult status. I overheard other tables talk about how people fly to Mississippi just to eat at Doe’s. Amazing isn’t it? Even more amazing is what I brought home. 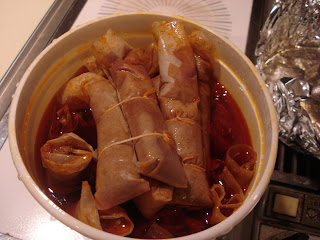 If I’m going to drive 2 + hours through the delta, I’m going to have something to show for it, so why not 3 dozen Doe’s tamales?