Last weekend I was hanging out with my friends Alvin and Kate, when we started talking about hamburgers. It just so happened that we had all heard about hamburgers called Juicy Lucy’s or Juicy Loosey’s, essentially two patties sealed together with a piece of American cheese in the middle. It sounded like something worth trying, so that Saturday evening we got to work.

I had an online recipe to follow but, for the life of me, I can’t find it anywhere on serious eats. 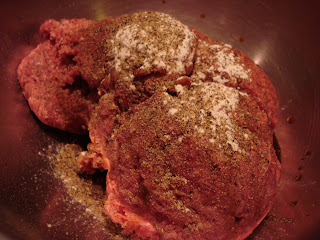 From there, Alvin and I started making the beef into patties. 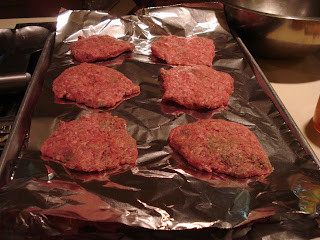 Here was our fatal error. For these burgers to work, we needed an incredibly thin patty, something we didn’t think about.

We decided to try one per the recipe’s instructions. 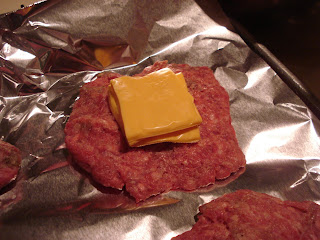 Folding the slice of cheese twice, I put the cheese in the middle of the patty, and then put another one of top. 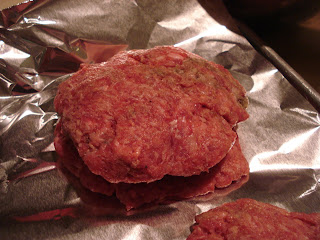 The idea is to seal the patties together, making a single mega-patty, fully of processed cheesy goodness.

Because I find American cheese bland and boring, we decided to make the rest of the burgers a little differently. 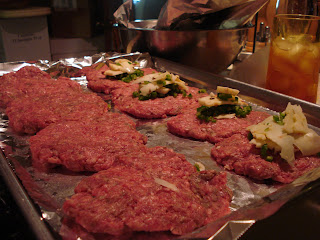 With Kate’s jalapeno handiwork and some thin slices of pepper jack cheese, we soon had the rest of the burgers ready to fold. 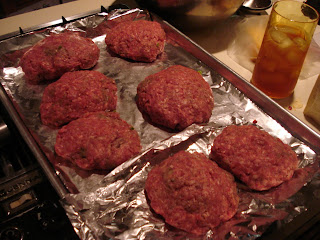 After a few minutes of knitting together patties, we had 8 burgers ready for the grill.

With a nice hot grill surface, I was ready to start cooking the burgers. 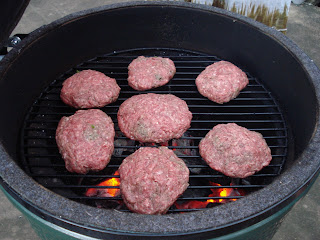 They were looking pretty good so far. 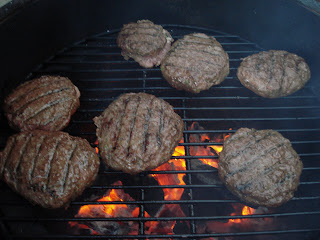 After the first flip, everything was going well. 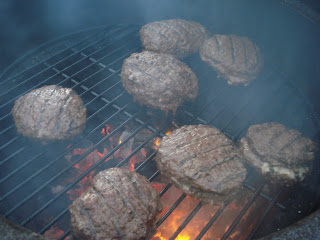 Unfortunately, we soon had evidence of cheese leaking everywhere.

I got the burgers inside. 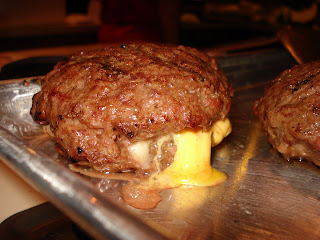 and I have to admit, Kate’s burger, pictured here, looks pretty badass, especially with a river of molten American & pepper jack cheese.

Unfortunately, the first bites revealed the horrible truth. We had made our burgers too thickly and the inside was still quite underdone. 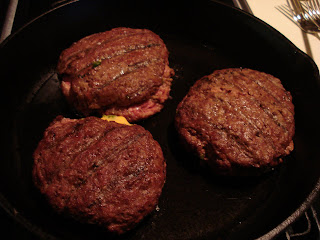 I was tired of being eaten alive by mosquitoes outside, so I decided to finish the burgers off on the stove with a cast iron skillet.

With a few more minutes of cooking under their belt, I decided to try one of the pepper jack & jalapeno burgers 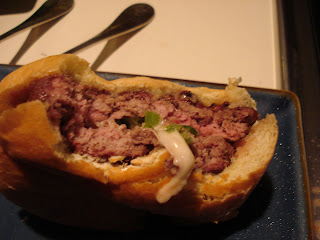 Aside from stringy, unmelted cheese, this burger tasted bland. Even with the jalapenos in the middle, all I tasted was cheese made from pasteurized milk.

Later on, the three of us decided to try out the original recipe burger. 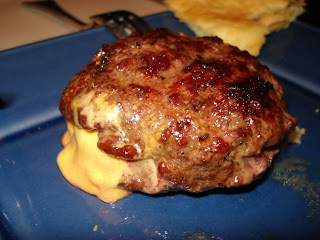 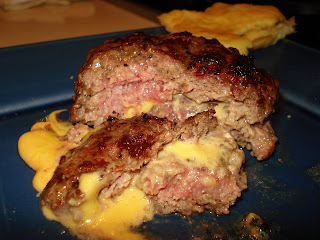 Still, even with the nicely melted cheese, I was completely underwhelmed.

Oddly enough, while we were trying our burgers, we were watching an episode of Diners, Drive-ins, & Dives about the home of Juicy Lucy’s. The owners of the mecca had the cheese stuffed burger down to a science, particularly the thickness of the patties and how to keep the burgers from leaking cheese everywhere. I think I’ll hold off on making anymore cheese stuffed burgers until I can try the original. Now I just have to think if I know anyone in Minneapolis.

well, you don't have any idea how good looks all this presentations, they are really delicious and so tasty that I want a little piece of this right now. Buy Viagra Viagra