Wednesday was the day. Before I left Atlanta, I was finally going to try Au Pied de Cochon in the hotel Intercontinental. After a quick reservation on open table, I made my way down Peachtree, parked with the valet and strolled through the lobby for some fine French fare.

The first thing you notice about Au Pied de Cochon is the faux antique French decor. Everything is meant to mimic Versailles or some other opulent French palace, but with a sense of humor. In addition to the obligatory cherubs, there are a number of flying pigs painted in the heavenly scenes on the walls.

After a quick look at the menu, I knew what my appetizer was going to be: a full dozen escargot. I know that is the definition of excess, but escargot are a rarity in Jackson and how often can you order a dozen at one time? Unfortunately, I couldn’t find the star dish anywhere on the menu. After asking the waiter, he checked with the kitchen and soon returned with the good news: I would have my trotter for lunch.

Soon enough, my plater of escargot made its appearance. 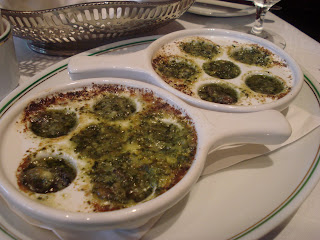 I know that is a staggering amount of butter, garlic, and parsley, and I was loving it. The first bite was a confirmation of just how rich this dish was, and I neared the end, I realized that it was too rich and too much. That’s probably the reason why you can never find more than 6 escargot to an order, it’s just too decadent for that sort of quantity. Regardless, APDC did everything right with this dish, although I did detect a slightly raw bite to the garlic, something I wasn’t expecting.

With so much butter and garlic for my appetizer, surely the trotter would prove too much of an challenge; needless to say, I soldiered on. 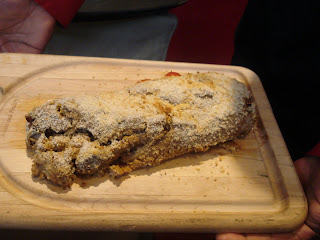 I love the pomp and circumstance of a dish that has table side presentation and preparation, and what a site to behold. 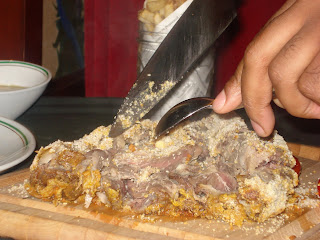 The waiter’s skilled hands soon had every knuckle and bone removed from the trotter, and ready for consumption. 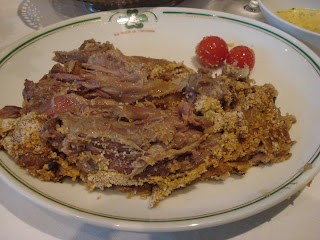 With so much anticipation, I took the first bite and was immediately treated a dark pork that was extremely rich in flavor and utterly fantastic. 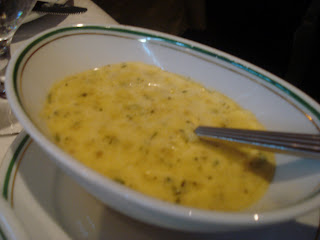 However, things soon got that much better when I decided to use the accompanying bearnaise sauce. What was an excellent piece of pork soon garnered ethereal status.

Sure there was an order of french fries to compliment the trotter. 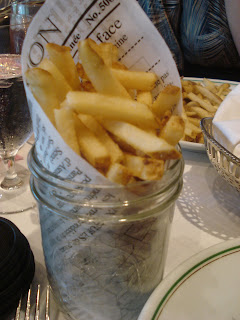 but whatever they brought to the table was overshadowed by the divine combination of trotter and the bearnaise sauce.

Minutes later, I was left with a platter of a few errant knuckles and the skin. After clearing the table, my waiter had the bill ready in seconds, seemingly the definition of prompt service. On the way out, I discovered that Au Pied de Cochon is open 24 hours a day. Imagine, if you will, a world where you can have such indulgences as cassoulet, trotters, and escargot any time of the day or night. That is a world that I want to live in, and I will, without a doubt, be a return visitor to Au Pied de Cochon.