A long time favorite of the Jackson metro, I haven’t been a frequent patron of Amerigo’s in a few years. I suppose Bravo has taken its place as my go to Italian restaurant, but on Friday, I decided to give the old warhorse another try.

While waiting for a table, I couldn’t help but notice a particular award on the wall. Apparently Amerigo won the award for best Italian restaurant in Mississippi during the 2008 Mississippi Magazine reader’s poll. I can’t help but find that a little dubious, as Bravo is always mentioned before Amerigo, but maybe that’s just me. Unfortunately, I had plenty of time to think about this because I was forced to wait for a table despite the 6 or 7 empty tables right in front of me.

Minutes later, I was seated and left with my menu. The first thing that caught my eye was the cheese fritters appetizer. I remember trying these for the first time when I was about 10 years old. They were massive balls of fried cheese with still cold centers. Hoping time had remedied this, I decided to order the cheese fritters. 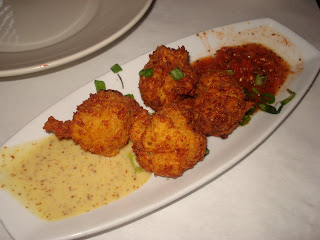 I couldn’t help but notice how much smaller the fritters have gotten over the years. Apparently there has been some change because Amerigo is proud to let you know their fritters have been featured in Bon Appétit. I did a fine job stumping the waiter when I asked what cheeses were in the fritters, but I eventually found out that they consist of fontina, assiago, and parmesan. With a relatively crisp exterior, I quickly realized this was a grown up version of a cheese stick. Served with honey mustard and a chunky homemade marinara, they fit the mold of adult version of the childhood classic perfectly. Even though the cheese fritters have improved over the years, I still don’t see the major attraction. The dish lacks any real hook to reel you in.

It’s always informative to see what your waitress recommends, and my waitress was more than happy to nominate a few dishes as the Amerigo’s specialties. Looking for something a little different, I eventually decided on the house smoked duck and sausage pasta.

Visually, this was a very pleasant dish, but I was annoyed to see an old Amerigo’s tradition was alive and well. In the middle of the dish was a huge clump of angel hair pasta. Normally I love angel hair, but at Amerigo, you can never extract a single strand; their angel hair always ends up being a starchy mass. As a result there was no real integration of pasta and sauce in this dish. It seemed that the rather spicy sauce made a moat around the angel hair. Looking past that, I started in on the almond wood smoked duck. While I could definitely taste the smoke, there was just a little too much and the duck was extremely overcooked. As for the sausage, it tasted like your generic store bought Italian sausage, not too bad but nothing to write home about.

After struggling to read my bill due to the extremely dim lighting, I was quick to wonder what exactly were most people in Mississippi thinking when they nominated Amerigo as best Italian? Are these the same people who can find no faults with Majestic Burger and Rooster’s? Am I too much of a food snob to appreciate the finer points of banality? Either way, when I’m in the mood for Italian, I’ll make my way to Bravo.

Amerigo gives me a sense of a restaurant in which their entire staff believes they have arrived. This place is still resting on laurels established many years ago.

On a couple recent visits, I ate there for late lunch, around 2 p.m. - the place was nearly empty, so you would expect for servers to be even more attentive. Not really. On the last visit I ordered a chicken flatbread sandwich - it was dry and tasteless, and to add insult to injury, the server forgot the dressing, which ended up being the only thing with any flavor on the plate. And it was probably ranch dressing right off the Sysco truck.

On these recent visits I was eating with my elderly parents and uncle, all in their late 80s. These are people who have been around when it comes to restaurants. Not only do they love good food, but they're chatty, funny and happy to be around young people. The blandness of my sandwich was upstaged by the blandness of our server. I got the feeling that all he really wanted to do was go somewhere and lie down.

It was a forgettable meal all around, but my parents like going there because it's Amerigo - which apparently still seems like a big deal for people from a small town who come to Jackson to eat at a nice restaurant.

Not anymore. Get over yourself, Amerigo.

I really believe that this could be a very huge plate to have it in our table, so it is very delicious if we only see it. Buy Viagra Viagra