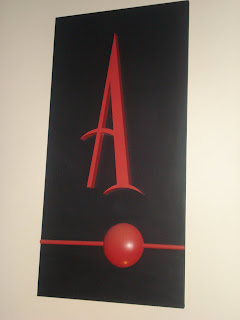 Even though I was going to Dallas to look at a car, I can’t turn down a chance to try a marquee restaurant. I was at a loss about where I should go until my sister reminded me that Kent Rathbun is located in Dallas. Kent Rathbun is the brother of Kevin Rathbun, Atlanta restaurateur extraordinaire, and like his brother, Kent is a hefty slice of humanity. Like his brother, Kent has a number of restaurants to his name, and his flagship is Abacus in the uptown area of Dallas.

Thanks to open table, I was able to get reservations at 9 on Friday night, and it was a good thing the reservation was so late; I was still quite satiated from my lunch at Mona’s.

Maybe McKinney Avenue is a little more prestigious than Krog Street in Atlanta, but Abacus seemed to be much ritzier than any of Kevin Rathbun’s restaurants. One thing the brothers definitely share is packed restaurants. Even with our 9pm reservations, we had to wait in the bar for a few minutes. Luckily sitting at the bar gave us a chance to look over the menus before we got to the table.

10 or so minutes later, we were shown to our table and we had our orders waiting. The first dish to arrive was one of the small plate specials for the evening, a Niman Ranch braised pork ravioli with ricotta salata and basil pesto broth. 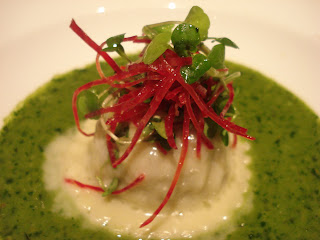 Inside the pleasantly thick ravioli skin were absolutely delicious and tender shreds of Niman Ranch pork. I was so blown away by the sheer flavor of the pork that I almost overlooked the basil pesto broth; that would have been an epic mistake. I tried my second bite dipped in the broth, and quickly realized that this broth was good enough to drink.

In addition to the pork ravioli, our lobster-scallion “shooters” with red chili-coconut sake came out at the same time. 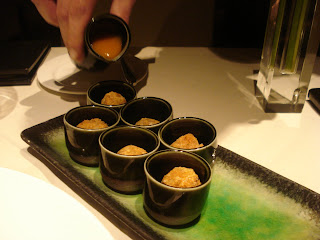 With the lobster shooters, we were able to enjoy a nice presentation. The fried lobster pieces were brought out in individual sake cups and then the thick chili-coconut sake was poured into each cup. 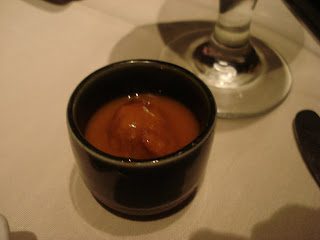 With the first shooter, I was delighted to taste a crispy and perfectly cooked piece of lobster. The sake sauce was extremely thick but very tasty with a slightly spicy overtone. One thing that really stood out to me was the coconut milk in the sake sauce, a very nice companion to the red chili. At this point, Kent Rathbun was more than impressing me with his creations.

After enjoying those first two small plates, we set about order a few more. In seemingly perfect harmony, the three all arrived at one time. The first of those was the “bacon and eggs”, which was Niman Ranch chipotle bacon with a scrambled duck egg over brioche and black truffle. 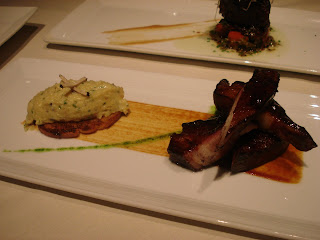 Just looking at this dish, I already knew I was going to love those huge slices of bacon. I had to try it first and I was completely overwhelmed. The pork was smoky, spicy, more than a little fatty, and completely delicious. I knew I was in love with the bacon, so I decided to try the duck egg, which was the waiter told me had been lightly scrambled with the truffle and cheese. Like the bacon, the duck egg was extremely tasty, but with a slight tang. I decided to try them together. 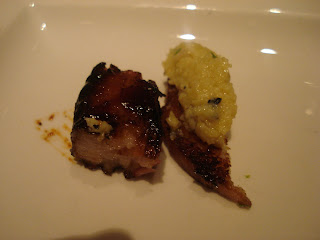 This was the perfect combination. The spiciness of the pork cut through the tanginess of the duck egg and allowed me to enjoy both pieces even more than before.

The absolute decadence continued with the butterscotch-miso glazed kobe short ribs with shiitake mushrooms and a charred scallion vinaigrette. 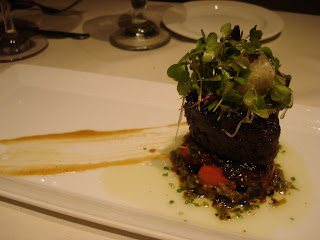 Wanting to switch up my order, I tried the shiitake mushrooms first and I was surprised at how delicate, tender and ultimately delicious they were. Moving on to the star of the dish, the short rib was brimming with the beautiful flavor of the miso. I had to control myself from eating the entire short rib in one bite, and I’m thankful I did. Each little morsel of the short rib was worth savoring.

Per the waiter’s recommendation, our fifth small plate was the wood roasted quail with grilled corn Johnny cakes and a strawberry-rhubarb marmalade. 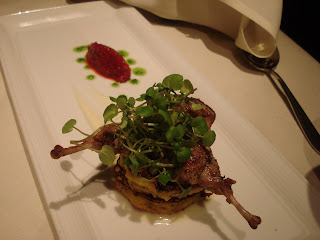 Still a bit sour from my quail at Mint, I was reluctant to try the quail, but my waiter convinced me otherwise. The first bite of the quail restored my faith in the fowl. The Johnny cakes were a treat as well as they had the perfect dichotomy of sweet and salty. However, the star of the plat was the strawberry-rhubarb marmalade, absolutely divine. As much as I enjoyed the quail dish, it was a bit of a disappointment in comparison to everything else I had tried.

I talked myself into ordering us two more dishes. It’s not often that you can enjoy craftwork like this, so why not indulge. 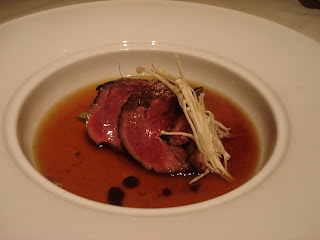 I had my eye on this dish the entire evening. A shabu-shabu of seared buffalo tenderloin with enoki mushrooms and black garlic consommé is not really what it sounds like. Instead of a boiling pot of water, the buffalo and mushrooms are brought out in a plate and the hot broth is poured over them. Depending on your patience, you can let them sit in the broth and reach your desired doneness. I am, generally, not a patient man. The buffalo was just as tender and excellent as I expected, and the consommé was deliciously full bodied. I only wish it had been cold outside, the consommé would have been all the more appreciated.

Last but far from least was applewood smoked bacon mac and cheese. 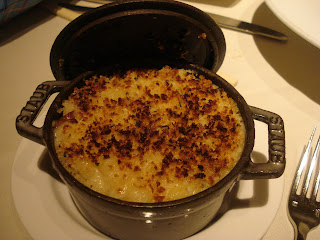 Kent Rathbun has presentation down to a science. The mac and cheese looked so inviting, but I didn’t want to disturb the delicately charred crust, but I did anyway. 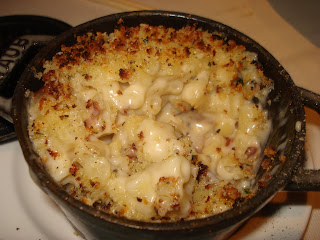 Our waiter informed us that this dish used a two year old white cheddar and sizeable chunks of applewood smoked bacon. As soon as I dug in, I was pleased to find an al dente pasta underneath a great panko breadcrumb crust. The real focus of the dish was how beautifully the bacon and the cheddar worked together. Despite being nearly stuffed to the gills, I devoured the entire container, but only after insisting that everyone try it.

After the plates had been cleared, we were tempted by the dessert menu, but stood our ground. Luckily Kent Rathbun had thought ahead as the waiter served our complimentary ganache truffles. 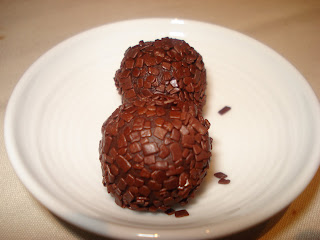 This summed up our meal. Even if we didn’t ask for something, it seemed that the staff knew what we really wanted. Our chatty waiter quickly picked up on my love of food and went out of his way to explain the dishes and their various ingredients, and he even got me a copy of the menu.

I can’t remember who won when the Rathbun brothers competed against an iron chef combo on Iron Chef America, but in my mind there is a heated competition between the brothers. Who has the best restaurant? Who has the most succulent piece of pork? Who can serve the best steak? All very good questions, but after my meal at Abacus, I think Kent Rathbun is winning.

The Rathbun brothers were "Flay-slayers" with their elk presentations.