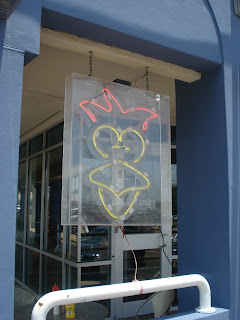 Three bacon cheeseburgers in one week sounds like the path to an early grave, and I’ll admit, both Sam and I were feeling the effects of so much cholesterol cursing through veins, but we soldiered on. Our third stop for the week was Roosters in Fondren.

Rooster’s definitely has the market on a great and trendy location, but as is often the case with trendy locations, parking was a bit of a bear. However soon enough we were in line and we had two 8 oz bacon cheeseburgers on jalapeno cheddar buns en route to our table.

After 20 minutes of waiting, I began to wonder if I should have asked for a tracking number for our order, but as usual, just as I was about to complain, a waitress shuffled her way outside and delivered our order. 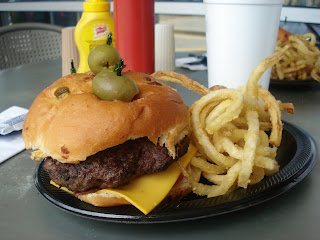 I’ll have to give roosters credit for an odd presentation. It’s not often that you see an olive on top of your burger, but I also saw an unmelted slice of cheese at the bottom of the burger.....never a good sign.

Underneath the patty were all the typical trappings of a dressed burger. 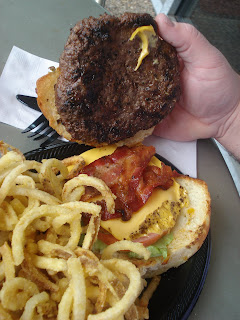 Pictured are onions, pickles, tomatoes, bacon and cheese, again nothing to write home about, especially that cold slab of cheese. In addition to the assortment of toppings, we were each given a generous order of fries, where were bland and cold. I think Sam described the fries best as “the fries are like a bite of history, with each bite I can taste how they used to be.”

Ignoring the fries, we went in for the first bite of our burgers and while there was a nice beefy flavor to the patty, everything else was cold and uneventful, particularly the insipid slices of bacon.

Always telling, our ratings were as follows:

The sad thing is Rooster’s had potential, but slow service begot cold food and a lackluster score. The past three burgers have set me wondering. Do the people of Jackson have such low standards for burgers or are Sam and my standards too high? Judging by the popularity of so many low quality restaurants across the city, I’m going to say that Jackson has been brainwashed by the allure of cheap, fried, and salty and has left flavor behind.

Buddy. You're WAYYY off. Rooster's is the BEST place to get a burger in Jxn BY FAR. They also have an assortment of other items on the menu that will blow you away... SORRY YOU HAD A BAD EXPERIENCE. I never have, there.

-Thanks for reading and thanks for the cordial dissent, but I have to disagree about Rooster's and their burgers. I've been back there since this post and I was still let down by the burgers.

What, besides the burgers, do you recommend as far as something that will blow me away?