After the entertaining meal of Korean bbq at Chosun Ok the night before, I was in the mood for some completely different for lunch the next day. In some random fashion, I ended up at Nava, the outpost for southwestern cuisine in the Buckhead Life restaurant group.

I normally steer clear of southwestern cuisine, especially when I’m outside the southwest, but I figured it couldn’t hurt to give Nava a try. Unfortunately, my ears weren’t ready for the onslaught of the Gypsy Kings, whose music was blaring across the restaurant as soon as I walked in.

Once I got past the chintzy décor that was full of pueblo Indian rip offs, I put in my order and was given a basket of bread in return. 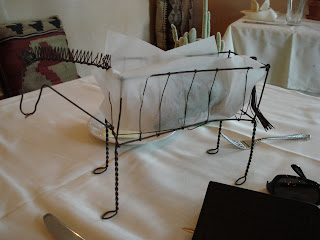 I’ll give Nava credit, I think the idea of wire horses as bread baskets is really funny and kitsch. 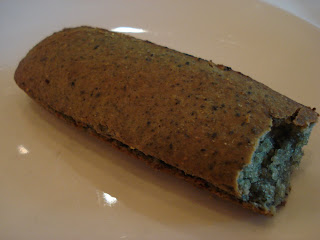 The blue cornbread inside wasn’t bad either. Well cooked and a little salty, the cornbread had me thinking pretty favorably of Nava 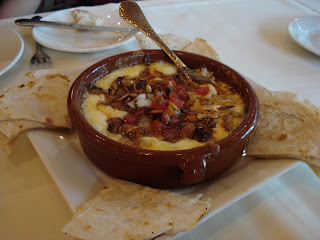 This queso fundido was called “Mexican cheese fondue” with chicken tinga. Made with goat cheese, toasted pumpkin seeds, and salsa fresco, this fondue was strong but nicely flavored. Unfortunately, the Mexican fondue had a flaw; it didn’t come with enough tortillas. By the time more tortillas were brought to the table, the cheese had solidified into one huge, cheesy mass. Definitely a poorly thought out presentation.

Maybe I’m a fool for doing so, but I try to have a fair amount of trust in my waiters. In this case, I took my waiter’s advice and tried the green chili lobster soft taco. 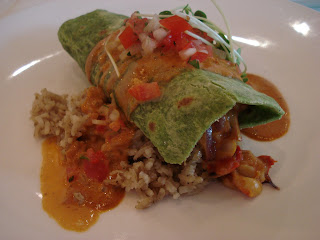 Call me a bit too practical, but I think tacos should be eaten with the hands. Any taco that requires a knife and fork, like this one, defeats the purpose of a taco, and using a delicately flavored meat like lobster in this sort of dish defeats the purpose as well. Whatever flavors the lobster brought to the dish were lost amidst a sea of chilies.

In retrospect, it was my fault that I had a subpar lunch. Regional fares like southwestern or Cajun food rarely thrive outside of their natural habitat. I was chancing fate by even trying Nava and their lobster tacos. Next time I want southwestern cuisine, I’ll just wait until I’m back in Texas.