Last Saturday, my buddy Alvin and I were in a quandary. We were looking for some place new for lunch, and “new” can often be quite a challenge for . Out of nowhere, I suggested we try Mint.

For those unaware, Mint is the companion restaurant to Julep in highland village, and having been relatively pleased with Julep over the years, I had decent expectations for Mint.

While waiting on the hostess to show us to our table, I was able to take in all that Mint and its appointments had to offer. It screamed “I watch too much hgtv”, but décor is the least of my worries, I was more concerned about the food.

Having decided to go with two appetizers, I was disappointed when my coca cola glazed grilled quail was brought to the table. 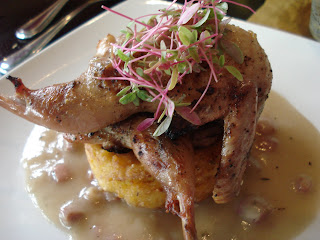 The dish sounds great in theory; farm raised quail is grilled and then glazed with coke, served over a delta grind grit cake, and garnished with smoked ham red-eye gravy. However, the theory was not well executed at all. Despite having barely any grill marks, the quail tasted like old, dry smoke and was beyond overcooked. Where was the coca-cola glaze? I was hoping for a mixture of smoke and sweet. The rest of the dish is hardly worth mentioning. Sure the grit cake was well cooked but lacked any seasoning, and the red-eye gravy did have nice chunks of ham, but where was the coffee? I want my red-eye gravy to have some chutzpah to it, this tasted like they used coffee brewed for newborns.

After an appetizer like that, I had little hope for my other. Soon enough my mint mini burgers arrived. 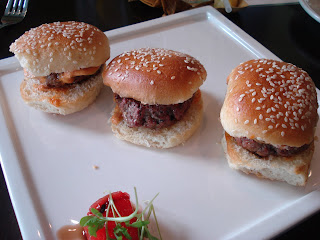 Served with truffle scented French fries and balsamic “spiked” watermelon, I soon realized I could have had a better meal at the Sonic drive in. Like the quail, the sliders were overcooked. 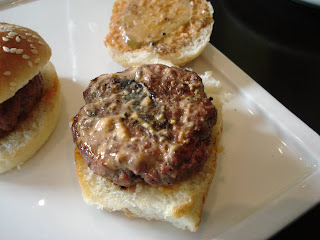 Whatever sauce they tried to put on the burgers was hugely overshadowed by the slice of pickle. This was a terribly thought out dish. 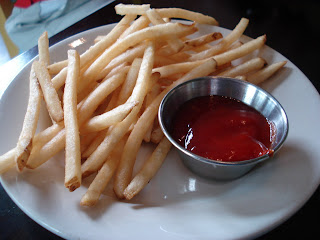 I suppose there is a fair amount of leeway with the term “truffle scented”, because that means these fries could have been within 10 feet of a open bottle of truffle oil. Maybe there was some ambient truffle scent, but all I could smell and taste was plain, old French fries, and not very good fries either.

, being the kind & generous soul, offered up a little of his crab cake entree. 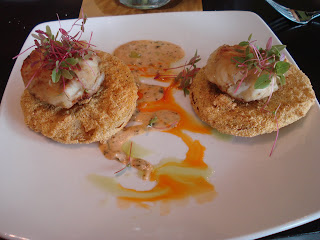 Have you ever seen such tiny crab cakes? If you went by these morsels, you would think there’s a crab shortage in . Unfortunately, the flavor was as tiny as the crab cake. At least mint could fry a decent green tomato, but I credit that to Julep.

When the bill came, Alvin and I were both flummoxed. 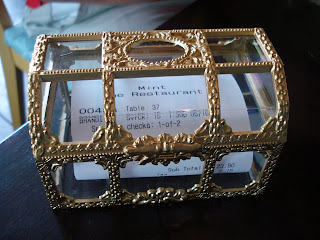 Not only was it an odd and chintzy presentation, but the bill was astronomical for the quality and quantity of food. Those microscopic crab cakes cost $13, and that poor waste of a quail was $12 for an appetizer. Prices aside, I was astounded to see that the Jackson Free Press had awarded Mint the prize of “best new restaurant”. I realize that doesn’t have many new restaurants annually, but were the choices so few that they had to pick Mint?

I could not agree more. I went in one night with my wife and another couple and the bill was over $400.00 not counting tip. We had a couple bottles of wine which were about $50.00 each. And 3 coarses but I still felt like I had been bent over. Will no return ever.