For the past 6 or 7 years, every Memorial Day weekend has found me on the way to for the Indy 500. At 600+ miles, it’s a lengthy drive, and without much between and , finding a decent lunch can be quite a challenge. Conveniently, as soon as you cross into , you’re inundated with signs for Lambert’s, home of “throwed rolls”.

Once exit 73 on i-55 north rolled around, I pulled off and was soon out of the car and walking to the entrance. 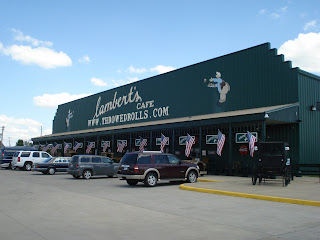 You can’t help but be a little shocked at the sheer size of Lambert’s and the constant smell of rolls.

When you step inside, you continue to be shocked as seemingly every piece of and kitsch has made it inside this one building. From knick knacks on the walls to flags from every state, Lambert’s is a real slice of .

Even before I could a menu, the star attraction rolled out of the kitchen. 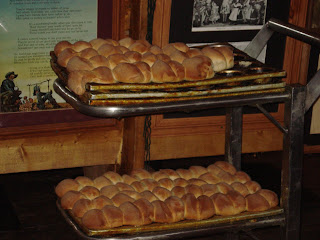 Hot and fresh from the oven, there’s a trick to getting a roll. 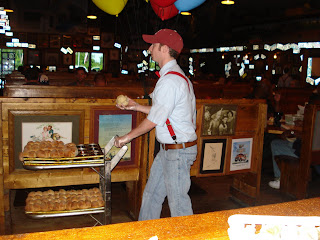 The idea is the roll man asks who wants a roll, and people yell and throw up their hands. Seconds later, a roll is hurled to a lucky recipient. I’ll admit the thrower has some serious skill. He will throw you a roll from 2 feet away to 100 feet across the restaurant floor.

Sitting at a bar next to the kitchen, I received my roll by a simple underhanded toss. 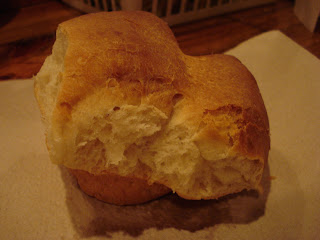 With a great crusty top and good flavor, the rolls really are the best thing at Lambert’s 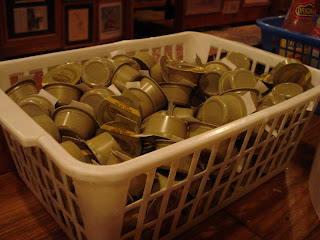 How can you enjoy your roll without butter? Actually, once you get a little butter on one of the hot rolls, you’re hooked. It takes every measure of self control not to sit there eating nothing but butter and hot rolls.

A nice feature at Lambert’s is the idea of a “pass around”. Various members of the wait staff walk around the restaurant with a bowl or pot and pass out small servings of side dishes. The first “pass around” I got was a spoonful of fried okra. 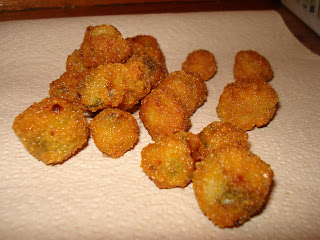 Perfectly fried and not at all mushy, the fried okra were a great start to the “pass arounds”.

After 10 or so minutes without a menu, my waiter realized his mistake and quickly brought me a menu. Not having been here in a year, I asked him if Lambert’s was known for anything besides the rolls. With his negative response, I decided to try out their hot beef sandwich. 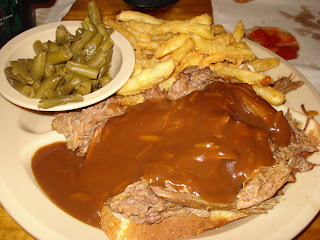 Doesn’t look too bad does it? It does to me. I hate eating on plastic plates, I feel like I’m at Piccadilly or a hospital. 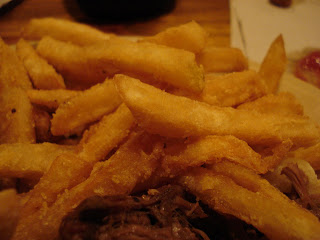 The fries were the first thing I tried, and my God were they terrible. Dense and tasteless, these fries had the innate ability to go from oily & crunch to gummy in a single bite. Simply uncanny. 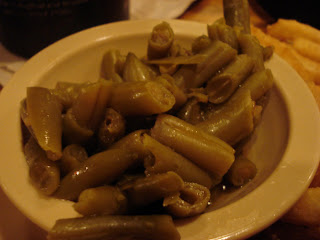 I thought I might fare better with the green beans, but I was wrong. Way too salty and tasting like they came from a can, I didn’t even dare to finish the bowl. 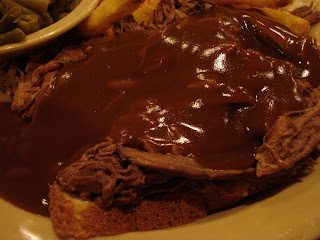 Roast beef with gravy is supposed to be a sublime dish, but a decent cut of beef is quickly ruined by a terrible, powdered mix gravy.

Leaving the entrée behind, I was soon able to get a tally of the “pass arounds” for that day: macaroni & tomatoes, fried okra, fried potatoes, and black eyed peas. 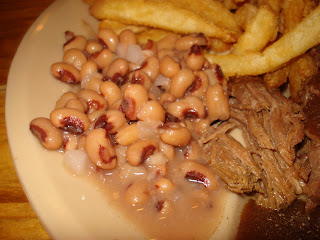 I was able to try some of the black eyed peas, and they weren’t bad. However, the first thing that popped in my mind was “these peas are a little flat, they need some pork.” That probably says more about me than it does the peas.

The last thing I was able to try was a generous spoonful of the fried potatoes. 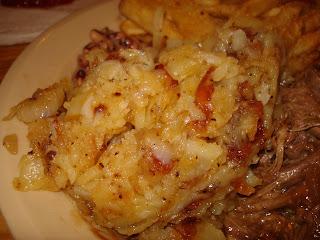 Full of peppers and onions, the fried potatoes “pass around” might challenge the rolls as the best thing at Lamberts.

On the way out, I thought there is one thing that I can’t fault Lambert’s for, and that’s portions. For the sheer size of the entrees to the constant supply of “pass arounds”, Lambert’s is the perfect place to get a cheap, filling meal. However, the negatives of Lamberts outweigh the few positives. Besides, I stuck out like a sore thumb in madras and a polo shirt. I would need to buy more jorts, camo, and Jesus/American flag shirts to be a regular at Lambert’s.

Good review! It's too bad when the food doesn't measure up to the hype. In a huge place like Lambert's, where they serve busloads of people all day, they take shortcuts.

But then, the novelty of the food delivery counts for something, especially if you're on the road and are ready for some excitement. They have certainly become legendary for their throwed rolls.

I can't believe that anyone doesn't like Lambert's. The food is awesome, more than generous portions and rolls to die for. The waiters and waitresses are incredibly friendly for the most part-the worst thing is the usually long wait to eat, but believe me it's the only place my husband will wait 2 hours to eat. Radar

My family and I stopped at Lambert's a couple of years ago while on vacation. We loved it, especially the grandkids. I'm getting ready to go back to MO next weekend and I'm sure everybody will want to go back to Lambert's. Yes, the rolls are good, but you really should try the ribs, too.

I have lived in the region for over 20 years and finally decided to give it a try. I stood in line forever, and was finally seated near the kitchen. My wife and I came near the rolls only as they exited the kitchen. With his back to us, and several other cutomers, the waiter threw rolls around the room...except to us and the tables near us. The food was asdescribed in this review...OK, I found it to be worse. The food was very oily and heavy. I found Lambert's to be very expensive considering how little we ate. I really don't see value in getting a large quantity of food that is so pooly cooked that it can't be eaten.