Needing something for lunch this week, I realized it’s time for another foray into the world of Fuchsia Dunlop. Picking up my copy of , I flipped to a recipe I had marked months ago: shredded beef with sweet peppers or tian jiao rou si.

After reading through the recipe, I realized this is what is often labeled as pepper steak. It had a pretty simple ingredients list, so I decided to get started with the beef. 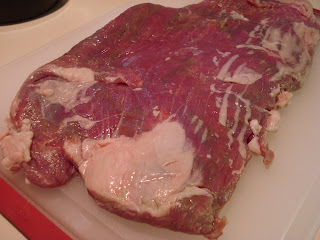 The recipe calls for a ½ pound of lean beef ( flank steak), but I wanted to make something for multiple lunches. Having a 2 lb flank steak, I decided to quadruple the recipe. This might have been a bad decision. 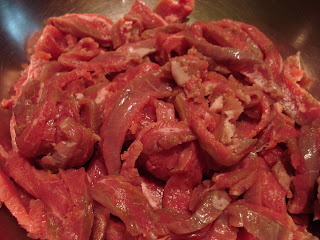 Regardless, I went ahead and cut the beef against the grain into “fine slivers”. I’m always worried about Dunlop and knife work. After reading her memoir, I’m convinced that my idea of a sliver is vastly different from hers.

With my beef sliced, I gathered the ingredients for the marinade. 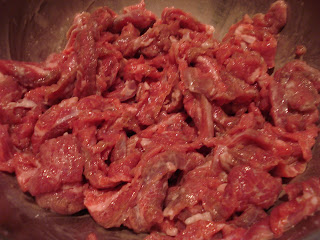 ½ teaspoon of salt, 2 teaspoons of shaoxing rice wine, and 3 teaspoons of corn starch, all quadrupled for this version.

My marinade finished and put in the fridge, I cleaned off my cutting board and knife and got out the peppers. 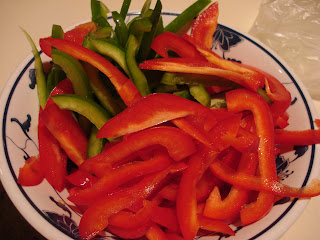 Calling for ½ a red bell pepper and ½ a green bell pepper, I cut both whole peppers into long slivers, matching the steak strips as best I could.

I needed to make one last thing before I could start cooking: the sauce. 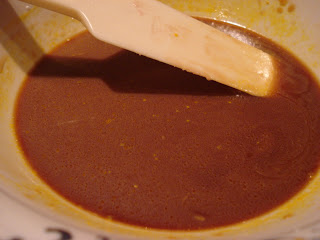 Adding together 1 ½ teaspoons of light soy sauce, ¼ teaspoon salt, ¾ teaspoon of cornstarch and 3 tablespoons of chicken stock x4, I quickly had my sauce ready to go.

Cooking starts by adding a tablespoon of peanut oil to a wok over medium heat. 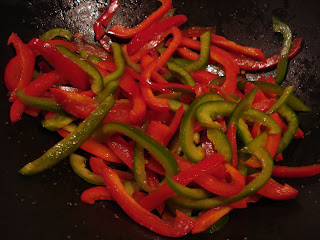 I then added the peppers and ¼ teaspoon of salt, stir fried for a minute or so, and then removed them from the wok.

With a clean wok set on high, I added 3 tablespoons of peanut oil and waited until it was beginning to smoke. 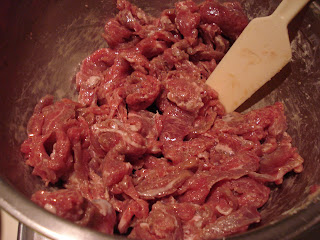 I had pulled my marinated steak from the fridge and was about to add it to the wok, when I remembered the last ingredient. 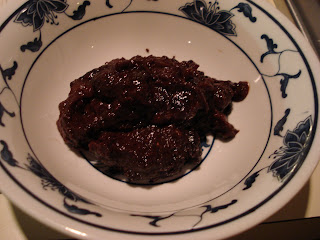 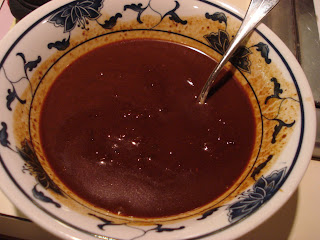 8 teaspoons of bean paste seems like a lot of salt.

Bean paste mixed, I added the steak to the smoking wok. 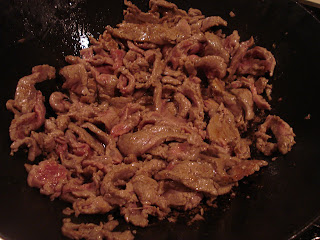 and stirred briskly. Per Dunlop’s instructions, as soon as the strips had separated, I added in the bean paste mixture. 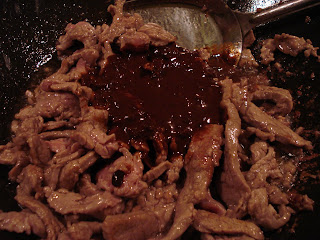 I then stir-fried until “hot and fragrant”. I had vague instructions. 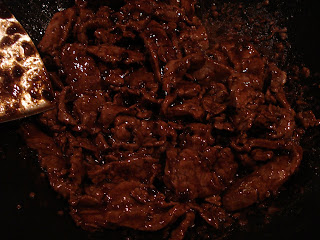 However, as soon as the bean paste hit the wok, I really could smell them. I realized the broad bean paste was one of those mystery ingredients that kept me from perfectly recreating dishes at home.

In went the peppers 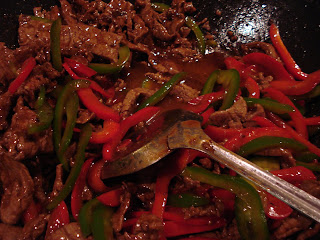 After adding the peppers, I stirred and cooked everything until the sauce had slightly thickened, and then I turned off the heat. 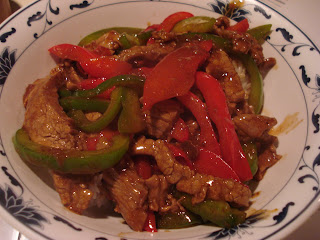 and I have to say, I was very pleased with this dish, although it was a little on the salty side. I chalk that up to me being overzealous and trying to quadruple the ingredient list. I have a feeling that broad bean paste takes a few attempts to use correctly. Either way, shredded beef with sweet peppers is another great recipe from Fuchsia Dunlop and her tome of Sichuanese cooking.