Having been lax on the home front, I thought the past weekend would be great to do a little cooking. After perusing my shelves for cookbooks, I decided on a recipe from “Jamie at Home”, the cookbook for Jamie Oliver’s show of the same name. Leafing through the book, I made a list of recipes I could try, but I decided on his balsamic-baked onions and potatoes with roast pork.

Saturday morning came with a quick visit to the best butcher in town, Paul Anthony’s, and I arrived home with this in tow. A 3 ½ lb boneless pork loin is a good start to any dish. With this pork loin, I needed a whole mess of herbs. Thankfully, there is a nice supply in the little garden in front of our store. 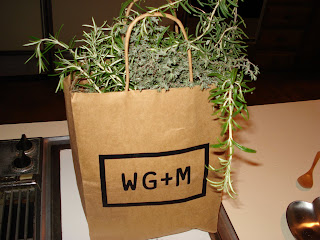 The results of a quick garden raid were fantastic.

With the pork loin washed and waiting, I got my herbs ready. In an effort to thoroughly flavor the pork loin, the recipe calls the herbs to spread over a chopping block. 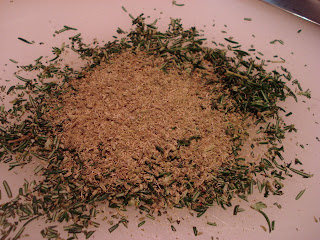 Freshly ground fennel seeds and a small bunch of chopped rosemary leaves, combined with a good amount of ground pepper and kosher salt cover the cutting board. I then proceeded to roll the pork loin in the spices, making sure everything was nice and covered.

After I found a properly sized roasting pan, I put it over medium high heat on the stove and then added a little olive oil. 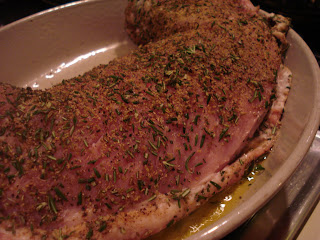 By putting the loin fat side down, everything comes out nice and caramelized.

While the pork loin was browning, I quickly chopped up the rest of the ingredients for the loin. 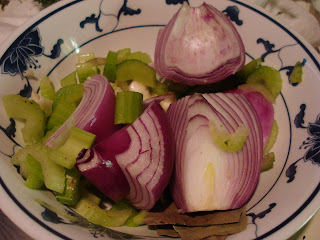 This bowl of 6 crushed garlic cloves, a medium, peeled & quartered red onion, 2 stalks of chopped celery, and 4 bay leaves was soon added to the pork. 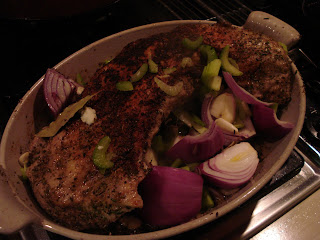 Everything was looking great and was put in a 400 degree oven for about an hour.

Getting on to the balsamic-baked onions and potatoes, I started with a roasting pan over two eyes 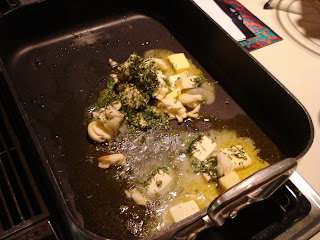 I then added a good slug of olive oil, 7 ounces of butter (kerrygold in this instance), another bunch of chopped rosemary leaves, and a whole bulb of garlic that had been peeled and smashed.

As soon as everything was looking good and unhealthy, I added in my potatoes. 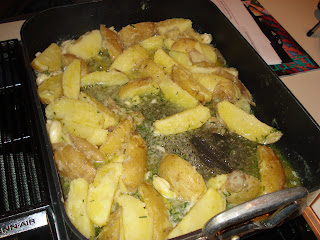 I had about 3-3 ½ pounds of golds that I had quartered lengthwise and par boiled. Per Jamie’s instructions, I had “chuffed” them in the pot I boiled them in. I guessed that “chuff” meant to shake.

When the potatoes had been coated in butter, in went the onions 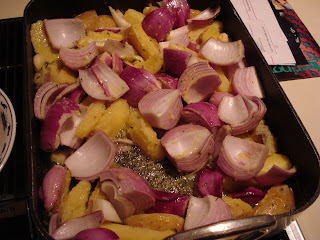 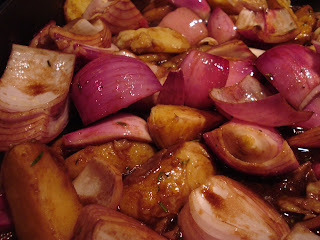 After seasoning to taste with salt and pepper, 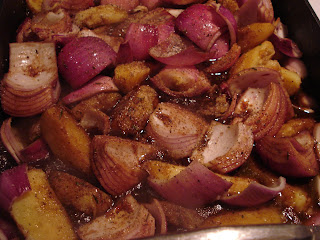 the whole pan went in the oven with the pork.

While I was putting in the veggies, I snapped a shot of the pork loin. 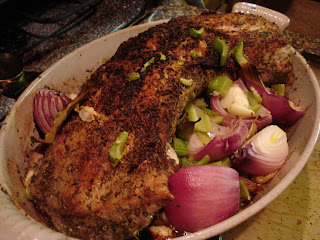 Looking pretty good so far, and after a quick basting, I shut the oven door and left everything to cook.

About 50 minutes later, I took a look at the pork and decided it was time for everything to come out. 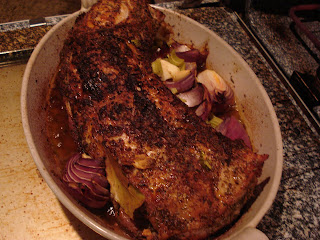 The pork looked pretty good, and the onions and potatoes were quite a site. 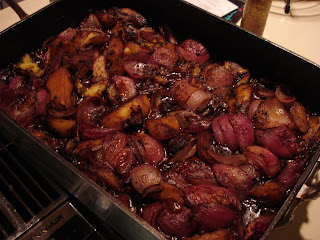 Needing time to rest, I covered the pork and set it aside while I made a quick pan sauce. 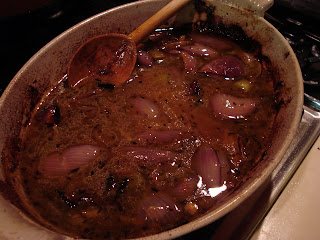 Per Jamie’s instructions, I did my best to mash up the onions and garlic and added 2 or so cups of white wine. I’ll admit I was lazy, I didn’t pass the gravy through a sieve, but I prefer the more rustic look.

I loved how the pork came out. 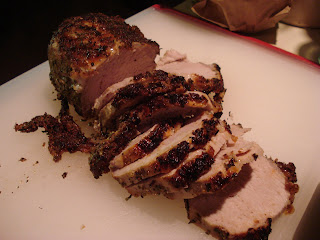 The fat cap combined with the spices made a wonderful crust that permeated the entire loin. 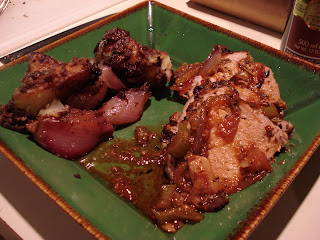 But I believe that’s the point of Oliver’s “Jamie at Home” cookbook. This is rustic cooking from things you grew on your own. The presentation might not be good enough for a spread in food and wine, but the taste is spectacular. The unique flavor of the balsamic permeated every piece of the potatoes and onions and mellowed a little in the process. Really, this was a spectacular dish, and I wouldn’t hesitate to make it again. I’m looking forward to my next opportunity to cook from “Jamie at Home”.

Email ThisBlogThis!Share to TwitterShare to FacebookShare to Pinterest
Labels: balsamic vinegar, Cooking at Home, cooking the book, Jamie at Home: Cook Your Way to the Good Life, pork