Cooking the Book: The Breath of a Wok - Ming Tsai's Mandarin Fried Rice

You know the drill, I needed something for lunch tomorrow, and fried rice seemed like a pretty good idea. Luckily, I had a pretty reliable recipe from Grace Young’s “The Breath of a Wok”. Called Mandarin Fried Rice, this was supposedly the first dish that Ming Tsai ever learned to stir-fry.

There was only one problem with this recipe; it called for Chinese sausage, and I wasn’t interested in digging through the freezer for a single sausage in a package of 12. So, I decided to substitute a couple of pork chops. 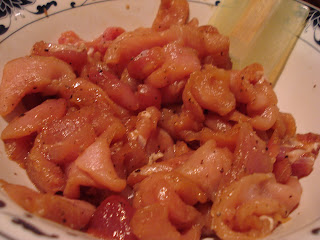 Obviously I couldn’t throw in two pork chops and call it a day. So I cut the chops into thin slices and made a quick marinade of shaoxing wine, light soy sauce, salt, and pepper.

While that was marinating, I got the rest of my ingredients ready. 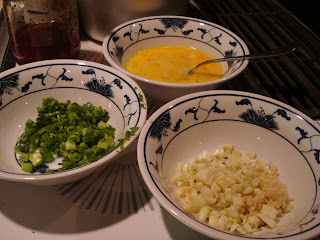 Clockwise from the top, there are 2 eggs, beaten, ½ cup ( give or take) of sliced scallions, and 2 tablespoons each of minced garlic and ginger.

With the prep work done, I got everything in place and ready to cook. 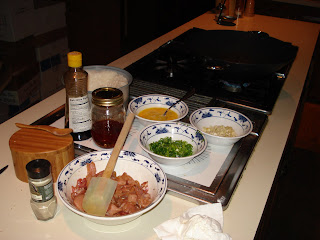 Everything looks pretty good, so I was ready to make my lunch. 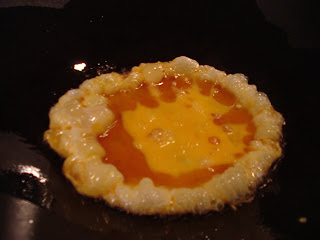 Next in went the eggs. The idea is to tilt the pan and make a thin egg pancake. A minute later, I did my best attempt at flipping the egg. Five seconds later, the egg was out of the wok and onto a cutting board. 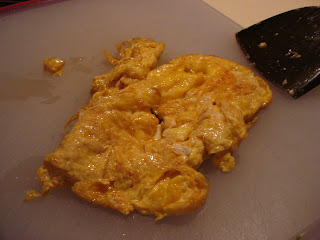 After that cooled down for a minute or two, I cut it into fine shreds. 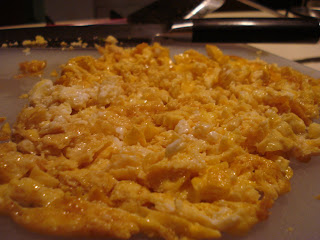 Now that the egg was cooling, I remembered that I had forgotten to velvet the pork. So I added a little more chili oil, and dumped in the pork. 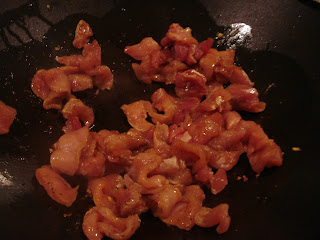 I didn’t want to overcook the slices, so I made sure just to cook them until they lost the raw color. 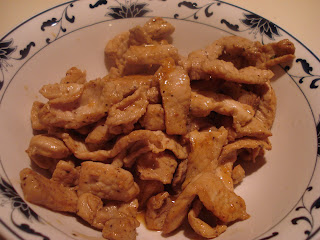 Two minutes later, I drained my wok and had my pork ready to go.

Adding more chili oil to the wok, it was time for the aromatics. 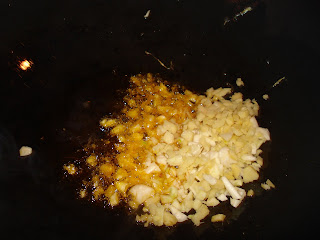 The garlic and ginger only needed to be stir-fried for 30 seconds or so, before the pork was reintroduced to the wok. 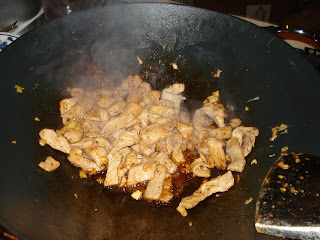 Stir-frying for just a minute, I then added the scallions and 4 cups of cooked rice. 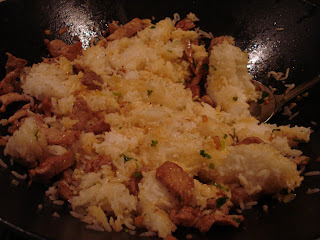 I just wanted to heat the rice through before the last few ingredients were added. So after 2-3 minutes, in went the rest. 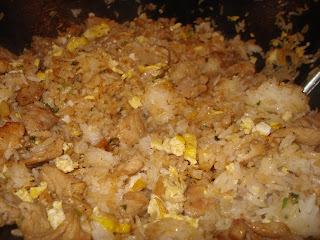 2 tablespoons or soy sauce, ½ teaspoon salt, ¼ teaspoon white pepper, and the eggs shreds were added to the wok.

Everything was given a good toss and was then ready to serve. 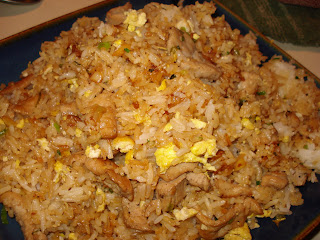 Fried rice is something that most people never really come to appreciate because it’s often seen as nothing more than a cheap side dish for General Tso’s chicken. This recipe bursts with the flavor of garlic and ginger and has a nice heat from the chili oil. The slices of pork weren’t a bad idea, but they were lacking something. Maybe next time I’ll try the Chinese sausage and see if the original recipe is best. Regardless, it made a damn fine lunch.

WOW! That looks amazing. Can I come next time you make it?

If you are a fan of Ming Tsai, check out this interview he did on Obsessed TV:

Thanks for the compliment. If you'd like some fried rice, just let me know.