Ever since I got the “Bakewise” cookbook for Christmas, courtesy of my sister, all I’ve heard is “how good the biscuits are” and “have you tried to make them yet?” After 5 or so months of this, I finally relented and set aside last Sunday afternoon as biscuit time.

Before I dove into the messy world of self-rising flour, I set about making the optional cherry-Chambord butter. 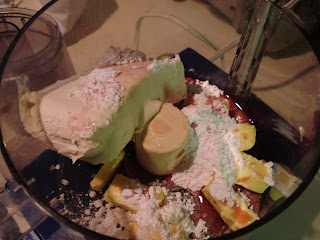 Into my food processor, I added ½ cup of unsalted butter (kerrygold), an 8 oz package of cream cheese, 2 tablespoons of , and 1/3 cup of confectioner’s sugar. 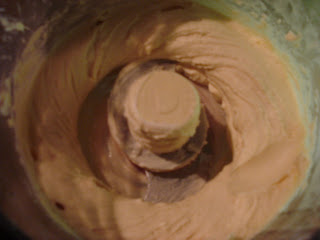 Everything blended together nicely, so I dumped everything into a bowl and added the last ingredient. 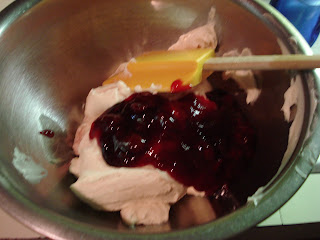 4 heaping tablespoons of cherry preserves went into the bowl 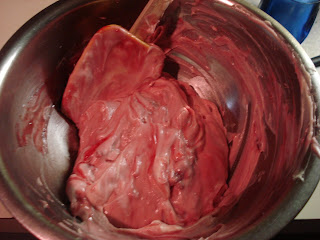 After everything was mixed together, I was left with a rather unappetizing looking butter. All looks aside, I gave it a taste and was blown away; this was one of the best spreads I’ve ever tasted. Resisting the temptation to eat it all in one sitting, I put the bowl in the fridge and started the biscuits.

Starting with 2 cups of self rising flour in a bowl, I added in a ¼ cup of shortening. 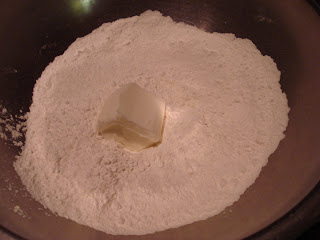 Per Shirley Corriher’s instructions, I worked the shortening into the flour with my hands until no more large lumps remained. 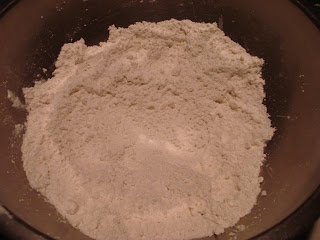 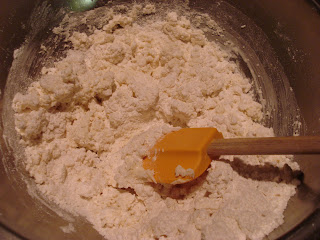 Next I stirred in 2/3 cup of heavy cream. After that came the important part, the buttermilk. Starting with a full cup of buttermilk, Corriher called for the buttermilk to be stirred in until the mixture has the consistency of cottage cheese. 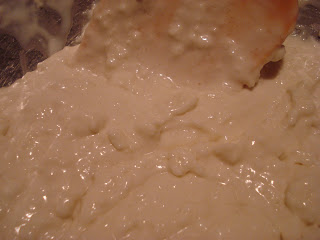 I think I got pretty damn close. As soon as that was done, I got a plate and poured a cup of all-purpose flour all over it. Next taking my trusty ice cream scoop, I put 4 scoops of the dough on the flour covered plate. 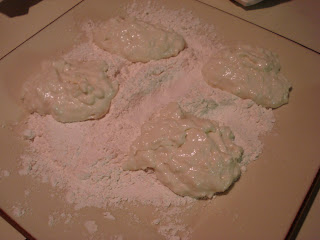 The idea is to cover your hands with ap flour and then sprinkle flour over each scoop. Once that is done, take a scoop in your hand and do your best to form it into a round. I then placed each biscuit into my greased baking pan. 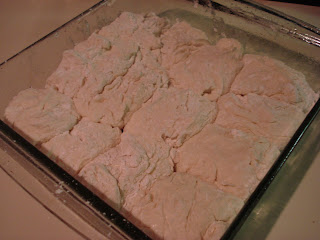 The recipe called for a 8-9 inch round cake pan, but you do with what you’ve got. Also, it’s incredibly hard to make this dough into a ball, but I did my best and got all the balls into the pan with as little crowding as possible. Actually the recipe calls for each round to be scrunched against its neighbor. This way the biscuits grow up instead of out.

I got the pan into my 425 degree preheated oven and set my timer for 25 minutes. As luck would have it, with about 7 minutes to go, the power went out. Using my best judgment, I decided to leave the biscuits in the still warm oven for a few extra minutes to compensate for the lack of heat. 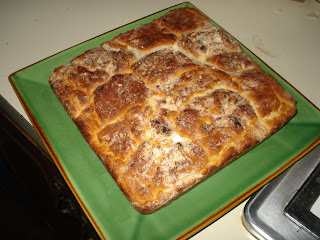 Using my iphone for light, here are my biscuits after they have been inverted on one plate and then another. They might be a little unsightly, but damn it, these were extreme circumstances.

While they were still warm, I did my best to cut the biscuits apart. Success! I decided to celebrate accordingly. 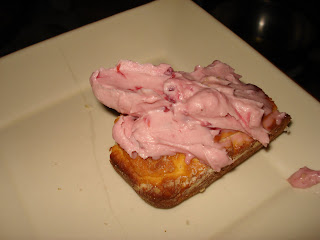 All I have to say is that these are the best biscuits I’ve ever had. I thought I might have been influenced by the butter, but a few days later my opinion stayed the same. If these are the sort of recipes I can expect from Bakewise, I’ll be cracking it open much more often, besides I have to know what these biscuits are like when they’re fresh from the oven and coated in real butter.

Email ThisBlogThis!Share to TwitterShare to FacebookShare to Pinterest
Labels: Bakewise: The Hows and Whys of Successful Baking with Over 200 Magnificent Recipes, Biscuits, butter, cooking the book, Shirley O. Corriher, shortening