As I’ve said before, serious eats is a great website, and 3 cup chicken is a recipe that I’ve been holding on to for a while now. After seeing a great picture on the photograzing section, I clicked through the links and eventually arrived at this recipe.

I liked everything about the recipe except the first step of frying. Normally I’m all for frying chicken, but last weekend I wanted something that didn’t remind me of Chinese buffet chicken. So, I did a quick google search and noticed there are few differences between the various recipes. Soon enough, I found a recipe that I liked and decided to combine the two

After some measuring and quick knife work, I had everything ready for cooking. 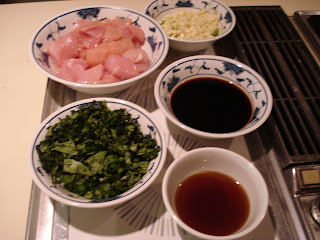 One thing that did bother me about all of the recipes is the amount of basil. 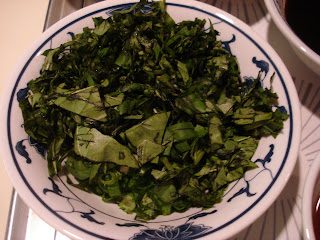 Originally calling for 2 cups of chopped basil and 1 cup of chopped scallions, I decided to pare it down to 1 cup apiece.

With my wok now hot, I started by velveting the 2 or so pounds of chicken breast in my 1/3 cup of sesame oil. 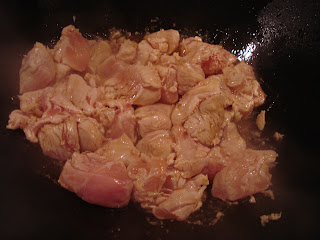 This is one example of how I combined the recipe. Instead of dealing with the inconvenience of bone in chicken pieces from Lily’s version, I went with the boneless chicken of blog chef. Either way, I thought the bones would be of more use in a stock later on.

The chicken velveted, I added in the garlic, ginger and Serrano peppers. 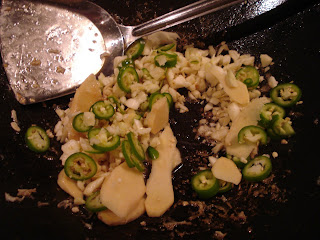 I love how vague recipes can be. Here I have 2 chopped Serrano peppers (with seeds!), 20 or so cloves of garlic (one called for a bulb and one called for 20 cloves), and last but not least, 10 thin slices of fresh ginger. Not knowing their definition of a “slice”, I just winged it.

Once those ingredients became very “fragrant” (cooking for 1-2 minutes), I reintroduced the chicken. 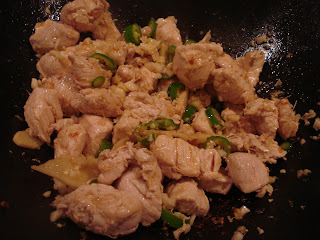 Now it was time to add the other 2 cups of the three cup chicken. 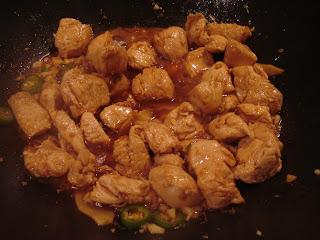 Now I was again at a crossroads, I could either use a small corn starch slurry and thicken the sauce, or I could per Lily’s instructions and cook on low for 30 minutes. 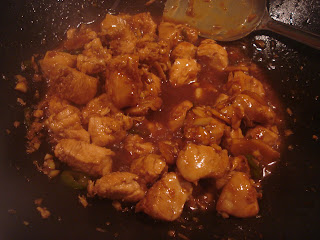 It was already 3 in the afternoon and I had planned to make this for lunch; I went with the slurry.

4-5 minutes on low later, I cranked the heat back up to high 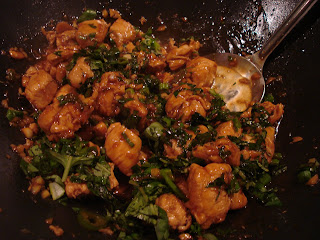 In went the last ingredients, 1 cup of scallions and 1 cup of basil, both chopped.

I cooked everything together for a minute and then immediately served over white rice. 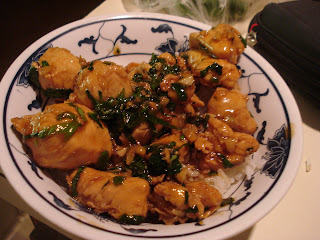 Two things popped immediately popped into my mind. 1, how did those two little peppers make it this spicy? I’m not complaining; I loved the constant heat of the dish, definitely a nice surprise. 2. I couldn’t shake the feeling that this tasted a lot like hoisin sauce. Also, I was very pleased with the flavor of the basil, and I can only imagine that a full 2 cups would ruin the dish.

Lastly, I know the recipe is called 3 cup chicken, and my version and the other 2 only used 1/3 cup amounts, but I’m pleased with the results. Maybe I’ll try the full 3 cups and see how everything tastes, but I’ll need to hunt down some more shaoxing wine, not an easy task in .