After a late lunch at the Brick Store Pub, I wanted something a little off the wall for dinner. I don’t remember who suggested it, but my sister and I decided Korean bbq sounded like a fine idea. Some discussion and time later, we went to meet Aaron and his brother Jordan at Chosun Ok.

Like most places on Buford Highway, Chosun Ok looks like it used to be a burger joint, but any ideas of greasy burgers were gone once we were seated at our table. 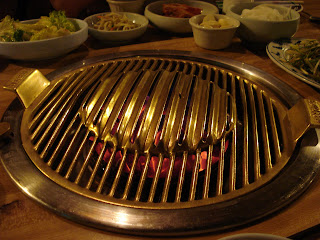 I’m always a fan of a place where you have some interaction with your food. Unfortunately, it was late for a Tuesday night and the waitress thought we needed all the help we could get. On a random note, if you look past the grill grate, you can see the hardwood charcoal. I’ve never cooked on bulgogi on a charcoal grill before, and I was excited.

Soon enough, our orders were brought to the table. 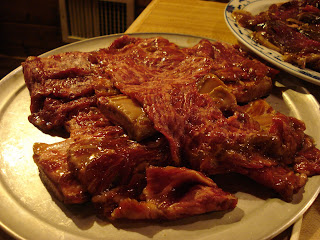 Here you can see our double order of kalbi (short ribs), and in the background, you can just make out the bulgogi.

Like I said before, I like to cook my own food, but the waitress was having none of that. 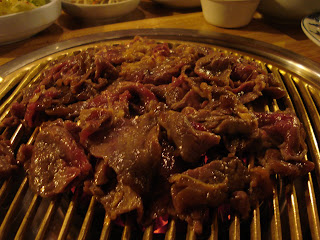 After putting all the bulgogi on the grill, she took out a pair of kitchen shears and cut the kalbi into more manageable chunks. It was actually quite frustrating. The waitress even went as far as to put the meat on our plates for us. I know when the meat is done and I know when to take it off the heat. I asked her if she does this for everyone and she replied we were the last customers, not too subtle is it?

One of the great things about eating with this group is that we never hesitate to order something else. 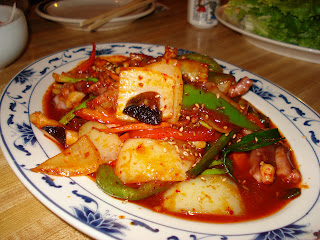 Even with a grill full of beef, we decided we needed an appetizer of spicy octopus. 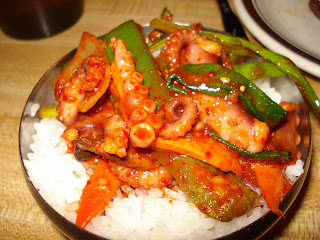 I decided I could get a better look at the octopus with my own bowl. Chock full of vegetables and carrying a fair amount of heat, this was a great appetizer. Unfortunately, it suffered like many oriental dishes; plenty of cheap vegetables, not enough of the main attraction.

As soon as I figured out what our waitress was doing, I tried my best to subvert her plans. After sneaking off my own piece of kalbi, I tried the traditional way. 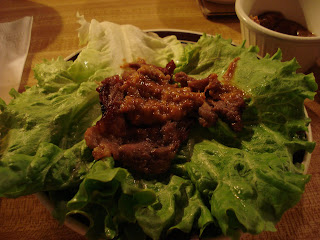 Tasty but cumbersome, this is a mess waiting to happen. Incidentally, the kalbi is miles better than the bulgogi at Chosun Ok. It’s as if the bulgogi is nothing but choice cuts while the kalbi is full on prime.

Being men, Aaron and I were soon trying to grill every single one of the typical bulgogi side dishes. Fortunately, we realized that grilled kimchi is great. 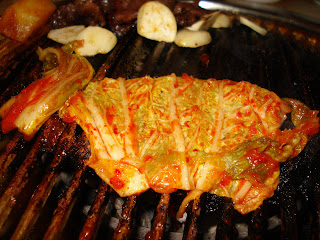 By adding a little temperature to the already excellent & spicy kimchi, it became a knockout side dish. 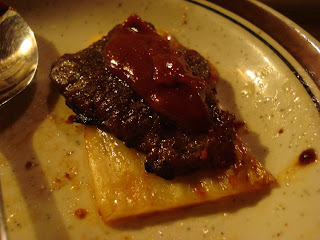 Taking it one step further, I decided to combine the best of everything. With a piece of kimchi, kalbi, and red sauce on top, I went for the gusto. Unfortunately, I realized this dynamite combination at the very end of the meal.

Once the cooking was finished, our waitress turned off the vents and we realized that the restaurant was graveyard quiet. We quickly finished up as we were obviously keeping the staff from closing. That, unfortunately, is a metaphor for the meal. What is supposed to be a fun, at your own pace, meal was hurried along by an overeager waitress. Also, I’m sure there are people out there who relish the cooked short rib scrapings, but it was like trying to eat a beef flavored rubber band. Needless to say, next time I want Korean bbq, I’ll refuse the staff’s help and let them keep the bone scrapings for themselves.