As much as I love the Indy 500, the race is exhausting. Even with a ride, it’s a schlep to and from the track, the crowds are disgustingly huge, and doing all this after consuming a number of adult beverages can be a real challenge. Thankfully the patron saint of , Mrs. Mary LaBuz, has a hearty meatloaf waiting at the end of the race.

Last year, while we were all enjoying a helping of meatloaf, Eric Jesse, my old fraternity brother, said that he could make a better meatloaf than Mrs. LaBuz. Even though it was said in jest, the gauntlet had been thrown down. Fast forwarding to Memorial Day 2009, it was time for the epic meatloaf cook-off between LaBuz and Jesse.

It’s a simple premise, but I would say that Mrs. LaBuz has the odds stacked in her favor. Regardless, Eric’s meatloaf looked pretty good in the formative stage. 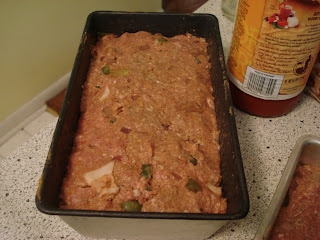 You can’t help but notice the rough chop of the vegetables, but the recipe is much more telling.

Green peppers (one)
Onions (half)
Bacon

The bacon is cut into 1/2 inch strips, while the green pepper and
onion are chopped and sautéed for a bit. Everything is hand mixed and and then formed into the loaf pan. Bake at 350 for 1 1/4 to 1 1/2 hours, then serve.

I love the ambiguity of this recipe. I asked Eric if he had any exact measurements for his recipe, but like most family recipes, Eric said he just eyes everything.


Not only did Mrs. LaBuz’s meatloaf look much different than Eric’s 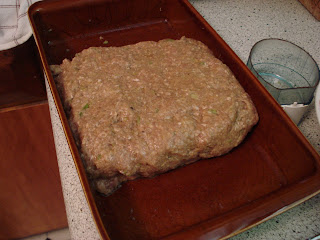 Her recipe had a number of start contrasts as well.

Combine egg, milk and pour over chopped bread - soak for a few minutes
mix remaining ingredients and then put soaked bread mixture - hand
stir until all ingredients are well mixed
Bake 375 1 1/4 hr. - drain off any juice at 1 hour and continue to bake.

Not having eaten much “traditional” meatloaf growing up, I was surprised to see how bread was used each recipe. While Eric used the more traditional breadcrumbs, Mrs. LaBuz had the odd tactic of soaking chopped brad in eggs and milk. I also thought it was funny that Eric used Anchovies in his recipes, while Mrs. LaBuz used Worcestershire sauce, a condiment known for anchovies.

I order to keep the identity of each meatloaf a secret, we, the judges, were served samples of meatloaf without seeing them still in the pan. 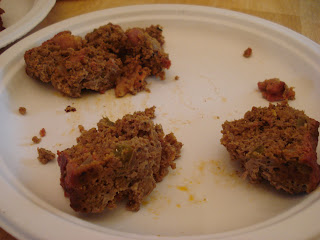 With the first sample, I was impressed with the flavor of the meatloaf. I really enjoyed the bold flavors and the visible chunks of vegetables. The only problem was that I could immediately tell that this batch was Eric’s. Not only did the meat have a slightly darker color, but the roughly chopped vegetables were a dead give away.

The second sample of meatloaf had a slightly mealier appearance. 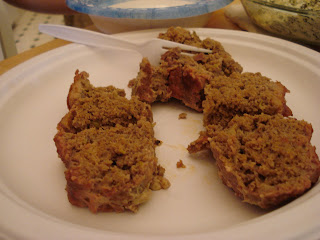 With the first bite, an idea of a mealy texture vanished. This meatloaf was brimming with moisture, almost to a fault. I keep thinking I was eating an underdone sample of ground beef. Granted, the moisture was a selling point for many people, and I can’t fault Mrs. LaBuz for the flavor, as it was well seasoned and delightful.

In the end, between our panel of three judges, we arrived at a decision. After getting everyone in the kitchen, we announced that by a 2-1 decision, Mrs. Mary LaBuz was the winner. Needless to say there was some noise from the competition. Mostly, shouts of “I used bacon! How could I have lost?” Who knows, maybe there will be another meatloaf cook-off next year. I’ll have to bring my family’s weird version of meatloaf to the table.