After a great lunch at Bistrot Du Coin, I convinced my friend & capital city chauffeur Lisa to meet me at a restaurant I’ve always wanted to try, Vidalia. 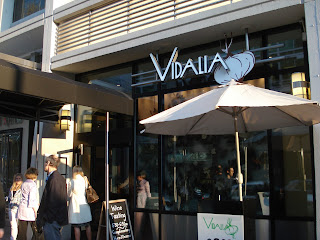 I’ve always been interested in Vidalia because of it’s self described American cuisine with a Southern accent. Now I finally had the opportunity to sample chef Jeffrey Buben’s fares.

Dinner at Vidalia started off with a small selection of amuse bouche. 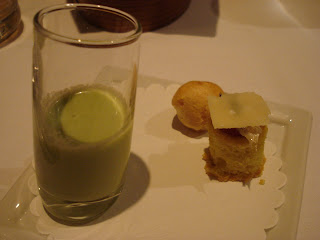 A shot of cucumber soup, a cheese puff, and a piece of olive oil cake make up an interesting start to the meal, and frankly a bit of a disappointing one. The cucumber soup was far too salty and would have been much better served cold instead of the room temperature that we were given. The cheese puff was less than memorable and the olive oil cake had too much of a sweet and lingering aftertaste. Not exactly an auspicious beginning for the meal.

Soon after the amuse bouche was cleared, we were presented with our appetizer. 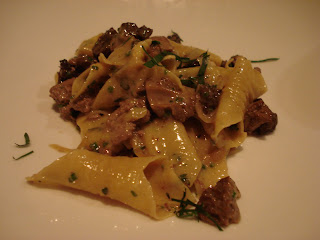 I was excited about this dish of homemade garganelli because I always enjoy homemade pasta and because the pasta was served with rabbit livers, sage, morel mushrooms and wild ramps. The first bite revealed a fault with the dish. The pasta seemed to be overcooked, something I wasn’t at all expecting. By contrast the sauce and livers were excellent, although I would have preferred a slightly thicker sauce.

For an entree, I decided to skip the trotter and try out the mercer farm rabbit saddle. When the menu describes the dish as bacon, sweetbreads, carrot textures and wild watercress emulsion, I knew I was in for an interesting dish. 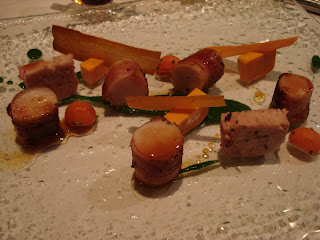 With carrots prepared as chips, sous vide, and as panna cotta, I instinctively reached for the carrot chip first. The chips were delightfully crunch, and a great way to enjoy carrots. The sous vide was deliciously prepared but the panna cotta, while expertly prepared, was an odd and generally unpleasant way to enjoy carrots. As interesting as the carrots were, the three forms of rabbit were the stars of the plate. The rabbit loin wrapped in bacon was delectable, fully infused with bacon flavor, and nicely complimented by the drizzling of rabbit jus. The sweetbreads, served in the form of a terrine, were not to be outshined as they were just as meaty and delicious as the loin in bacon. Even though it halfway complimented the loin, I couldn’t see a reason for including the smear of green that was the watercress puree

After the entrees, I convinced Lisa that we should try cheese for desert in lieu of something sweet. 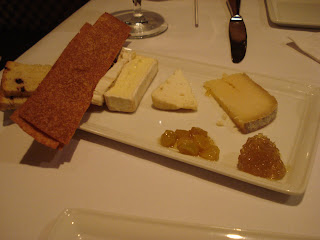 Working left to right, we have pecorino toscano stagionato, a sheep’s cheese from Italy, queso de aracena, a goat cheese from Spain, and lastly a Nancy’s Hudson valley camembert from New York. All were very nice recommendations from our server, but they left us unprepared for what came next.

Our waitress arrived with a four tiered tray full of petir-fours. I was encouraged to choose more than one and selected a homemade marshmallow, a mini red velvet cupcake, and a dark chocolate bon bon. 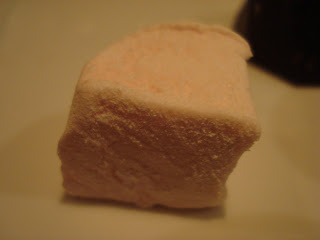 I tried the marshmallow first, and I was surprised to find a slight mint flavor at first, but that was soon overwhelmed by the flavor of bubblegum. 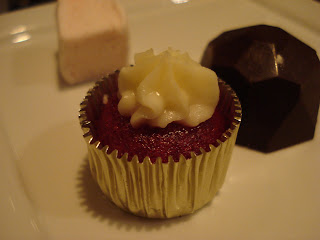 The red velvet cupcake was very dense, but lacked the intangible quality that you find in well made red velvet cakes down South. As far as the chocolate, all I can say is that it was phenomenal.

I had waited six years to try Vidalia, and while I had enjoyed the majority of my meal, it was not worth the wait. However, I can’t blame that on Vidalia, as Buben featured a variety of dishes that challenged the idea of what a dish can be. If I still lived in the district, I would pay another visit to Vidalia, if only to try out the trotter.