I’ll be the first to admit, I’m a fan of the traditional steakhouse. I want deep leather booths, big cuts of meat, hearty wines & spirits, and maybe a cigar afterwards. Vic & Anthony’s is Houston’s take on that idea of a steak house, and the first thing you notice is that everything is Texas big.

For instance the display that greets you at entry. 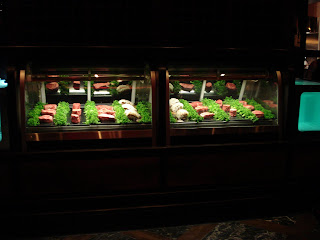 From a distance everything looks normal. However, once you get next to the glass, you’ll see an entirely different scenario. 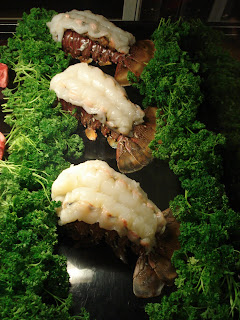 The New Zealand lobster tails are gigantic, nearing the 30 oz range in size, and large enough for two. 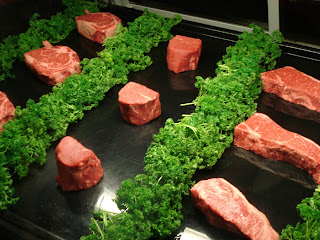 The steaks are a bit more normal, but those bone in ribeyes are nowhere near petite.

Like I said, for me, a good steakhouse has to have good spirits. 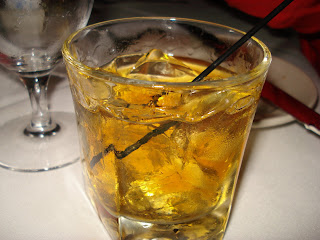 For me, they don’t get much better than Blanton’s.

Starting the meal off on the right foot, I elected to go with the maple roasted quail appetizer. 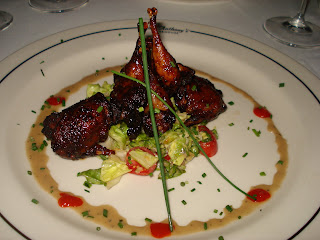 At first I found the meat to be a little overcooked, but that was an isolated incident. I really admire the V & A’s for pairing the maple quail with sriracha, as it is a dynamite combination. The hot and the sweet play off each other extremely well. Once I asked for extre sririacha, I had enough to go with the ample amount of quail. 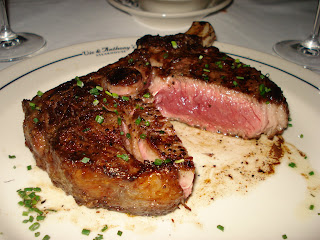 The reason for the odd presentation is that the waiter insisted that everyone cut into their respective steaks to check the doneness. Having requested between medium and medium rare, I was pleased with the results. This ribeye was done well, with a nice char, and just the smallest amount of seasonings, the true flavor of the beef was able to shine through. The only odd thing about the bonein ribeye is that it isn’t on the menu; the three seperate times I’ve been here, it has been a special.

Of course with a large party, we had to have a few sides. 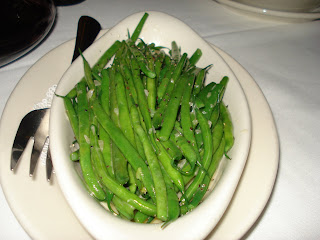 The haricort vert were fresh and had a nice, crisp bite to them. Of course it never hurts when something is coated in butter and sauteed shallots.

Our second side was the potatoes lyonaisse 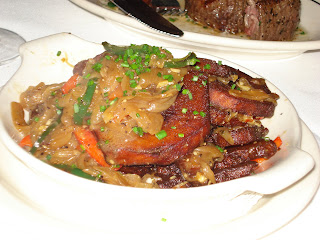 Somehow, this dish managed to have crispy potatoes with heavily sauteed vegetables. I’m amazed that the potatoes didn’t go soggy. Crispness aside, these potatoes were a top knotch side.

While this meal wasn’t perfect so far, there always has to be a rotten apple to spoil the bunch. In this case, that rotten piece of fruit was the cheesecake. 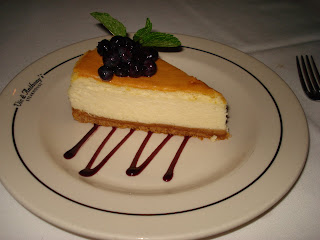 Bland, no rich flavor, no real density of a New York cheesecake, this tasted like they had bought a Sam’s club cheesecake and tried to pass it off as their own. To top it all off, the crust was so soggy it was as if someone had poured water on the plate.

I hate to leave a restaurant on a bad note, but I was shocked when I told the waiter how bad the cheesecake was and he bussed it away. The shocking thing is that it was still on the bill. I expect better from a high end steakhouse than to charge me for a cheesecake I sent back. That little incident soured what was really an otherwise pleasant meal. I might have to find another steakhouse to visit next time I’m in Houston.