Being back in DC, I made a point of getting in touch with old friends, and one of those friends was Drew. Always on the cutting edge of the restaurant scene, I knew that Drew would have a place he was looking to try out, and that Friday was no exception. Potenza was his recommendation, an Italian place that was brand new to the Washington scene.

Before we were seated, I could tell this place was new. The bar scene was packed to the brim and there seemed to be enough people on the waitstaff for every patron to enjoy personal service. It’s a shame their uniforms made them look like ball boys for Italy’s futbol team.

After we snaked through the restaurant to our table, we were given the usual baskets of assorted breads and a olive oil dip. 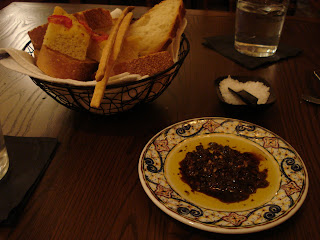 Nothing too special here, just a nice mixture of olive oil, garlic, herbs, & balsamic vinegar. I was much more interested in the first of our appetizers. 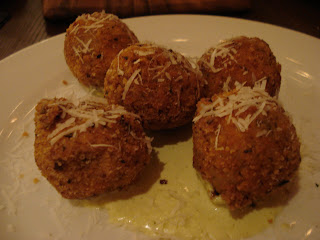 I’m always curious when I see arancini on a menu. Every holiday, my sister and I try to ameliorate our arincini recipe, and we can never find that missing ingredient. I was hoping the wild boar sausage would give me a few clues for our search. 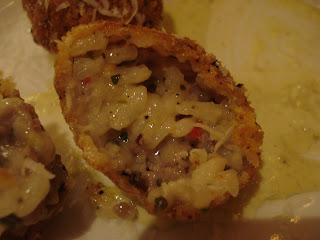 Taking a look at cross section, I was struggling to see any boar sausage. Even though I couldn’t see any of the wild boar, the flavor certainly permeated every one of the risotto balls. It may not be the missing link, but the arancini at Potenza are a worthwhile appetizer.

I honestly couldn’t help myself. As anyone who knows me will agree, I can’t resist trying house cured meats, and it just so happened that Potenza had three on their menu. 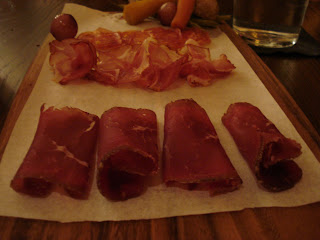 From front to back, there is bresaola, capicollo, and “spicy” sopressata. The three salumi aren’t too bad for a restaurant’s first try. The bresaola was frankly a little bland, and carried a slighty convenience store jerky aftertaste, not something you look for in your finer cured meats. The capicollo was a much better product, and it had me tasting cloves and allspice. The sopressata was my favorite of the three, as it really was spicy but it had to the good graces to let the flavor of the pork shine through.

Maybe I was just hung up on the idea of wild boar sausage, but my entree was the pappardelle al cinghiale. 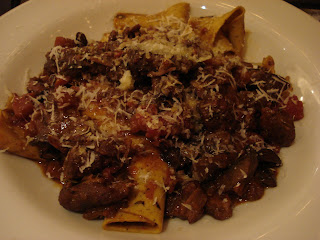 Wild boar ragu, portabello mushrooms, both over house made peppercorn pappardelle makes up quite an entree. Whatever boar I was missing in the arincini was more than made up for by the pappardelle. The pork was perfectly cooked and fork tender, and was complimented by a tasty pappardelle that was literally bursting with peppercorns. In fact, my only compliant with the dish was that the papperdelle was incredibly thick and I often had to use a knife to cut off a bite sized piece.

Bypassing any sort of sweets for desert, I convinced Drew to join me for a trio of cheeses. 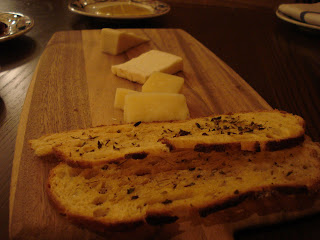 Front to back, we have a pecorino grand cru, a taleggio, and a pecorino boschetto with truffles. The first two cheeses were both excellent choices with the pecorino being exceptionally smooth and creamy. Unfortunately, the truffled pecorino suffered from a heavy hand with the truffles as it was too earthy to even enjoy.

As much as I enjoyed the food at Potenza, it suffered a number of shortcomings. With so many people on the waitstaff, I had more than one instance where I couldn’t find a waiter to save my life. Even with a new restaurant, it’s unacceptable to have to ask for water more than once, much less three times. I can only hope that a few weeks of being open will iron out the kinks, because I enjoyed the majority of the food at Potenza. Hopefully the rest of the staff will catch up with the kitchen.