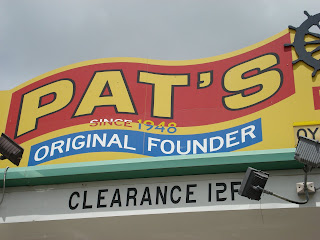 Once again, here I was on I-10 making my way to Houston for Easter weekend. When you’re making a trip like that you need a good stopping point. For my trips to Atlanta, that stopping point is Tuscaloosa. Trips to Houston call for stopping in Henderson, Louisiana, dead in the heart of cajun country. This little hamlet on the Atchafalaya basin features a family favorite, Pat’s Fisherman’s Wharf.

Started by Pat Houval over a half century ago, Pat’s is the best way to get a taste of the gulf and of the swamps. 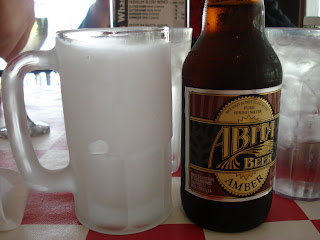 Like any place in Lousiana, I like my meals with a good Abita, although it is a little suspicious that this Abita Springs beer is listed as an import.

Enough about beer, it’s time to get to the meat of the meal. 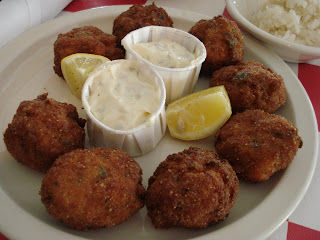 These are crawfish bouletttes, but if you’ve been reading my previous posts, you’ll notice they bear a striking resemblance to calas. 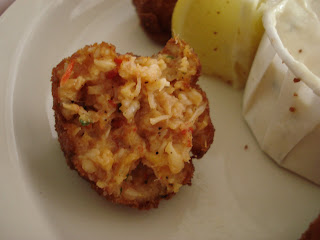 A look inside one tells the same story. Regardless of nomenclature, these are a delicious treat. Very meaty, and well spiced, but you can tell someone had a heavy hand with the cayenne pepper, but who’s complaining?

Next up on this crawfish smorgasbord was the crawfish bisque 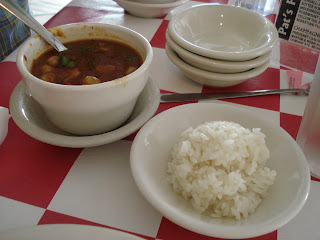 Once everything is combined, you can get a closer look at this dish. 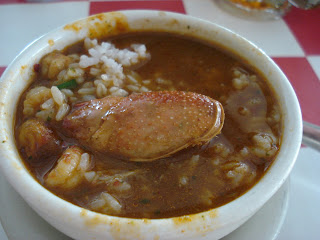 You can see the little droplets of crawfish fat shimmering on the surface, but even with that richness, this really came across as almost a gumbo without a roux or file powder. This dish also bore, what I noticed to be a Pat’s trademark, a heavy hand with the cayenne. For those of you that are wondering, that crawfish thorax did serve a purpose; it was stuffed with spiced crawfish meat and rice, delicious. 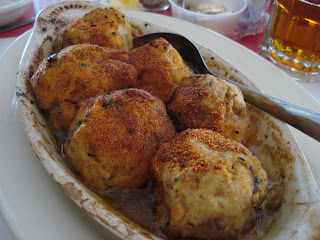 If you’re like me, you’re struggling to see the mushroom. 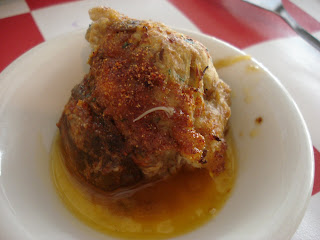 Here you can see the hugely disproportional ratio of crab to mushroom. In fact this dish was really nothing more than a delivery system for big lumps of crabmeat and butter, and I wish I had thought of it first. Even though this dish was a ruined shirt just waiting to happen, it was a wonderful, heart stopping treat.

Eventually, our run of appetizers ended, and next came the crawfish dinner. 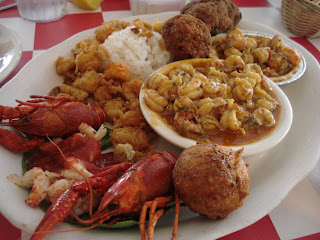 First up was the crawfish stuffed pepper. 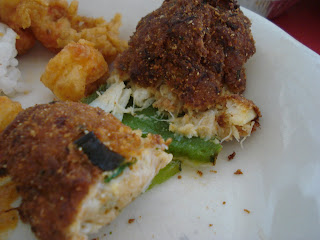 Much like the crab stuffed mushroom, the pepper was merely a vehicle for meat delivery. That being said, this was a well done little dish. Fried in fish fry mix, this was still spicy, and the pepper was crisp with a nice bite. 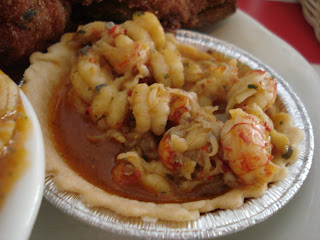 Next the crawfish pie, I was a little miffed to find it was nothing more than crawfish etouffe sans the rice. Granted the flaky pie crust added a nice contrast in texture, I still felt that the crawfish pie was a half-assed effort. 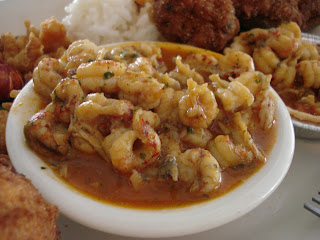 Even though the crawfish pie and etouffee were one and the same, it is still a spicy little dish. The rest of the crawfish dinner was really just an afterthought. Sure the boiled and fried crawfish tails were nice, but there was nothing to make them stand out.

That should have been the end of the review, but it just so happened that we stopped at Pat’s on the way back to Jackson. With a seat on the porch overlooking the water, we took in a second round of Pat’s.

Having enjoyed too much crawfish last time, I opted for some different dishes. For a start, here is Pat’s turtle soup. 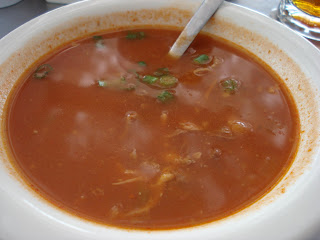 This is a very nice tomato based soup. 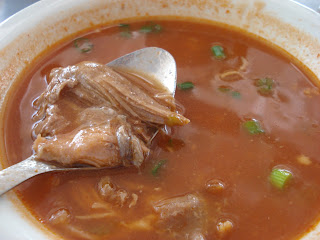 As you can see this is a very meaty dish. Unfortunately, a fair amount of this meat was tough, dark meat. This dish bears a slight resemblance to the turtle soup at Commander’s Palace, but the two are extremely different takes on the idea. While Pat’s turtle soup is a very rustic, meaty soup that is a true representation of country cajun cooking, the turtle soup at Commander’s Palace is a very smooth, unctuous dish that is a perfect example of creole cooking. It’s amazing the dichotomy that exists in southern Louisiana cuisine.

Needing something completely different for an entree, I opted for the frog legs. 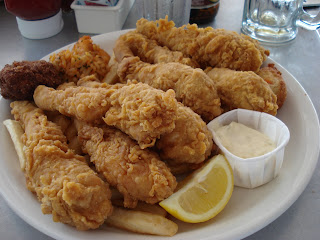 I was a little surprised when this came out. The last time I had frog legs was 5 or 6 years ago at Margaritaville in the French Quarter. Then the legs were a tiny afterthought on a platter of fried fare, here these are the real thing. Taking the first bite, you can’t help but appreciate the contrast of the golden, crisp batter and the tender meat inside. I was surprised at how similar the meat was to a flaky, white fish. 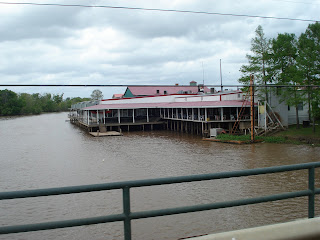 Leaving Pat’s, you can get a sense that this really is a local’s only place. Only a select few know to take the long road off the interstate, but those who do are rewarded with a glimpse into the spicy, delicious world of cajun cooking.

You're right to always stop for a meal in Henderson. How such a small town (pop. about 1,000, last I checked) can have so many of the best restaurants in Louisiana -- in Louisiana -- I can't understand. I don't know if they're all still there, but in addition to Pat's, there is (or used to be) Las's (on the main road from the freeway to the levee), Pat's Waterfront (Pat Huval's earlier restaurant; his ex-wife got it in the divorce, I heard), and my favourite, Robin's (with a French pronunciation; also on the main road). Their seafood dressing -- whatever was left over the day before, with rice -- was always my favourite dish, no matter what was in it. My Cajun friends from down the bayou thought I was crazy, but whomp, they it is. Cha, bé, 'at ain' no dinna! Yeah, it is.

Oh, and there was another restaurant, right by the freeway exit, a place we'd never heard of before called Landry's. It was never quite as good as the others in town, but it had the best location, and I understand those people did something extraordinary with their business.