After a filling meal at Pat’s, we arrived into Houston a little later than we expected. Needing a place for dinner, I pulled out a insert from an old Houston Chronicle that listed the best of Houston. Trying to decide between Thai and Korean, we settled on Thai for that evening.

Pulling up to Nidda Thai, you can’t help but be struck by it’s neighboring stores. 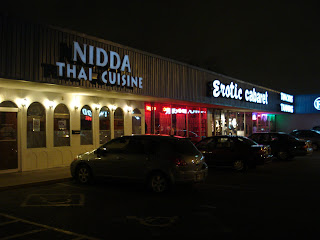 Once the four of us were seated, we got right down to the business of ordering. The first dish to arrive was the surprised pork. 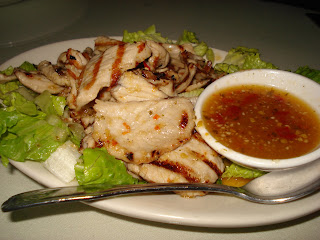 Described as grilled strips of meat tossed in a spicy Thai glaze, I was wondering where the surprise was. I soon found that the surprise was dry pork. Even though it had a nice flavor and the accompanying sauce was slightly spicy, the pork itself was too dry to really enjoy. I could go for a little more of that sauce though.

The next appetizer was the siamese shrimps. 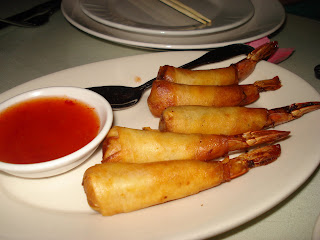 Nothing too special here, just a well fried shrimp wonton. Even though the menu says they are made with green onions, I couldn’t find any to save my life.

Third in our quartet of appetizers was the crispy spring rolls. 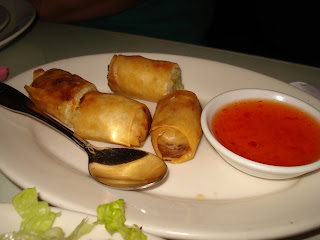 Stuffed with tofu, vegetables and crystal noodles. these were a great starter to the meal. I’m so used to either doughy eggs rolls or greasy spring rolls, I was happily surprised to find that these were stuffed to the gills but not at all greasy. The spring rolls are a top notch appetizer, although I prefer a little bit of sriracha to the accompanying sweet & sour sauce.

Fourth and finally were the steamed dumplings. 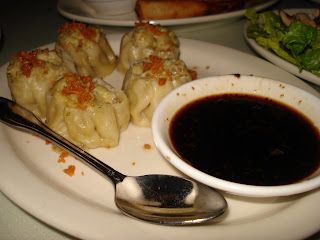 These dumplings were a departure from the normal, mainly because they were chicken instead of pork dumplings. Unfortunately, they tasted like they came from Trader Joe’s. Granted, Trader Joe’s sells a pretty good frozen dumpling, but I expect better from this sort of Thai restaurant.

With all of our appetizers bused away, we were soon assaulted by the results of our typical overzealous ordering. 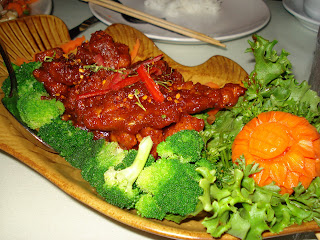 Here was my pick for a table entree, fish in the red sea. Made with red snapper, the fish was literally swimming in a slightly clumpy, but extremely flavorful sauce. The fish was extremely well cooked and the sauce was the perfect compliment, and best of all the heat was a resilient, lingering heat. The dish was one of the highlights of the meal.

After the fish in the red sea arrived, the next dish was the ginger lover’s beef. 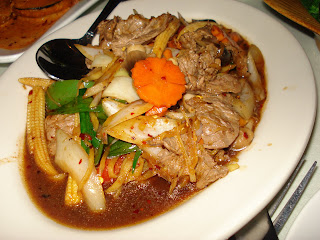 Oddly the beef in this dish was hard to find and less than spectacular. The real feature to this dish was the sauce. Pleasantly pungent, I found the best way to enjoy this dish was to spoon the sauce and a few of the veggies over rice.

Third in our string of entrees was the restaurant’s trump card, the chu chee eggplant. 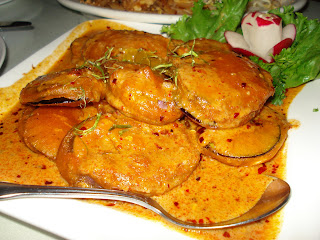 In this dish, fried eggplant is covered with a red curry and kaffir lime leaves sauce. With my first bite, I couldn’t help but think this was fried with rice flour. The delicate crunch was too similar to the flavor of Thai fried chicken. The curry sauce carried a very nice heat, and I loved the varying textures with the smooth curry, the crispy eggplant, and the creamy eggplant interior. I’m not sure if I would rank this as “possibly one of the best Thai dishes in the world”, but the Houston Chronicle was right in singling out this dish.

Next to last was the garlic pepper shrimp 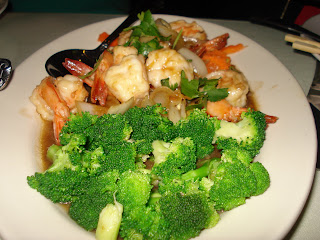 Quite frankly this wasn’t a very memorable dish. I did enjoy the pungent ginger flavor and slight heat of the sauce. However, there was not much else that would stick out among the plethora of Thai shrimp dishes.

The last dish was the real star of the show; the chicken pad thai. 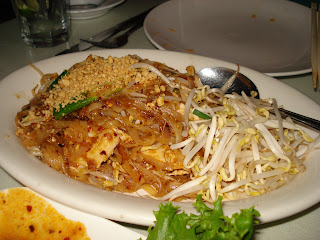 Per my instructions, the kitchen had turned the heat on this dish all the way to 11, and it showed. Everything about this dish represents what pad thai should be. The noodles were perfectly cooked, the veggies crisp, and everything was extremely spicy but flavorful.

If I were a local to Houston, Nidda Thai would be my first choice for Thai takeout, but I’m not sure how often I would schlep there for a sit down dinner. Some of the dishes were outstanding and they really know how to make a delicious sauce, but too many things were bordering on mediocrity to make this a repeat restaurant. There are just too many restaurants in Houston for Nidda Thai to be on the top of my return list.

Wow. The food is really making me drool here. This will definitely a must-visit place in our Chicago dating getaway destinations! thanks for the post!

I'll will definitely look for this restaurant in our Houston dating vacation after Chicago! I think Houston goes far better than Chicago!