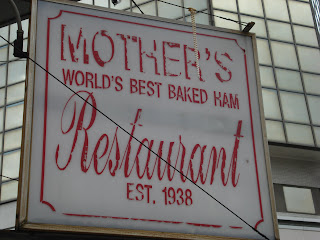 There’s no shortage of landmark restaurants in New Orleans. Nor is there a shortage of trademark dishes. Mother’s on Poydras fits the bill for both.

Even though their sign says “world’s best baked ham”, for me, Mother’s is synonymous with debris. For the uneducated, debris is the term for the little bits of meat that fall off a roast beef, and it just so happened that I was going to get my full share of debris that Saturday morning.

Usually, the first thing you notice about Mother’s is the line of people out the door. Being there at 7:30, there wasn’t a line to be seen, so I was able to walk right past the steamer trays and place my order. 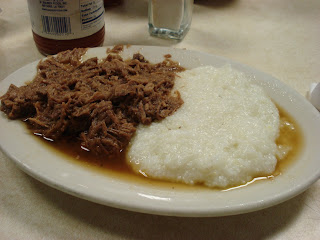 The infamous debris, served with grits. 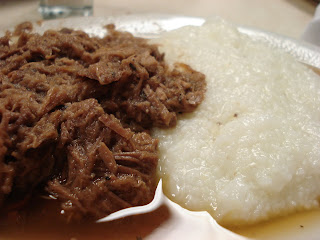 With a closer look, you can that debris is really just slow cooked and shredded beef. As simple as it is, it’s dynamite with grits. Once you mix the debris, the au jus, and the grits together, its a symphony of artery clogging flavor that makes you glad you got up early.

The Ferdi sandwich is Mother’s trademark sandwich. Its been written up in Esquire, GQ, and a plethora of food & travel magazines. I’ve even seen people try and copy it around the country. 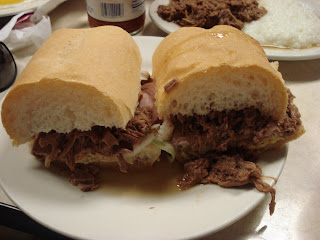 Sort of anticlimactic isn’t it? In essence, the Ferdi is really nothing more than some roast beef, baked ham and dressings, but the Ferdi is more than the sum of its parts. 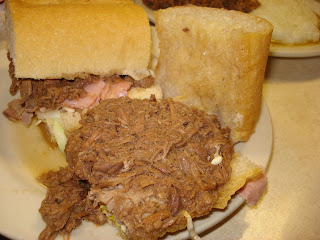 It’s messy and delicious. The sweetness of the ham, the beefy flavor of the debris, and the subtle notes of the pickles, mayo, lettuce and the all the other trimmings work in perfect harmony.

As much as I might enjoy Mother’s and it’s Ferdi sandwich, there are better po-boys to be found in New Orleans. It’s just nice to know that the tourist trap can really dish up a good meal. Let the first timers to Nola be sucked into the allure of Mother’s, it just leaves more for the rest of us.