Sunday night was cold and rainy in Washington, and I needed something hearty to ward off the weather. Out of nowhere, I remember another collegiate favorite, Martin’s Tavern in Georgetown, and after catching a cab from the hotel, I was at the door of the old bar. 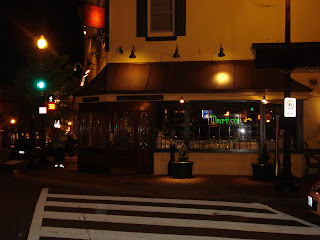 It may not look like much from the outside, but Martin’s is full of DC history. Aside from being the oldest family owned tavern in the district, Martin’s has been frequented by a number of politicos over the years from LBJ to Nixon. Legend has it that Kennedy proposed to Jackie in a booth by the bar.

All history aside, I was there for some filling food, and Martin’s had just the thing. 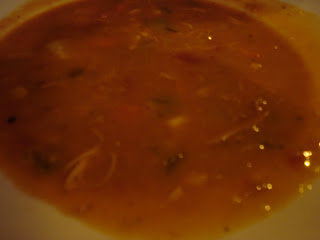 Try as I might, I could not get a good picture of Martin’s Brunswick stew. Like my earlier version at Swallow in the Hollow, this was your typical tomato based vegetable soup, but this one had more character. Hearty and full of butterbeans, corn, potatoes, carrots, chicken, and tomatoes, this was a formidable soup once I added enough black pepper.

As if the Brunswick stew wasn’t enough, I decided to get the house special hot brown for an entrée. 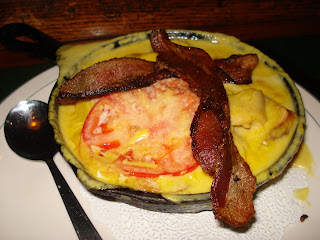 I was spoiled by my first hot brown as I had my first one in Louisville, but Martin’s does a fine job for being on the east coast. When it arrived to my table, I couldn’t help but be overwhelmed by the smell of fresh bacon and bubbling cheese. The hot brown really is a simple concept, essentially bread, sliced turkey, cheese and bacon, but it’s a deadly combination. In fact towards the end, I found myself unable to handle all of its cheesy goodness.

While waiting on my check, I was able to take in the Sunday night crowd for Martin. Chock full of locals and political chatter, it was something I both missed and hated about DC, but that’s beside the point. Martin’s may not have the flash of some other DC restaurants, but it’s a Georgetown institution and one I hope will stay that way.

In DC, no place to go but Martin's. It's an institution for a reason. Fabulous