Last Friday, per the suggestion of my Uncle, we schlepped back down Westheimer to Mark’s Restaurant. Mark’s is a bit of an oddity, mainly for its location. It’s not that Mark’s is in a bad part of town, it’s that the restaurant is inside an old church. Even though it had been gutted, there are remnants of the church everywhere in the restaurant. From the pew just inside the door to the room for the organ being made into a wine cellar 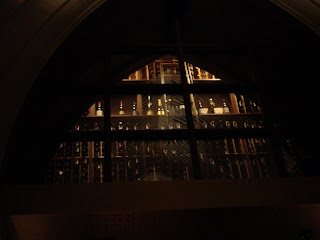 With such an interesting setting, I hoped the food at Mark’s would follow suit. I can certainly say that their menu was stunning. Featuring a variety of local and organic ingredients, the menu was bolstered even more by the extremely knowledgeable, if a tad condescending, waitstaff.

Since that evening had so many fine appetizers available, I decided to forgo the usual appetizer & entree combination and sample a variety of appetizers instead. My first appetizers was a menu staple, the seared foie gras and roasted quail. 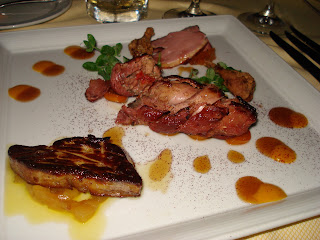 For such a seemingly odd coupling, this pair worked extremely well. To begin, the quail was wrapped in serrano ham which had a fantastic amount of flavor penetration. Every bite of the quail was amplified by the saltiness of the serrano. The smattering of sauce around the dish worked equally well with the quail/serrano combination, providing a slight sweetness to cut through the salt. The seared foie gras seemed to be an odd addition to the meal. Off on it’s own and perched on a bed of fruit and sauces, it really seemed to be an ancillary item to the quail. However, I soon found that the foie gras offered another bit of contrast to the quail which brought out the best in both items.

Second in my trio of appetizers was one of the specials, a soft shell crab. 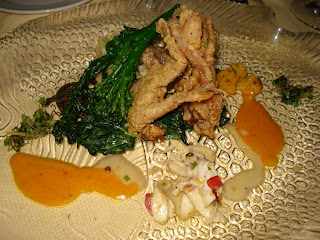 Served with a small portion of lemon risotto, this was the weakest appetizer of the three. While I was a little apprehensive about the lemon risotto, I was pleasantly surprised to find it to be a light lemon flavor and nowhere near overbearing. In contrast, the soft shell crab was caked in a dense batter that tasted of raw flour. Coincedentally, another person in my party ordered the soft shell but in the entree size. We were shocked to find that the appetizer and entree portion were the exact same size, I can’t figure out where the price difference came from.

With the round of entrees came my final appetizer, 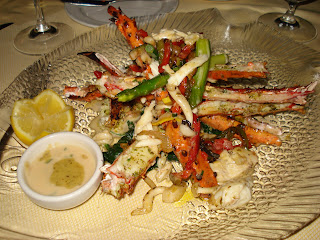 Fresh, roasted king crab legs. I’ll admit the only reason I ordered this is because I had never tasted fresh king crab legs. Every other time I’ve seen them, they have been frozen in transit, so this was a treat. What a treat it was, the meat was flaky, tender, and beyond succulent, and was only further complimented by the decadent lemon butter sauce. Not only were these crab legs roasted perfectly, there was an abundance of them, far more than I expected in an appetizer portion.

It’s a shame that the phrase has become some hackneyed, but for this meal, two out of three ain’t bad. Even with the slight letdown of the soft shell crab, I was more than pleased with Mark’s Restaurant. It has everything you should look for in a restaurant, a great atmosphere, a knowledgeable staff, excellent local fare, and blanton’s at the bar.