After our success with Nidda Thai, we decided to take the Houston Chronicle’s advice again. This time, I decided we should go and enjoy a little Korean bar-b-que in the form of Korea Garden. 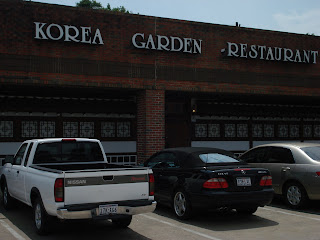 There seems to be a trend with Asian restaurants, they all have to be situated in a rather dingy strip mall, and Korea Garden was no exception. However, once inside, I found it to be a nice respite from the low rent latino surroundings. We were quickly shown to a table and took a look at their menu.

Like with any Asian meal, I had to start out with a sampling of the house dumplings. 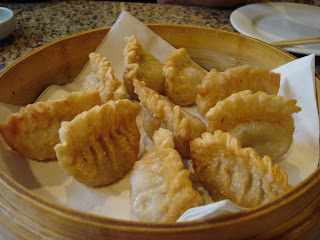 These were unlike most Asian dumplings I’ve had. They were extremely fresh and had a thick doughy wrapper. Inside was a mixture of sweet green onions and gingered pork. 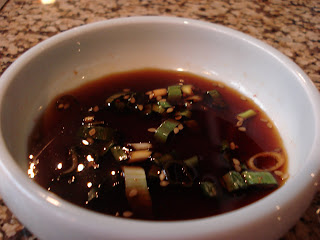 Combined with the excellent dipping sauce, these were the standout of the meal. Not only was there a large quantity to the order, the quality was outstanding.

As soon as we started in on the dumplings, our second appetizer arrived: the oyster pancake. 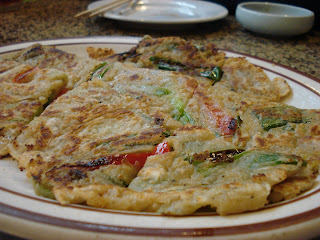 I wasn’t quite sure what to expect with this dish, but the first bite revealed a rather pleasant appetizer. Full of green onion and red pepper, the vegetables really dominated this dish. Unfortunately, the oysters in the oyster pancake were practically non-existent. There was dough and veggies aplenty, but without any real evidence of oysters, I’m not sure why its called an oyster pancake.

Our third appetizer was a real departure from the norm. 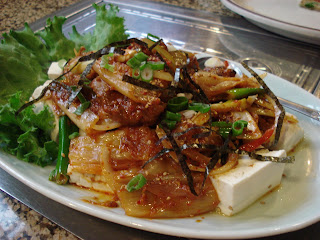 Jae-jook-bokgeum was the name of this dish. It was described as a stir fry of spicy marinated pork, kimchee, and tofu. Once I started into this dish, I was hit with mixed feelings. The dish had a lingering, pleasant spiciness but the pork was just mushy. The kimchee was well flavoured, but the tofu wasn’t even incorporated into the dish. It was as if the kitchen had just slopped the stir fry onto the tofu. Regardless of their intentions, I was thoroughly disappointed in this dish.

With our trio of appetizers finished and bussed away, we got down to the real reason for coming to Korea Garden: the bulgogi. 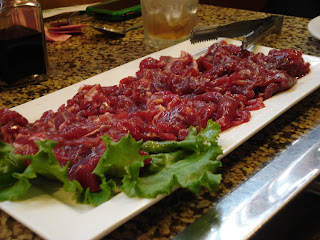 I love a table with a twist. Instead of a big teppanyaki griddle, we had a blazing hot grill grate. 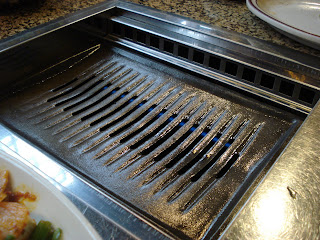 With our plate of beef ready, I set to grilling everything. 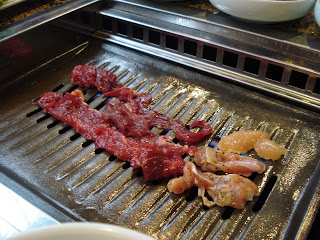 Soon enough, I had the bulgogi off the grill and onto my plate. This was a delicious way to have a group meal. The beef was well marinated and expertly flavored. The subtle flavors of Korean cuisine still escape me, but the bulgogi was more than enjoyable.

Of course, we had the full compliment of bulgogi sides. 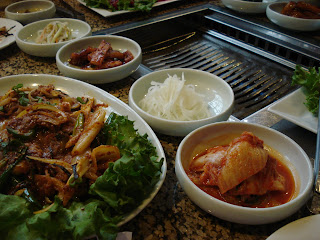 Bean sprouts, fish cake, picked radish and kimchee on one side. 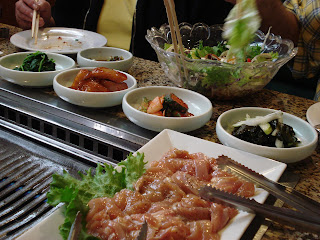 Potatoes, spinach, and other pickled and fresh veggies on the other side.

After all the meat had been grilled and our leftovers boxed up, I had to pause and think about how Korea Garden had been. While the pork and kimchee stir fry had been disappointing, the bulgogi had been outstanding, and that was really the important thing. We had come to Korea Garden looking for bulgogi, and we had found it. Hopefully I can pay Korea Garden another visit the next time I’m in Houston.

That pork/kimchi dish you have is a common appetizer that Koreans eat while drinking.

It looks like that restaurant did it the right way, because the main purpose of that dish is to separate the different taste of each pork, kimchi, and tofu. You're technically supposed to slice off a piece of tofu, wrap pork and kimchi with it and eat it.
I'll have to try this place some time! definately looks delish!