Being in DC, one thing I couldn’t pass up was Sunday brunch, and after convincing my friend Merry, I caught a cab to Hank’s Oyster Bar.

The first thing you notice about Hank’s is its size. I can’t image there are more than 20 tables in the restaurant, but that is part of its charm. Another feature is the large chalkboard in the middle of the restaurant that has their list of fresh oysters and daily specials. I was able to study these little details while waiting on Merry, but once she showed up, we were able to get a seat and get down to brunch.

I appreciate when a restaurant doesn’t take itself too seriously. 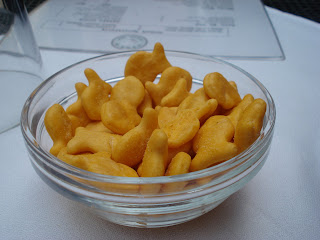 After all, an oyster bar would serve fish, so why not goldfish?

Starting our spree of seafood was the shrimp cocktail. 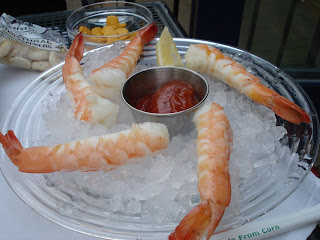 Even though these shrimp were extremely fresh and crisp, I couldn’t help but be miffed by how straight they were. I’m not sure how Hank’s kept them from curling, but it’s a little disconcerting, almost as disconcerting as their stinginess with the horseradish.

It would be inappropriate not to enjoy some of the bar’s namesake. 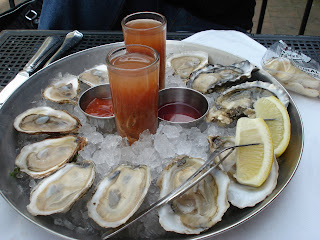 To begin, Merry and I had two oyster shooters in the middle. Essentially a shot of sake with an oyster and some bloody mary mix, neither of us could see the benefit to this. The shooter was too coarse to enjoy and seemed a waste of a good oyster. Getting to the rest of the oysters, starting with ones with the lemons, we have Rappahannock, cape may salts, diamas d’isle, Conway cup, beau soleil, and Olympic miyagi. It’s nice to have a variety, but unfortunately, not all oysters are created equal. The Rappahannock were delicious and briney, where as the cape may lacked any real flavor. My far and away favorite was the Conway cup; small briney, and delicious, it had all the features I look for in an oyster.


A dozen oysters on the half shell just wouldn’t be enough for the two of us. 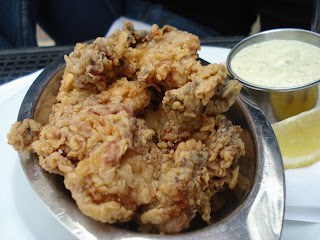 So why not an order of fried oysters? As much as I enjoyed the freshly shucked oysters, these fried oysters were sublime. With just the right amount of crunch and salt, these are what fried oysters should be.

Breaking our trend of seafood, Merry insisted we try the beets. 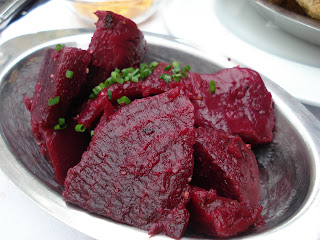 The best part about these beets is the picture. I honestly couldn’t see the point, they were bland and lacked any real texture. Merry insisted they were delicious, so delicious she felt the need to spill them down her shirt. Even though I love to try different foods, I’ll leave beets to those who appreciate them.

Aside from the oysters, there was one thing I was looking forward to at Hank’s 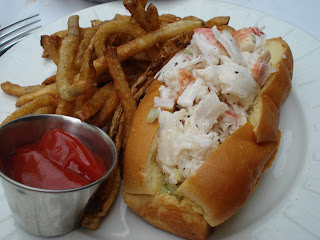 The lobster roll. Rarely seen in my part of country, the lobster roll at Hank’s is sublime, with a buttery and crisp roll that provides a perfect contrast to the rich and creamy lobster. It may be a simple dish with just lobster, mayo, & celery on a bun with fries, but the lobster roll is arguably the best dish at Hank’s

From the best dish, I made the mistake of trying the absolute worst dish, the ceviche. 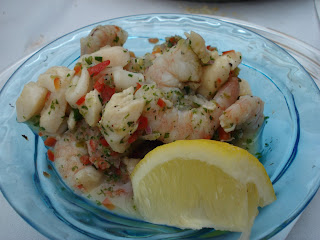 I couldn’t taste anything but cilantro in this dish. Even the different textures of shrimp and calamari were lost in a sea of cilantro. Thankfully our waiter was quick to rectify the situation.

Hoping to end on a high note, we decided to order another dozen oysters and the lobster bisque. 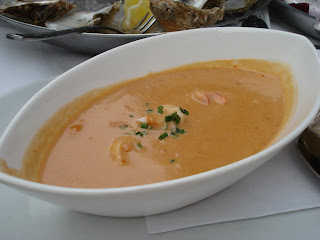 The oysters were delicious again, but the bisque was a delightful way to finish the meal. Extremely creamy and unctuous, my only complaint was the lack of meat, but after the lobster roll, anything short of a full tail would seem like too little meat. I suppose the best endorsement for the dish came in the form of various guttural moans from my brunch partner.

When the food had been cleared and the bill paid, I paused to reflect on our lengthy meal. I felt that we had sampled the majority of Hank’s brunch fare, and come more than satisfied. Forgetting the miserable ceviche, the food was excellent, the service rapt and ready to please, and the company superb; Hank’s Oyster Bar was and will continue to be one of my DC favorites.

I am really interesting when a restaurant is so tasty and have a huge variety where we find ourselves into something that we don't know how to choose. Buy Viagra Viagra