I decided to give the crab claw scapricciatiello appetizer a try. 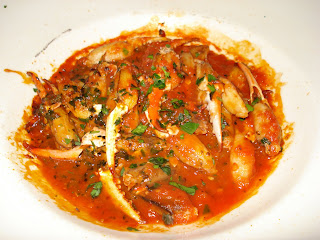 It has some elaborate and rather hooky sounding name on the menu, but what it boils down to is crab claws simmered in tomato sauce. Unfortunately that tomato sauce was as basic as could be, and it was screaming for a little garlic or a few chili flakes. Sadly the crab claws were the highlight of the meal

I realize that veal is a sometimes controversial subject. 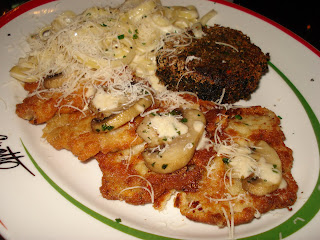 If this is what happens to veal in Grotto, then all calves should run free. This veal kickerillo was an absolute waste. Each little medallion was burnt on the edges and gummy in the middle, and carried a flavor I can best describe as cardboard. The fettucine had obviously been under a heat lamp for ages as the top noodles were dried to a crisp, and the ones underneath had barely enough alfredo to justify their existence. Of course the king of dreck on this plate was the brown and black hockey puck in the middle. I realized that this was supposed to be spinach, which the restaurant thought should be tossed in bread crumbs and fried in year old oil.

Part way through the entrees and avoiding the puddles of water the waiter had spilled on the table, my uncle informed us that Grotto had changed hands a few years ago. Now part of the Landry Signature Group, I could see the distinct pattern. Pesce, Vic & Anthony’s, and Grotto, all Landry restaurants, all sub par in their own special way.