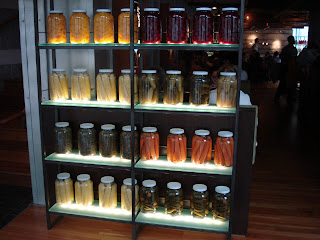 Monday was my last full day in DC, and what better way to start the day than with lunch with my fraternity brother Scott. Being the founder of eatthedistrict.com, Scott knew his way around the District’s restaurant scene and he recommended Founding Farmers.

Situated in the first floor of the IMF building, you can’t help but notice the LEED gold status stickers plastered on the doors. After a quick look at their website, I gather that it essentially means Founding Farmers is 100% carbon neutral and green to a fault. That’s all well and good, but I’m more interested in what they do with their organic goods than how environmentally friendly their building is.

Once we were seated, I was able to really take in the restaurant. With exposed wooden beams and antique bulbs, I couldn’t help but feel like I was in an oddly restored farmhouse. However, the décor was soon forgotten as the appetizer arrived. 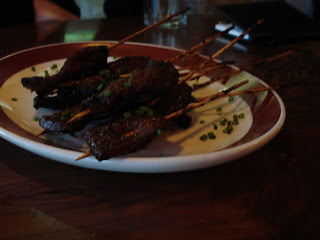 These little delectables are called bacon lollis, and the idea behind them is bacon candied with a cinnamon & brown sugar glaze. 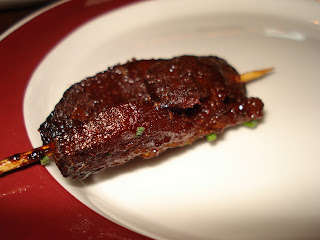 As much as I enjoy the combination of brown sugar and cinnamon, I think the real reason this dish works is because of the Nueske’s bacon. Left to my own devices, I would just serve plain Nueske’s bacon on stick, the real applewood smoked flavor has more depth than anything the cinnamon & brown sugar can add.

Hoping to take advantage of the cold and rainy weather, I had decided to try one of the house signatures. 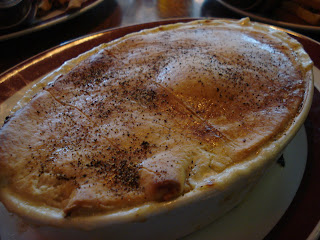 From this point of view, Founding Farmers look like they serve up a pretty nice chicken pot pie. 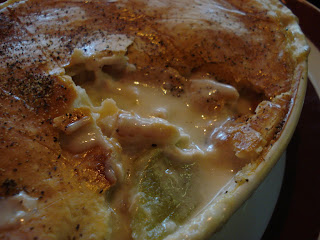 Once I broke the crust it was a different story. The sauce was too thin. When I read rustic chicken pot pie, I was expecting something that would stick to my ribs. Also, there was an odd twist to this dish. Normally I’m complaining about too many peas and not enough chicken in my pot pies, in this instance, I couldn’t find a vegetable to save my life.

When our table had been cleared and the bill paid, I tried to summarize my thoughts on Founding Farmers. I like the concept, there’s nothing wrong with being green and buying local, but I hardly call cheese from Vermont local to DC. In the end, I was let down by subpar service, lackluster food, overpriced bourbon. Who charges $14 for a shot of Blanton’s?