Cooking the Book - Cooking Up A Storm - Natchitoches Meat Pies

After a great night in New Orleans, I needed something to cook the next day. What better food than New Orleans cuisine? Scanning my bookshelves, I came across a book I had picked up the last time I was in Nola: “Cooking Up A Storm”. I had read about “Cooking Up A Storm” in the New York Times, the idea was that people tried to bring together all of the Times Picayune recipes that had been lost during Katrina.

Perusing the book, I stopped on a particular recipe, Natchitoches Meat Pies, courtesy of Mrs. Mary Cloutier. Having always been a fan of meat pies, I decided to give this recipe a shot.

As with any recipe, I made sure to get all of my prep work done, and my mise-en-place ready. 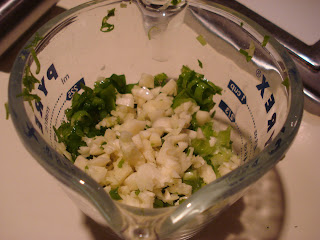 Here are the vegetables of the filling: 1 cup of chopped green onions and 2-3 chopped garlic cloves 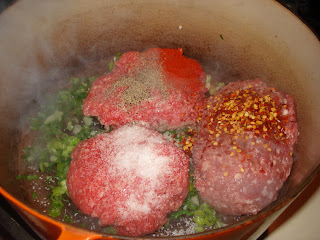 Soon all traces of red were gone 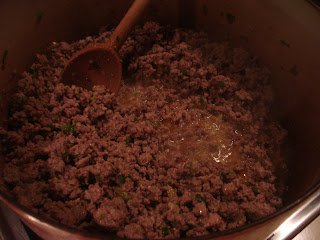 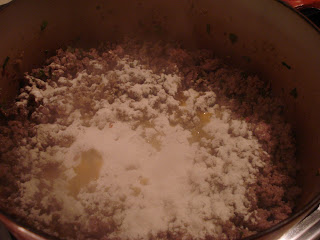 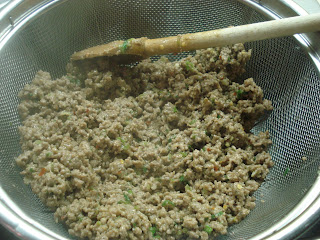 The idea was to let the excess liquid drain, leaving me with filling that won’t soak the pie crust.

While the filling was cooling to room temperature, I set about making the crust. 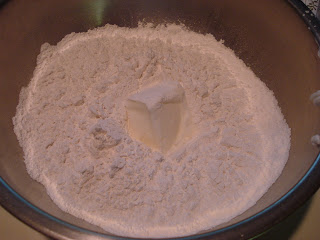 The idea is to use two forks or a pastry cutter to cut the shortening into the flour. Once the shortening pieces are about the size of peas, you’re ready for the next step. I’d show you a picture of the pea sized shortening, but it really looks like a regular bowl of flour. Isn’t pastry fun? 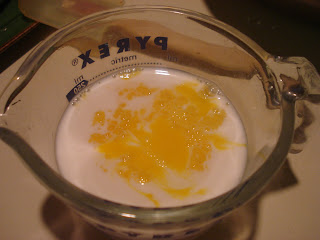 Here are the last components of the crust, ¾ cup of milk and 1 large, beaten egg. Said ingredients are then added to the flour Crisco mixture. 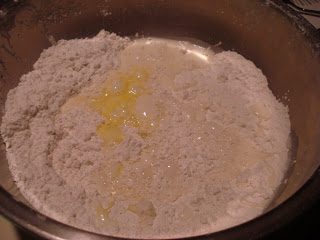 With a small amount of stirring, you arrive at 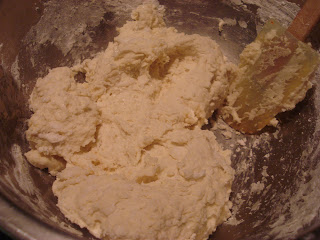 This ball of sticky hell.


Doing my best to follow the recipe, I took a 1/3 or so of the ball and put it on a floured board. 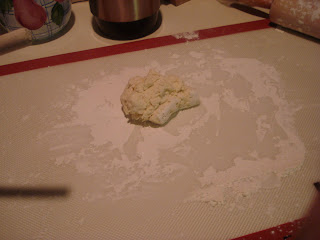 After more liberal applications of flour on my rolling pin and board, I was eventually able to get a consistent thickness. 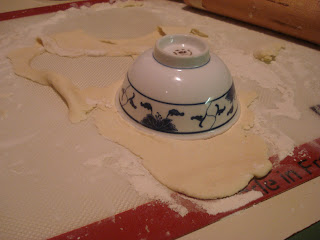 Which I then cut into rounds with my handy soup bowl. 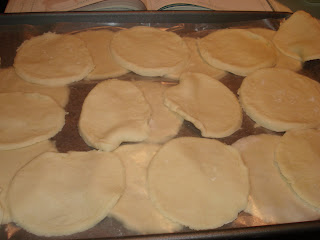 The fruits of my labor, an entire baking tray full of dough circles.

The moment of truth, time to make the meat pies. 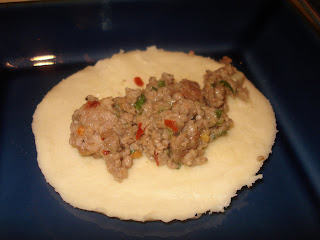 I took a dough cut out and added a small amount of filling. I then wet the edges of the cut out and folded it over, and proceeded to crimp the edges with a fork. Wanting to avoiding any exploding pies when frying, I remembered to prick the top of the pie twice with my fork. 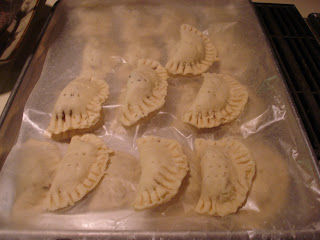 This was just as tedious as it looks, quite possibly even more so.

With the tedium finished, it was time for the fun part, the frying. 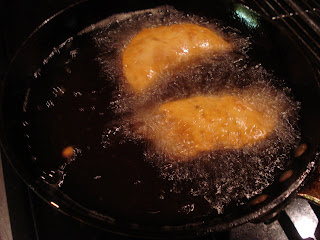 Soon these lifeless white half circles began to take on a delicate golden color. 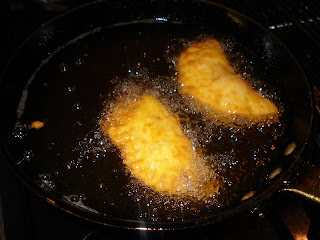 Which resulted in this mountain of fried goodness: 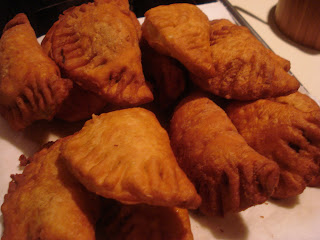 Impressions? Despite my best efforts, the dough had come out incredibly thick and you often got a mouthful of crust before you got to the meat filling. Regardless of this setback, I received rave reviews for this effort. Although, I’ll warn all my readers that this recipe isn’t correct about some of the portions. It states that these amounts are good for 26-28 meat pies. I’ve already made two batches of dough and I haven’t even used half the filling.

In the end, even with the frustrating dough, I was glad I went out on a limb to try this recipe, if only for the confusion they created. Every time I told someone I was making Natchitoches meat pies, I would receive a look of utter disbelief and confusion, but once I told them it was a fried meat pie, they were more than happy to taste.

Very interesting. I ate one meat pie last week at my friend store and fell in love with it . I will try your recipe soon .

I grew up in Natchitoches and loved to have a good meat pie. The best ones I bought were from a lady who made them from her home. Wish I had the recipe because the seasoning was just right and an excellent difference is that she added a little shredded cheddar cheese in with her filling.

I am originally from Alexandria, LA, a short 45 minute drive from Nachitoches. I absolutely adore these little pockets of heaven. The last time my boyfriend and I made the pies at home in New Orleans they turned out to be almost identically to your picture. I used the official Nachitoches meat pie festival website's recipe and it still turned out all fluffy. I am about to try it again using another cookbook. Wish me luck! Btw... Lasyone's of Nachitoches uses 80% beef and 20% pork. I found that interesting.