A few weeks ago, needing to pick up a suit at Perlis, I found myself in New Orleans for the night. I had planned to finally try K. Pauls, but an underground gas explosion left both my dinner plans and much of the quarter without power. I decided to give Brigtsen’s a call, and with quick reservations made, I got in my car and made my way up St. Charles.

Brigtsen’s was the same as before, but there were some new things for me to try. Luckily, it was the very beginning of soft shell season. 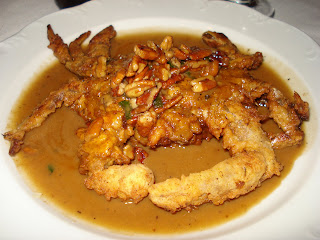 It’s hard to beat a good soft shell, and this soft shell crab in meuniere sauce was delicious. The sauce was rich, flavorful and bordered on overpowering the flavor of the crab, but like the seasoned pro that he is, Frank had reeled in the flavor just enough.

Wanting to try something besides the veal with oysters, I went for the duck. 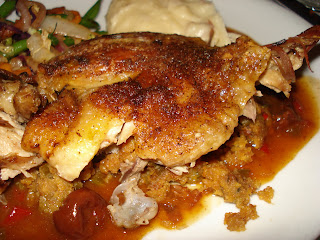 Here the duck has been deboned and it set on top of a bed of jalapeno corn bread, and the whole thing is surrounded by a cranberry sauce. Quite frankly, I was disappointed. The duck was well cut, but just lacked any real flavor. The best part of the plate was the cornbread, though even that was just lacking the fine tuned punch that I had come to expect from Frank Brigsten’s dishes.

As much as I enjoyed my time at Brigtsen’s, I feel let down by the duck. Especially since people have said it was one of his best dishes.

For my first visit to Brigtsen's, please click here